Planning my epic six-week solo trip to Southeast Asia, one of my biggest concerns — second only to how to prevent mosquito bites — was how to stay connected abroad, cheaply. Friends chided my attachment to my phone because I’m supposed to be on VACATION. But, come on. Nowadays your phone is your map, taxi hailer, restaurant finder, travel guide, translator and currency calculator. A connected phone is an asset when in unfamiliar territory.

I have a Verizon account so already had experience with its TravelPass international plan. It’s when you can take your domestic plan abroad for $5 or $10 a day depending on country, no surprise roaming charges. But since I would be gone for 44 days that was too cha-ching for my budget. 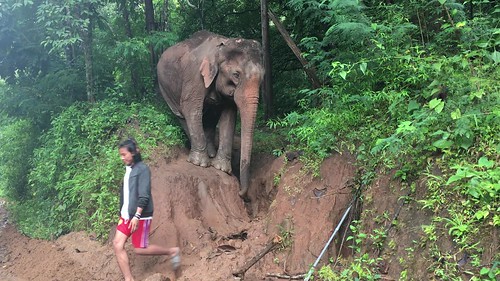 Fortunately enough, Verizon lent me a TravelPass-equipped Google Pixel smartphone for my adventures. That way I could see just how seamless the connection was, whether hiking with elephants in Thailand or sitting on the back of a motorcycle in Vietnam.

For good measure I also brought my own Verizon iPhone 6S+. That way I could test out using SIM cards in other countries since they were touted as a cheap and easy option. Note: This only works if you have an unlocked phone. But all of Verizon’s phones come unlocked!

Here’s how both plans fared.

The Google Pixel with Verizon TravelPass was especially handy in China considering WiFi with VPN was soo slow.

For international travel, in addition to the TravelPass, Verizon offers a monthly plan that’s $15 to $40 for 100 MB of data, depending on country. Or there’s the expensive-sounding pay-as-you-go option, which is $2.05/MB of data.

For the first part of my trip through Singapore, Cambodia and Thailand I primarily used the TravelPass phone. And it was like using it in the U.S. in that you didn’t have to worry about mystery charges. In terms of a signal, just like back home, there were only a few remote spots in Cambodia where I got nothing. No biggie, though.

In China, the phone worked wayyy better than when I used WiFi, and I was literally and figuratively lost without it. While sitting at the Bund in Shanghai planning my next move, I realized I lost my signal. After a brief moment of panic, I figured that I must be in a dead zone so just walked away from the river till I got a signal again. Pfew!

Bonus was that even though everyone else in China has to use a VPN to access Instagram or Facebook, I was still able to post on social media with the TravelPass phone. Plus the connection speeds on the Google Pixel were faster than when I was on WiFi with my iPhone, which was essentially a brick in Shanghai. (I didn’t buy a SIM card in China since I was only there for a couple of days.)

Panic when I lost my phone signal in Shanghai.

The downside was since the Verizon phone had limited data I had to wait till I got WiFi to post pictures and video on social media. If you have an unlimited plan, however, this is a nonissue.

The data thing may not be a big deal if you use your phone the way you do at home but in another country of course you’re gonna use it A LOT more to get around. At $10 a day the Verizon TravelPass option is expensive but will do in a pinch. For longer stays this is where the SIM card is the better bet, especially considering an unlimited data SIM card in Vietnam is about $12 and in the Philippines it’s $20 for 8GB.

Pros: No hidden roaming charges, easy to get, seamless service

Cons: Can get expensive at about $10/day, limited by how much data you have on your plan (but if you have unlimited hooray!)

My personal iPhone with SIM card was my primary phone while in Vietnam.

People online have complained about how getting a local SIM card abroad can be a pain in the ass, especially if you don’t speak the local language. The good news is a lot of Southeast Asian airports, at least the ones I traveled to, are littered with SIM card kiosks where the salespeople speak English. The bad news is even though these will be licensed vendors their prices are marked up considerably because airport. So research which phone company offers the best deal and best signal before you arrive.

If you have a local friend, ask them for their opinion. My Airbnb host in Vietnam recommended phone company Viettel, saying it had a better signal if I was planning on going to the countryside, which I did for the Cu Chi tunnels tour. But if you don’t get a chance to research before the trip just tap into the airport’s WiFi and Google the SIM card companies before buying.

Hitting max data on my @verizon #travelpass #googlepixel so now trying out a SIM card w/unlimited data on my own phone. Only $12! pic.twitter.com/e4lPGBitzI

Even though I knew the prices at the airport are higher than outside I went for it because I wanted to get online as soon as possible. It’s an addiction, really. And if you’re the same way just make sure that you get what you pay for.

I didn’t have any issues myself but reports from other travelers who had also bought Viettel cards from the Ho Chi Minh City airport complain they were shortchanged. Many shared stories like paying for five days of unlimited data only to have their card stop working after two days! I know, yuck.

With a local SIM card you get the good and bad with local service. In Vietnam connection speeds were fine. But in the Philippines they sucked big time. When I complained to my cousin there she said that’s just how it is in the P.I. and the signals are notoriously bad. I had gotten a Globe card because I read online that it had less traffic than the Smart SIM phone company but it was still difficult to connect.

By the way there are some SIM cards that you can use in a number of countries, like Viettel can be used in Cambodia and Laos, too.

Cons: Hassle of finding a good deal, danger of getting scammed

In the Philippines, since the local phone company’s signal was horrible I had to stick to WiFi.

Nowadays free WiFi is more readily available, which is great for posting your vacation photos and videos to Facebook. But when you’re abroad you’re going to actually need a more reliable signal to guide you through unfamiliar countries. Whether you go for something like Verizon’s TravelPass plan or local SIM cards depends on how much effort you want to put into it and how much you want to spend.