If you love holiday libations then you’re in luck as L.A. has no shortage of festive winter cocktails. But of the many offerings this year, the ones that really stood out to me were the ones off Big Bar’s winter cocktail menu which debuted just yesterday. Leave it to bar manager Cari Hah and her team to take a season of good cheer and amplify it with drinks that will give you the warm fuzzies. A chocolate mint fizz, a light and frothy nog, and a Jager toddy! Christmas came early!

I was fortunate enough to get a sneak taste of the drinks, running through the entire 13-drink menu with fellow cocktail enthusiast Daniel “Thirsty in LA” Djang. Couldn’t ask for a better drinking companion!

Here were my favorites off the new menu.

Who says a wintry peppermint cocoa cocktail has to be rich and heavy? This ingenious take on a favorite winter treat makes it possible to enjoy it more than once. The sweet creme de cacao is balanced by the bitter mintyness of the Fernet Branca and lightened by the froth of the egg whites and club soda splash. “The peppermint aspect of this cocktail comes from two kinds of mint,” says Cari. “We use Wondermint Liqueur made by Death’s Door Distillery in Wisconsin. This mint flavor is deep and rich and there is also a bit of St George Absinthe which adds to the depth of the liqueur.” On an unrelated note, I want to buy a tub of that Andes peppermint baking chips they sprinkle on top of the foam!

Named after the mountain that overlooks Whoville atop which the Grinch spends his time scowling at all those annoyingly happy, peppy Whos. This stirred cocktail will make anyone’s heart grow three sizes. A well-balanced and aromatic mix of whiskey, applejack, amaro and sherry, it actually makes me salivate WHILE I’m drinking it.

During a time of rich, intense flavors, this banana rum cocktail is a refreshing change of pace with its layers of subtle but interesting flavor combinations. The banana, which is muddled from a strainer, comes forward first with the earthinesss of the anise showing up midpalate. I could drink this all day and night.

Imagine yourself sipping on something while sitting under a Christmas tree amid gift wrapper carnage. It would probably be this cocktail you’re enjoying, a spice-infused crusta with the warming flavors of cognac and rye; heavy anise on the nose. By the way, you gotta appreciate how the sugar on the rim here is fine enough to resemble actual frost on the glass.

For those who were unlucky enough to catch that damn cold that was going around recently, you’ll totally understand when I say this is the drink your body was seeking out. “As you drink it, the warmth spreads from the drink to your whole body and it’s so comforting,” says Cari and she’s right. That ginger combined with the heat of the cocktail just soothes your body and soul. 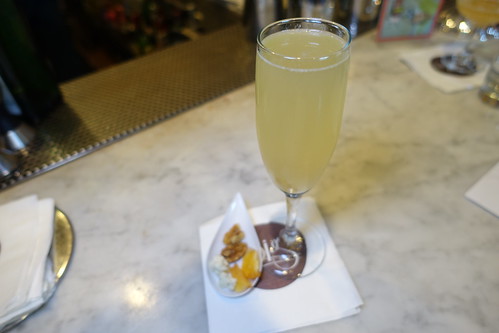