This weather is crazy. 84 degrees in the day time and dipping down to brrrr! 57 degrees at night. You gotta love autumn in L.A., though, where our trees don’t signal the change in season but our drinks do. And at this moment our bartenders are transitioning from those light, poolside libations to flavorful sippers with ingredients like pumpkin. Lots of pumpkin. For your convenience, I’ve culled the standouts from your favorite L.A. bars’ new fall menus. Lots of really good ones this year. More than just cider or pumpkin martinis but drinks with stout beer syrup, tobacco brown sugar and peated clove tincture! I get the warm fuzzies just thinking about it.

Craft‘s Daddy’s Thermos: Buffalo Trace, Fernet Branca, Zirbenz Alpine Liquor, mulled apple cider. Now this is what you’d drink after getting caught in an unexpected downpour. Strip off those wet things and change into your jammies and warm up with this apple-y goodness. Oh, you’re at Craft. Oh well. The bar will do nicely, too. This innocuous-looking cocktail is actually pretty potent. The heat of that bourbon continues warming where the warm cider leaves off. For those a-feared of the Fernet, here it only shows up as a whisper of herbaceousness.

Corner Door‘s Hoodlum: Armagnac, housemade Pumpkin Liqueur, Peated Clove Tincture. Another pumpkin cocktail, yes, but if you’re not into the sweet pumpkin ‘tini stuff this is the drink for you. A well-made concoction which evokes the warm, spiciness of a fresh pumpkin pie. I liked this so much I named it one of my top 10 favorite L.A. cocktails on Eater.

Cana Rum Bar‘s Manhattan-Fashioned: Russell’s Reserve Rye, California vermouth syrup, bitters & a twist. I was torn between calling out Cana’s beloved Pumpkin Colada and this one. But I just loved the idea of combining two of my favorite classics in one cocktail!

**Lucques‘ Sour Scotchman: **Famous Grouse Scotch, stout syrup (stout beer, sugar, star anise, cloves, vanilla), lemon juice, egg white, bitters. Stouts are my go-to beer for the colder seasons and combining a stout with scotch seems like a natural fit for a fall cocktail. The smokiness and richness of the ingredients are lightened up in this sour. 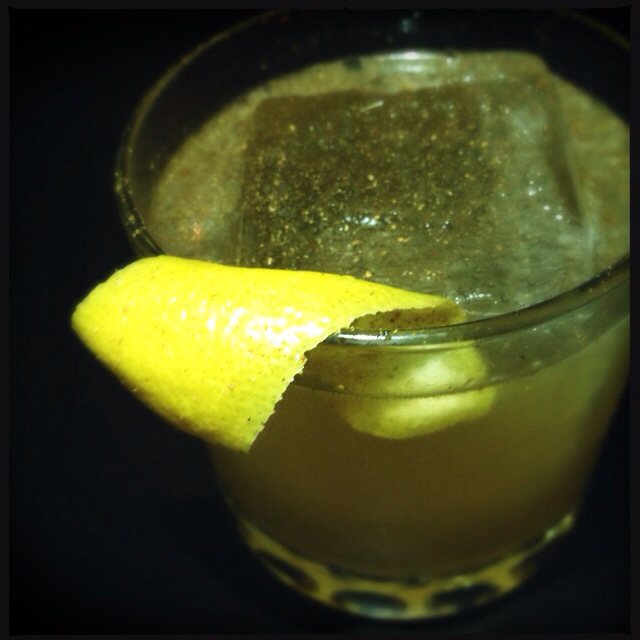 Chi Lin‘s Nameless Cocktail: Yuzu, LA Mill “No Signal” Herbal/Organic tea syrup, Bol’s Genever, topped with piping hot water and garnished with an orange wheel, and just a pinch of freshly grated Cinnamon. Barman Aaron Alvarez came up with this cocktail when he was suffering from a cold. “I am just getting over one of the worst colds/sinus infections I have had in a very long time. This may account for how I was inspired to fix this little beauty. It is quite comforting, and delicious. ” So it’ll cure what ails ya! Aaron said that the only issue is that he can’t think up a name for this cocktail, which will appear on the upcoming menu. But if you have any ideas, he’d love to hear them.

AOC‘s Pistachio Colada: Matusalem rum, St. George rum agricole, pistachio syrup, lime juice, passion fruit. There’s something comforting about pistachio and the fact that there’s a whole tropical style drink highlighting it makes me happy beyond words. Barman Christiaan Rollich admits that he went through several versions before settling on this one before you. “I called it many different things, tried out many different ways, tequila worked great as well. But with the creaminess of nut syrup I had to go with rum,” he said.

Larry‘s Real Voodoo Stuff: El Dorado 12-year rum, tobacco brown sugar, Laphroiag rinse, lime zest. Larry’s in Venice is celebrating its newly acquired liquor license with a crafted cocktail menu by Jennifer Lane Oakley, formerly of Waterloo & City and Black Market. Out of all the new drinks, this Old Fashioned variation called to me the most. tobacco and Laphroiag? Sssmokey! Jennifer was inspired by a photo of the bar’s namesake, artist Larry Bell. “There is a photo of him with his friends on the beach that hangs on the wall right by the bar, where he’s smoking his trademark cigar.  I decided to use tobacco brown sugar to give this drink a nice, full sweetness with just a trace of that nicotine burn. The brown sugar gives it a unique depth.”

Bestia‘s Yes, Chef: Lardo-infused Buffalo Trace, hickory smoked simple syrup, Angostura bitters, pinch of sea salt and orange twist. Yes, another Old Fashioned but I love the added complexity of this one with its smokey simple syrup and the dash of salt which drink creator Jeremy Simpson says brings “out the subtle flavors of the pork fat and bring everything full circle.” Yeah, definitely not veg-friendly cocktail, but you can try it with the regular bourbon.

Matthew Biancaniello’s Little Mary: This spin on a Bloody Mary uses Clover‘s new juice, Fall Seasonal, which is made with  tomato, spinach, garlic, cabbage, cucumber, celery, lemon. If you want to grab one on the cheap, Clover locations have a weekday happy hour 2:30 to 4:30pm when you can get $2 off a juice or shake for $2. Here’s Matthew’s recipe to make at home.

Little Mary
by Matthew Biancaniello
– Muddle lime juice, olive juice, red bell pepper, dill, clover juice and horseradish.
– Add Aquavit and ice and roll the drink back and forth 4 times between the two large tins (DO NOT SHAKE)
– Strain into a Collins glass with ice, add the salt on top and the asparagus spears down the side of the glass