For this year’s LA Craft Beer Crawl, I tried a different strategy with tackling over 100 beers. Taking Beer Chick Hallie Beaune’s advice I mapped out my crawl route based on the beers I wanted to try instead of the bars’ proximity to each other, like I did last year. The problem with doing it that old way was it was easy to just settle into a bar as well as fill up on a lot of beer, making it difficult/impossible to ever get to all the ones on my bucket list.

Don’t get me wrong, there were a lot of amazing brews on this crawl, The Beer Chicks curated the list after all, but many were old favorites that I routinely pick up anyway or had before like Firestone Walker DBA, Sierra Nevada Porter and The Bruery Mischief. “Take the map and circle the beers you really want to try,” Hallie said. So that was the first thing I did. And it was a great way to narrow things down.

Narrowing the list down was key considering I started on an empty stomach when I tried the two featured sours (The Bruery’s Sour in the Rye and New Belgium’s Yuzu Fruit Imperial Berliner) at The Varnish. Even after I filled up on a grilled cheese sandwich and tomato soup, I was already feeling my sobriety ebb away. So as much as I wanted to check out the Micheladas and Sierra Nevada’s Porter at Las Perlas across the street, we had to make the mad dash to Seven Grand before the VIP time was up so that I could get a taste of The Bruery’s Or Xata, horchata blonde ale, and Eagle Rock’s Imperialist. 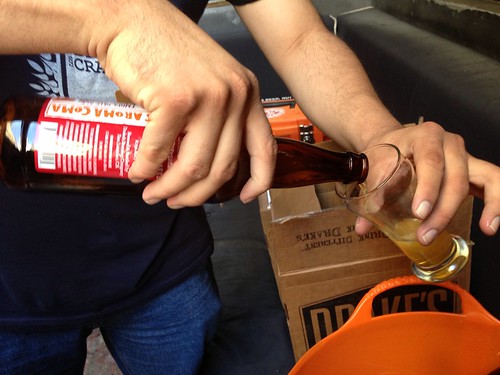 Fortunately, since the annual craft beer crawl has been expanded to two days, a majority of the imbibers showed up on the first day, Saturday, which was sold out. While hard-core drinkers who won’t let a little thing like a beer crawl on a school night stop them,  like 1886 bartender Brady Weise and Thirsty in LA blogger Daniel Djang, opted for the less crazed Sunday. There were less lines, more room to breathe, more available seats and, most important, seconds on Cana beer floats.

I didn’t go crazy this year trying to drink as much I could get my lips on, but I was still thankful that I stuck to my drink list — and had a designated driver lined up (the Metro and Lyft). Here were my favorite brews out of the ones I tried. Many were limited release so hopefully I’ll get to taste them again.

1. The Bruery’s Or Xata: This is The Bruery Preservation Series’ experimental beer which will be released to Preservation Society members this October (huzzah!). As weird as it sounds it’s pretty trippy  how it starts off tasting like that creamy, non-alcoholic cinnamon-vanilla rice drink and then transitions into a blonde ale. I thought for sure this would just be a sticky sweet beery version of horchata but then I remembered it’s The Bruery’s creation so of course it was done well. If you want to try it for yourself, it’s currently on tap at The Bruery’s tasting room in Placentia with bottles for sale! The Bruery’s Benjamin Weiss said that it’s really popular, however, so may be gone within a couple of weeks.

2. Eagle Rock Imperialist: Eagle Rock debuted this double IPA just last year and it’s currently on tap at Eagle Rock Brewery! Hallie described this 10 percent full-bodied DIPA as a “smack-yourself-in-the-face kind of beer” so I was expecting it to be uber hoppy and funky. But instead it was super drinkable and refreshing with its citrus and pine flavors. It was high ABV but didn’t taste like it which is dangerous. I’d gladly do another taste but since I was in the midst of a beer crawl, I didn’t want to knock myself out of commission. Yowza.

3. New Belgium’s Yuzu Fruit Imperial Berliner: At the start of the crawl, I immediately made a beeline for The Varnish which was showcasing bitter, sour and barrel-aged specialty beers. The beers there were available in limited supply so I wanted to get a jump on them. This new beer by New Belgium was my first one of the crawl. And after a quick walk from Casey to The Varnish in the hot afternoon sun, I was parched. This 8 percent imperial Berliner Weisse ale with yuzu juice was the perfect way to sate my thirst. For those not accustomed to sours, this was a very approachable one. A light, tropical sweetness with a dry mouthfeel. It’s currently available through the fall.

4. Drake’s Brewing’s Aroma Coma: To think I was about to dismiss this summer American IPA simply because I’ve had it before. But since it was just right across from Goose Island’s taps at Golden Gopher, which I had purposely sought out for the stout, I figured I might as well. And thank goodness I did. After that too-rich Goose Island Bourbon County Coffee Stout, this 6.75 percent IPA was a godsend. For this year’s Aroma Coma, the brewery built the beer around their best hops. Made with a combination of El Dorado, Citra, Amarillo, Cascades and Chinooks hops it’s very fragrant and hoppy. It’s currently available for sale in bottles at good beer stores.

5. Goose Island’s Bourbon County Coffee Stout: When the person manning the taps for Goose Island handed me my taster glass back after pouring this stout at first I was peeved. I love dark beers and wanted more of this Russian Imperial Stout that was brewed with Intelligentsia coffee and aged in Heaven Hill Distillery bourbon barrels. But after just sipping it, I was dead drunk. OK, not really but at 14.3 percent ABV it was really potent, reminding me of the Bruery’s Black Tuesday which is a sipper itself. This coffee stout was rich and thick with a deep coffee flavor. The quarter pour in my taster was more than enough. I don’t think I could do much more than that unless I didn’t have plans for getting out of the house that is. If you see a bottle out in your travels, snatch it up and cellar it.