What To Drink Off The Eveleigh’s New Summer Cocktail Menu 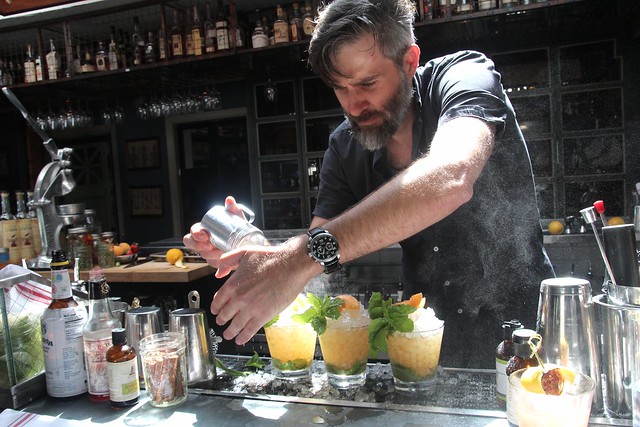 The Eveleigh’s David Kupchinsky in a cloud of sugar.

I love summer but, truth be told, am not a huge fan of most summer cocktails. It’s for the simple reason that I don’t like ice in my drinks. Unless it’s a big, slow-melting rock. But pellet ice or cubes in a tall drink? Nah! With iced drinks I just feel compelled to suck them down asap for fear that they will get too diluted and past their drinking prime. So when David Kupchinsky, aka Ol’ Man Winter, of The Eveleigh on Sunset Boulevard said that his new summer cocktail menu features several light aromatic cocktails, I did a little happy dance. His new menu also boasted “the world’s greatest Hotel Nacional” and a barrel-aged cocktail that, for once, I wasn’t mad at. On a Sunday afternoon, with drinking buddies Thirsty in LA and Louis of Miracle Mile Bitters, Dave took us through his menu. Although all were delicious, here are the ones that stood out to me. 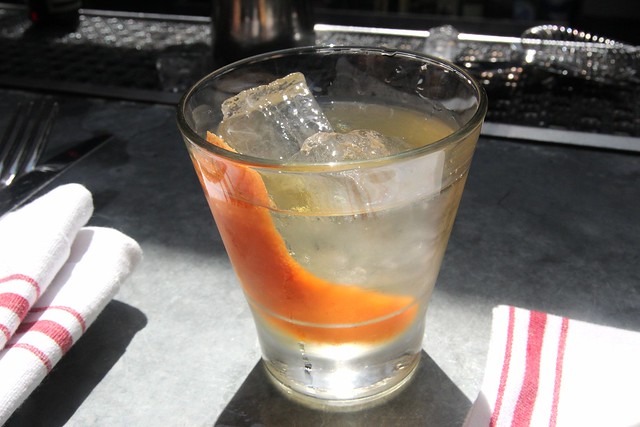 The Oaxacan Angel, a cocktail Dave first made while he was still bartending at the Tar Pit on La Brea, is a perfect example of a summery aromatic cocktail. Even though it’s made with mezcal, it’s light and bright. “People automatically go for darker, deeper, richer wintery flavors in Old Fashioneds. I love this one because everything in it is bright,” said Dave. “It brings out the high bright agave notes. Instead of taking it down to winter spice.” It really is a beautiful mezcal Old Fashioned with an initial silky texture. Slowly it dilutes into a very approachable mezcal drink. The smokiness of the spirit here is not in your face but brightened up with the grapefruit. So adamant was Dave about his bartenders not going into that predictable dark place with tequila and mezcal drinks that he banned them from using chocolate-chili bitters with those spirits. 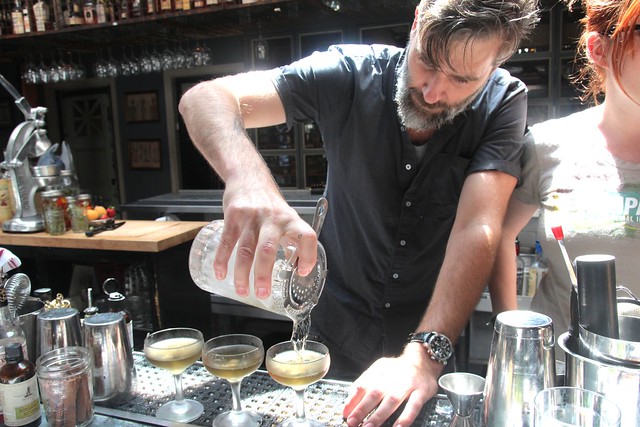 Barrel-Aged Embury Cocktail. I’m usually not a fan of barrel-aged cocktails. Even though it’s a neat idea in theory, I don’t like how it mellows out a cocktail. But here, it works. Dave barrel-aged a mix of navy strength Plymouth, yellow chartreuse and Fino sherry for two months in an American oak barrel. When serving it up, he doesn’t stir it for very long and keeps it underchilled since dilution, he says, weakens it. “It’s a lot better stronger. It might not be as cold as you’d normally have a martini but it tastes a lot better,” he said. It’s a light aromatic that’s just perfect for day drinking. 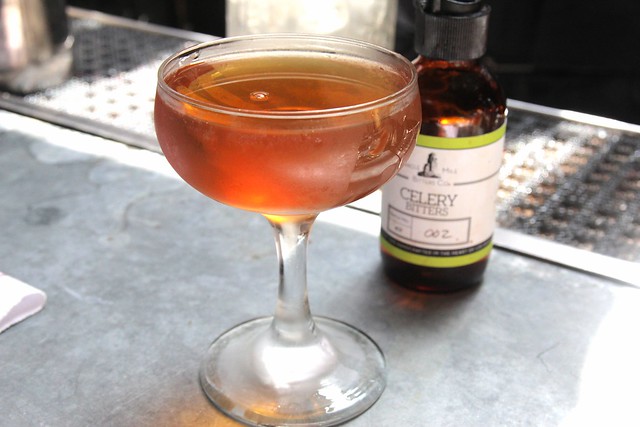 Song of Solomon. I’ve been looking forward to this cocktail ever since Dave told me about it for my LA Magazine Digest post on summer cocktails. It took him two months and about $1,000 to perfect this, trying to find the right bitters to complete his version of Chad Solomon’s Bensonhurst cocktail. One night he went so far as to make 15 versions with 15 different bitters and lined them up to taste them. And he even asked Louis Anderman of Miracle Mile Bitters to create a rhubarb bitters, thinking that would be what this summer cocktail needed. In the end with only two days til he had to change the menu, out of desperation he tried it with the Miracle Mile Celery Bitters. And wouldn’t you know it, it was perfection with the celery complementing the Cynar and bringing about a salty umami flavor in the back palate. If you’re a hard-core Manhattan drinker who’s looking for a day-friendly version, look no further. 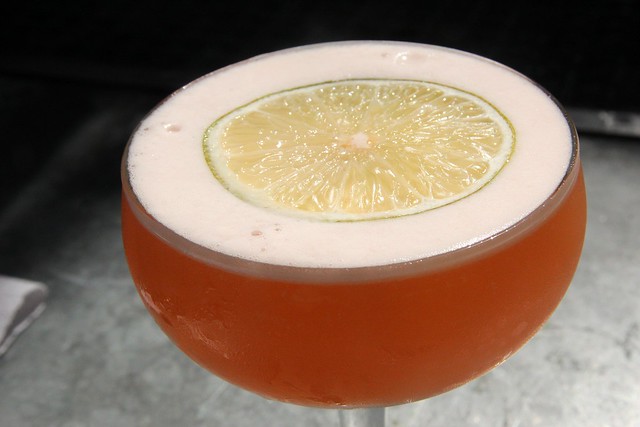 World’s Greatest Hotel Nacional. Dave made two versions of this for me and my companions; one with aged rum and the other with light rum. Even though both were delicious we agreed that the light one was better in its brightness while the aged version was comparatively one note. It might have been because Dave added a few dashes of bitters to the light rum version, though.  But for this Dave threw down the gauntlet: “I’ll challenge any fucking bartender or any fucking cocktail nerd in the world to put their Hotel Nacional against mine.”

Mustache Ride wasn’t listed on the summer menu since it was dependent on when the tomatoes were at their peak. “I don’t even want to eat a tomato unless it’s this time of year,” he said. “This right here is another example of the ingredients just speaking for themselves. This drink is just automatically going to be good and you can only fuck it up.” This savory, spicy mezcal version of Tommy’s Margarita really is a beautiful stand-in for a Bloody Mary during day drinking. During the course of our tasting we discovered that the Celery Bitters gave it more depth. Love! It’s fun to play with bitters!