What To Drink at Goldie’s LA 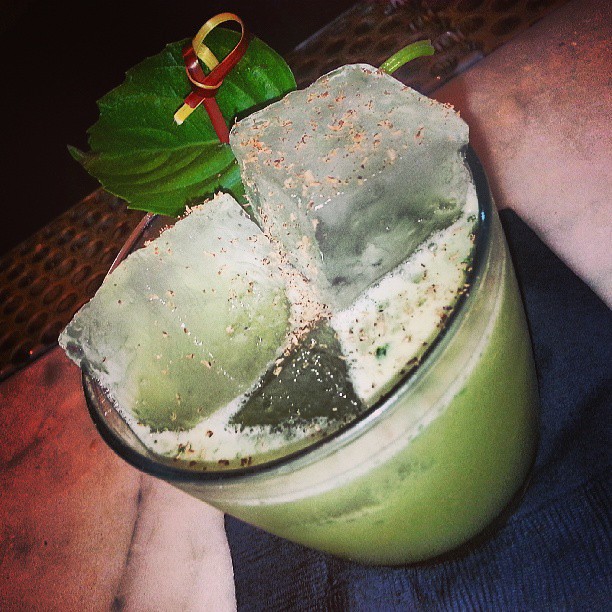 I had heard about Brittini Rae Peterson’s cocktails at Goldie’s LA in Mid-City West since before the restaurant opened in March. Goldie’s is the newish restaurant by the guys behind The Eveleigh so it wasn’t a coincidence that The Eveleigh barman’s Dave Kupchinsky could not stop talking about them. Ran into him at Short Order at the Farmers Market before the restaurant’s opening, he mentioned how I had to go check our her cocktails. Then last week he Facebooked me, “You should check out Goldie’s. She’s killing it.” Finally I got the hint. I mean, I didn’t doubt him, besides I was familiar with her delicious work at ink.

So I stopped by the restaurant on Friday, before the dinner rush which, I’d say, is the best time to go. There were still seats available at the bar, my favorite place to sit. The new restaurant reminds me of a truncated version of the Eveleigh but the outdoor patio was out front, the beautiful bar was on the immediate right backed by a tall wall of shelved liquor bottles and the dining area on the left. A garage door, which normally separates the dining room from the patio, was raised up inviting in the evening air. The crowd on Friday night was the sort you normally see on this stretch of WeHo/Beverly Hills adjacent, lunching at Toast and Joan’s on Third: beautiful 20- and 30-somethings with their casual designer attire. 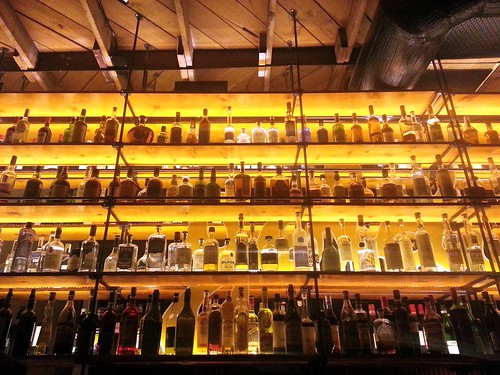 Brittini actually built Goldie’s bar from scratch. “I’ve never gotten to build a bar. The only thing that they had when I got here was the refrigerators so I literally ended up designing the bar between the speed rail, wells, and I got to pick out the entire back bar selection.”

To complement the chef’s California fare her spirits inventory is primarily Golden State with general American thrown in. The cocktails are comprised of what’s in season. “Next week apricots just came in season so we’re doing an apricot sake with IPA.” Yum!

I have to say that out of necessity I’ve made it a habit to not finish the cocktails I sample at cocktail tastings, and this was one of the rare cases when I just couldn’t help myself. Knowing that my bf was my designated driver facilitated this, too, but usually even when I have a DD I like to maintain some semblance of professionalism AND remember my experience. But, no, here, I basically finished all four cocktails Brittini set before me. Not counting the Not-an-Irish-Coffee one which came in two variations (one with navy-strength rum) and isn’t even on the menu yet.

Her classic-inspired drinks are well balanced, fun and innovative without being polarizing. If you just want a straight drink, go with the Manhattan-variation, Battery Park. If you want something light, there’s the Aperol Spritz on tap. For something a little more adventurous, try the 3rd Street Mai Tai. And to get your tastebuds going before dinner, order up the 6 Degrees.

The Stories Behind Goldie’s Opening Cocktails

Aperol Spritz: This cocktail is currently on draft and will be replaced by a Moscow Mule in a couple of weeks so order one up while you still can. Like I said, if you’re looking for something light to kick off your evening, or even better your day drinking, this is the one to have. It’s bright and not too bitter and actually well balanced. Past draft cocktails I’ve had usually end up too sweet, syrupy or one-dimensional. Not this one. Brittini chose this cocktail to put on tap because Goldie’s owner and chefs are big fans of Aperol and Campari spritzes. “It’s pretty much a traditional spritz recipe but instead of using prosecco there’s a Sauvignon Blanc in there and then I add citric acid so that’s how you get the bubbles. It’s mineral water, Aperol and then I add a little bit of a grapefruit shrub to make it a little more tart so it’s kind of a blend between an Aperol and a Campari spritz. Citric acid helps preserve the freshness and luckily for me our walk-ins are kind of tiny so they’re small kegs. It’s pretty much a fresh batch every 24 hours.”

Golden Girl: Spiced tequila, passion fruit, agave, lime meringue. This is a mainstay cocktail and the most popular with Brittini going through four and a half bottles of tequila on busy nights. She has worked on the cocktail for three years. “I started at the Tar Pit, I brought it to ink for awhile. It was the highest selling cocktail there and then I brought it here.” 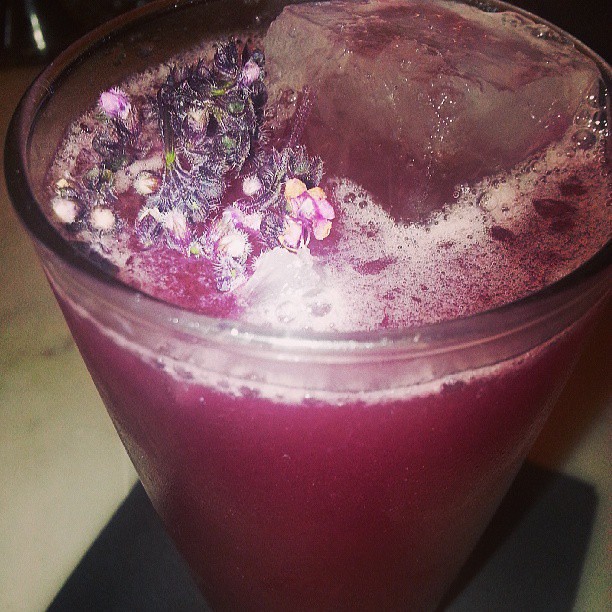 6 Degrees: I liked how when tasting this cocktail it started up with the smokiness of the mezcal and then the vinegariness of the shrub came through, making me salivate. Definitely the drink to have before a meal. So drinkable. And I’m not normally a fan of beets but fortunately that earthiness didn’t come through too strongly in this cocktail. “The whole point was to put a bunch of things in the drink that were the same color so it’s fresh beet juice with opal basil, a dark red basil, and then I use a sherry vinegar,” said Brittini. “There’s that and mezcal and I use a Quinine liqueur to add some bitterness to it and then I top it with a little bit of gingerale. It’s like a sweet and sour drink. You drink it and you keep drinking it. It makes you always drink more because it leaves this very punching aftertaste which is either a good or bad thing.”

Summer n’ Smoke: Smoked vodka, gentian root, salted grenadine, orange soda, topped with grapefruit Campari foam. “That’s a hard one because people who like vodka hate it because the smoked vodka is very smokey, we smoke it in house on the woodfire grill. It almost has a Campari flavor to it. It’s a very good aperitif cocktail but it is very bitter. Negroni lovers, whiskey lovers really like this cocktail and vodka drinkers are like, ‘Wuuuut?'”

Grandma Mary’s Amaretto: Homemade amaretto, bourbon, lemon meringue, orange bitters. Brittini makes the amaretto liqueur in house based on her great-great grandmother’s recipe. “My grandmother’s grandfather owned a speakeasy during Prohibition and his wife used to make her own liqueurs to make the crap moonshine taste OK so it was her recipe.” 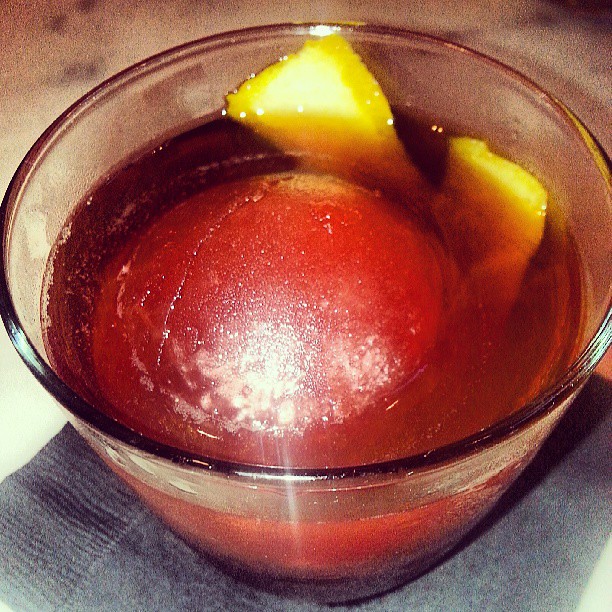 Battery Park: This cross between a Manhattan and an Old Fashioned is Brittini’s personal favorite and one that she would drink to the last drop. I have to second this. Manhattan fans will appreciate this variation. It’s smooth and well-balanced and I love the idea of the Peychauds ice sphere. Unlike other Manhattans on the rocks that get watered down by the ice melting, this one gets more bitter. “It’s called Battery Park because there used to be a sphere at the World Trade Center that they moved to Battery Park and there’s an ice sphere, and it’s a Manhattan variation.”

3rd Street Mai Tai: Toasted coconut rum, dry curacao, orgeat, fresh basil, Miracle Mile Bitters chocolate chili bitters. Tiki fans will argue that this isn’t technically a Mai Tai nor a variation but whatever the case, it’s a fun drink. I’d have this after a meal as it’s kind of dessert-y and sweet. For this cocktail, Brittini toasted the coconut and put it in the rum which gave it more depth than plain coconut liqueur or coconut rum would. “And then it just went from there. I used it to make a standard Mai Tai and then I felt it needed something more herbal. I added the basil and then I went crazy and literally shaved chocolate on top and put [Miracle Mile Bitters] chocolate chili bitters on it so it’s this sweet yet very refreshing drink. I can’t decide if it’s a spring cocktail or a dessert cocktail.” 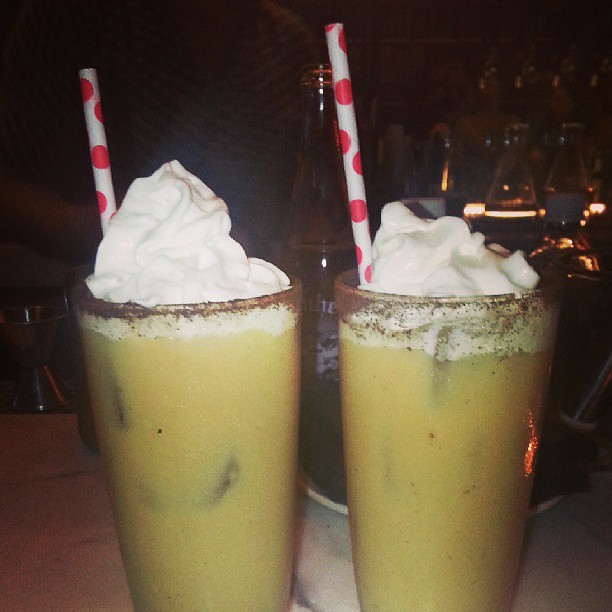 Not-Irish-Coffee (NIC): The NIC with the navy-strength rum was overpowered by its funkiness while the regular NIC might be more up the alley of folks who don’t like their cocktails to taste like booze. A delicious dessert cocktail that actually wasn’t too sweet even though that whipped cream will make you think otherwise.  “It’s a sweet, savory dessert cocktail and I like the fact that it has coffee in it.” These aren’t on any menu yet but will be offered on the dessert menu soon.