Blue Hawaiian at the Tiki seminar with Brian Miller and Julia Reiner.

When one thinks of Hawaii, craft cocktails don’t come to mind. Nope, you think quickly thrown-together “tiki” cocktails with all kinds of pineapple wedges and tiny umbrellas cocktail-blocking your way to a diabetic coma. When you don’t explore outside of the resorts and touristy areas, that’s what you’ll get. But Hawaii Cocktail Week (February 16-23) in Honolulu, Oahu, is trying to change that by spotlighting the local bartenders and bars who take craft cocktails seriously.* At the week-long cocktail event, in addition to out-of-town star bartenders like LA’s own Julian Cox and Matthew Biancaniello, there was **USBG Hawaii president and Pint + Jigger barman Dave Newman, Town Kaimuki‘s Jordan Edwards and Christian Self of Chinatown’s thirtyninehotel hosting various seminars, dinners and bartender showcases.**

There were some standout events and a few new favorite cocktails, but I found a lot of the best drinks outside of the cocktail event as is usually the case for cocktail weeks (see: Portland and Tales of the Cocktail).  At least it’s a good motivator to get out and explore outside the cocktail event. Here were my favorites.

Blue Hawaiian Cocktail at the Modern Tiki: A Pirate’s Life for Me! Seminar

Now, I usually shy away from the Blue Hawaiian, the most popular cocktail to come out of the tiki movement. The only time I’ve had it before was at hotel bars in Waikiki. Not good. So it was a shocker to find that I couldn’t put this down and had actually wanted to finish it. While Brian Miller (Death & Co) and Julie Reiner (Clover Club) were taking us through the history of tiki and carrying us through to today’s Modern Tiki, the bartenders at the event passed out liquid examples of what was discussed. We sampled macadamia orgeat, Don’s #2 spice mix and a few cocktails. Always a great way to drive home a point. Fun facts I learned: Tiki didn’t come from Hawaii, Don the Beachcomber was bffs with Marlene Dietrich, you can make a dolphin garnish out of a banana. 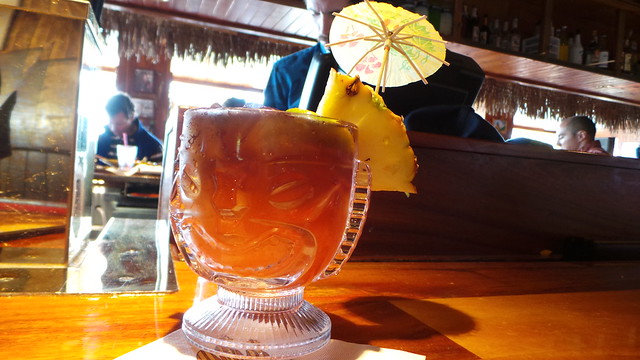 After a long absence from Oahu, my first return cocktail HAD to be the Mai Tai. Didn’t care if it wasn’t made the “proper” way but rather with “Hawaiian juices,” two rums and orange curacao. I wanted to check in to my hotel and then enjoy a Mai Tai overlooking Waikiki Beach. Surprisingly the Mai Tai at the Duke’s Barefoot Bar wasn’t overly sugary or juice-y. I could actually taste the rum! Feeling optimistic about the cocktails at this beachside bar, I followed up the Mai Tai with a Lava Flow. Yum and yum. Afterward, I’m a little hazy on what I did but I think it involved a stroll along the beach and catching my first Hawaiian sunset in a long time. 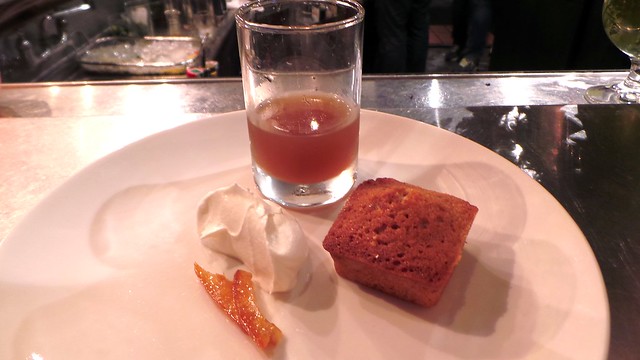 This cocktail-paired dinner, which was hosted by Southern Wine & Spirits and Beam Inc., was the standout event in terms of well-made cocktails. Everyone at the dinner who had attended the other cocktail week events (I had just arrived that afternoon) said the cocktails here were by far the best. Bar Manager Jordan Edwards pulled off the difficult feat of creating cocktails that were not only stunning stand-alones but that enhanced the courses they were paired with. For instance, the brightness of the prosecco and rum cocktail matched up to the savoriness of the risotto while the liliko ‘i elderflower shrub echoed the vanilla in the dish. Even though I had the vegetarian version of the dinner, missing out on the lobster in the risotto and the pork skin in the lentil salad, the meal was still incredible. 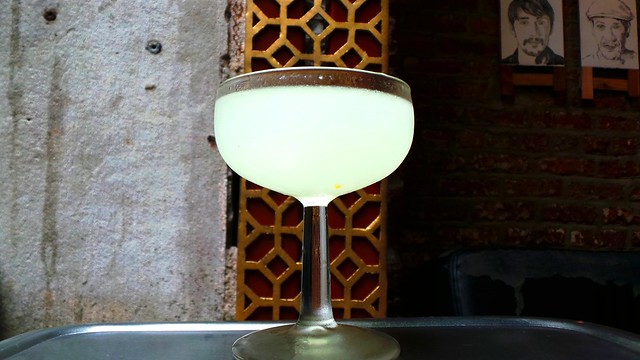 OK, this wasn’t OMG beautiful but the fact that it was a margarita enjoyed on a really rainy day in this lovely Chinatown bar made it one of my favorites. After having had my fill of tiki cocktails, this lime-y margarita made with Sauza Silver was a nice change of pace. I definitely preferred it to the other cocktail they were serving at the tasting, a watery Paloma. The margarita came in the middle of the tasting; after finishing it off I followed it with a tasting of the surprisingly light Tres Generaciones Anejo. 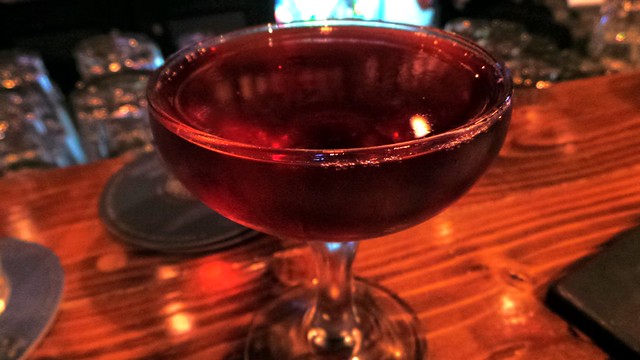 At Hawaii Cocktail Week, my new best friend became Jen Len of Cana Rum Bar. She’s so fun! And being from Oahu, she had some great tips about what to do there. Since she had been at the cocktail week since it started the previous weekend she attended the cocktail week events at Pint + Jigger, making friends with barman Dave Newman. Jen told me all about the bar and said I HAD to check it out. They were doing new and exciting things there. And even though the wait to get in was an insane 45 minutes, it was worth it — thank goodness — once we grabbed seats at the bar. After a quick survey of the drink menu I knew I had to order up the Sous Vide Boulevardier, made with Old Overholt rye, Carpano Antica and Campari sous vide for two days with toasted Jack Daniel’s barrel chips. The cocktail didn’t have the bite I was used to from Boulevardiers I make at home but I still loved it. Plus it was like mother’s milk after several days of sugary, badly made cocktails. I followed this up with something with more bite and the polar opposite of tiki drinks: the Drawn and Quartered cocktail made of Angostura bitters, Campari, lime juice, homemade stoned apricot syrup and a splash of soda. This beauty wasn’t as bitter as you’d think it would be, though, but it was a glorious way to end the week.

_* I was hosted at Hawaii Cocktail Week_