The Taste’s Anthony Bourdain with Pappy 15 year, a gift from Chef Ludo.

To promote it, LA media was invited to mingle with the food stars at the Disney studios in Burbank over Ludo Truck chicken and fixings. Naturally, I took this as an opportunity to ask the larger-than-life food celebs about which libations they like knocking back. They are known for their impeccable palates, which will be put to the test on the new TV show which asks them to judge the creations of pro and amateur cooks based on the blind tasting of a single teaspoon. They must like the good stuff, right? 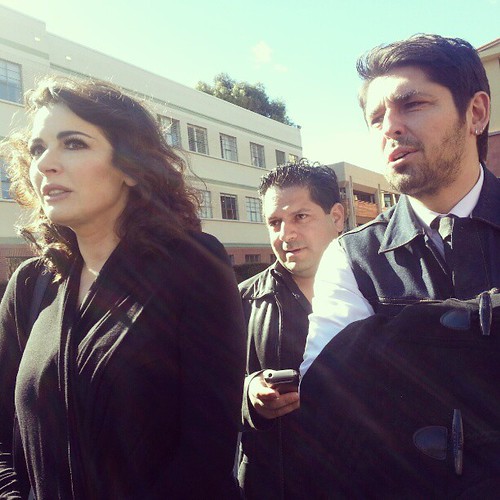 One would assume French Chef Ludo Lefebvre would go on and on about wine but he’s big into Belgian beers at the moment. “I love La Fin du Monde. It’s strong, too, one glass of that and you’re already dizzy. I’d pair that with a burger with stinky cheese.” Ludo credits living in America for his new love. All his friends drink it and even one buddy brews it in his garage. So does this mean there will be a Ludo home brew? “No, I don’t think so.” He won’t make his own beer but he likes going to Blue Dog Tavern in Sherman Oaks, near his home. “They have a lot of beer. I love it, I just love it. I want to use more and more beer in my restaurant.”

I’m such a fan of Nigella Lawson, collecting all her cookbooks, even though I don’t really cook. Heh. So I was excited to see what this gorgeous goddess, who makes snorfing down comfort food look so glamorous, was into imbibing. Not surprisingly she is all about the Americano, “the cocktail, not the coffee drink,” she clarifies. “It’s such a classic cocktail. It was the original James Bond drink in the first novel. He drank an Americano, vulgarized later into a martini. It’s equal measures of Campari, which is fantastically bitter, and sweet red vermouth and a bit of an orange peel with a spritz  of club soda. Divine.” So why doesn’t she like the Negroni, the Americano’s boozier counterpart? “I was brought up never to mix the grain and the grape because of hangover. I’m not a committed enough drinker whatever Tony [Bourdain] says. He’s spreading lies about me, says I can outdrink everyone. I’d be drunk too soon. So since the Americano isn’t very alcoholic, you can knock a lot of them back. I feel a bit pathetic like it’s the girl’s Negroni, so I feel it’s a bit pathetic. But I love it.” Although, as she said, James Bond drank it and he’s no girl.

It’s no secret that Anthony Bourdain’s favorite mixed drink is the Negroni. “Generally I drink beer. And when I’m feeling sorry for myself or not well, I’ll drink bourbon. I do like a Pappy Van Winkle 20 year. But for a mixed drink, I’m a Negroni drinker. It gets the appetite going before a meal. It settles the stomach after the meal.” He favors this classic mix of gin, sweet vermouth and Campari even though he isn’t a fan of any of the ingredients. “But together, they’re wonderful.” He credits chef Mario Batali with introducing him to the cocktail, and Italy for sealing the deal. “In spite of the fact that I’m married to an Italian, I tend to overromanticize Italy. I like the whole idea of sitting there with this beautiful drink with a little slice of orange in it in the late afternoon, looking at Italy and eating Italian food.”  Its danger element might hold some appeal, too. “They’re deadly. You really have to be careful with them. If you drink two Negronis before a meal, with any kind of wine drinking during a meal, you’re gonna have a problem getting up from the table. They pack a punch. But they keep me honest. I learned my lesson as far as drinking more than two. They’re delicious.”