Yup, these Pressed Juicery juices are the only veggies and fruits in my fridge.

OK, so I picked up my Pressed Juicery cleanse yesterday with trepidation and fear. Trepidation, because how can I possibly survive without bacon, coffee and booze for nine days; and fear over how my body will react to an all-juice diet.

Now, why am I doing this cleanse? Definitely not to lose weight as any poundage I lose during the cleanse is just temporary and will come back as soon as I start eating again. Rather, I wanted to get back on track of being healthy. In 2012 I sort of lost my way, stopped working out, stopped eating healthy. So I figure that a juice cleanse was a good way to get serious again.

Because with the Pressed Juicery cleanse, you’re not only doing juice for three days, you have to prep for the cleanse AND ease yourself out of it with a vegan diet and no caffeine or alcohol for a few days. So in total, that’s about nine days of healthy living. From there I can go back to eating healthy again and maybe feel good enough to head back to the gym. 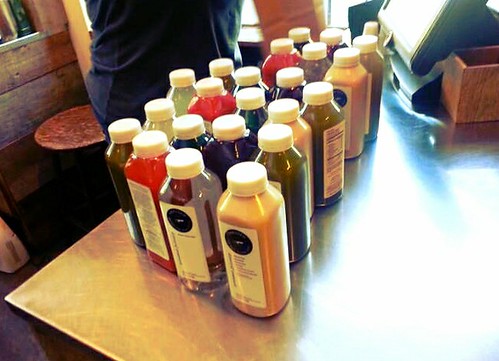 And so it begins…

So as I mentioned in my previous juice cleanse post, I wanted to start off on Pressed Juicery’s Cleanse 1, the cleanse for newbies, but the lady at the West Hollywood store mistakenly gave me the bottles for Cleanse 2, the one for intermediates who want a deeper cleanse, and I didn’t realize this til I already got home. Kind of a bummer considering I read somewhere that Cleanse 1 is more fruit-based to make it more appealing to beginner juice cleansers. Cleanse 2 has two citrus juices as opposed to two roots. But PJ’s online quiz to help determine which package I should go with had recommended 2 so I wasn’t TOO worried.

When you buy the bottles at the store, they package them six bottles per bag for ease of use every day. Instructions are simple: drink a bottle of juice every two and a half hours. The chlorophyll water is meant to be sipped throughout the day in addition to your drinking eight glasses of water. For dinner you get to have the almond juice. I’m so looking forward to that one. And the aloe water is meant to have before bedtime “to keep things moving while you sleep.”

Greens 1: Kale, spinach, romaine, parsley, cucumber, celery. When I had this before as a supplement to my lunch, it was fine. But as the first juice of the cleanse where it’s a meal? Kind of a letdown. It just tastes like cucumber water with a faint hint of celery. I read somewhere that it helps to drink juices you don’t like with a straw, thus the crazy straw here. For comfort, I had some warm herbal tea with my “breakfast.”

Citrus 4: Cucumber, pineapple, lemon, coconut H2O, aloe vera. Oooh, I really like this one. It’s a lot gentler than I assumed a citrus juice would be. The pineapple comes through more than the others but still subtle. I found myself drinking it faster than the first juice, Greens 1. 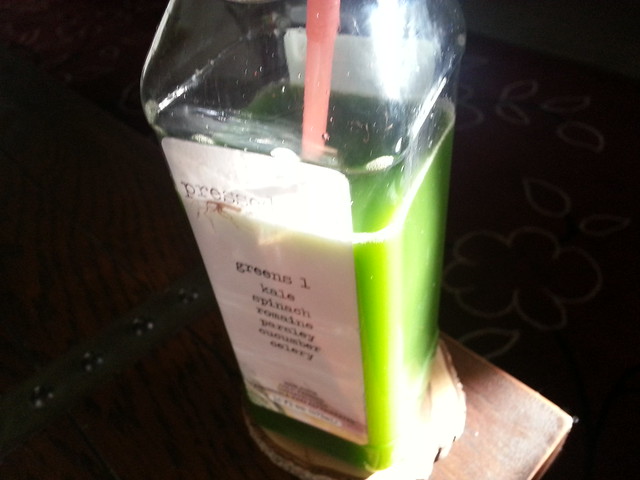 Status update: So far I’m OK. Not starving but there does seem to be a lot of action going on in my digestive tract what with the gurgling and simmering.

Roots 4: Carrot, apple, ginger. Ooh, another good one. Actually, I already love this combination of juices. Apparently, however, it’s not the favorite of newbies. That would be Roots 3, which is the same combo except with beets instead of carrots. This one starts off with the gentleness of the carrot and apple and finishes with the heat of the ginger. Nice! Had to control myself from guzzling this.

Status update: I find that I’m getting hungrier through the course of the day which makes me consider “cheating” with cucumber slices. But then I remind myself that this is only three days, it’s not forever and then I push on. I am watching the clock a lot, looking forward to when it’s time to have the next juice.

Citrus: Pineapple, pear, ginger, mint. So I had to go with this one because the popular Citrus 2 (pineapple, green apple, lemon, mint) was sold out. The PJ counterperson said this was sort of the same, just with pear and ginger instead of green apple and lemon. But I was surprised how sweet this was. It’s like juice I’d have for breakfast. The pineapple comes through the strongest with it finishing off refreshingly minty. Very subtle mint, though, not like mouthwash. Ahhhh.

Greens 2: Kale, spinach, romaine, parsley, cucumber, celery, apple, lemon. I was afraid I wasn’t going to like this one since I didn’t like the first Greens of the day but this was actually tasty. The apple comes through the strongest with a hint of the vegetables. I am not a fan of celery and thankfully I couldn’t really taste it in the juice. 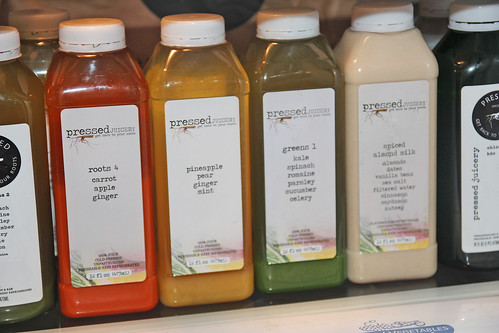 What’s on the menu for the day.

Status update: I’m surprised that I’m not as hungry as I thought I’d be. I mean, I’m not full but I’m not starving either. I did ask my bf to buy tea from the store for me since I try not to go grocery shopping when hungry. In any case, the only real discomfort I’ve experienced so far is the need to go to the bathroom so often because of all the liquids. But that just means I can’t be too far away from the nearest facility.

Almond milk: almonds, dates, vanilla bean, sea salt, filtered water. I’m already very familiar with this one as it’s my go-to at Pressed Juicery, so I was looking forward to it all day. Sweet, comforting. This is my dessert and reward for the day.

Status update: At this point in the evening, my bf came home and had brought some tacos. He didn’t want to eat them in front of me but I figured I’d be OK because, like I said, I wasn’t starving. Boy, was I wrong. I held my breath and tried not to look at him as he slowwwly ate all three of his tacos. Because of this, I went for the almond milk 15 minutes sooner than I was supposed to. Not a big deal but I was really trying hard to space the juices at the recommended two and a half hours. Sure enough, after that I was fine. I just made myself some Detox tea after to warm myself up — drinking all that refrigerated juice can make you chilly!

Chlorophyll water and Aloe water: The chlorophyll is meant to be sipped throughout the day for hydration I guess, while the aloe is what you have right before bedtime. Neither of these had any flavors. In fact I suspect that aloe water is just plain water. The only telltale sign that it’s different is a hint of silkiness but then again that could just be in my head.

Looking back at Day One, it wasn’t as horrible or painful as I was lead to believe. I wasn’t doubled over in hunger pains nor did I have a horrible headache (THAT came the first prep day off coffee). And at the end of the night, I didn’t go to bed hungry. I also liked just being able to reach in the fridge for my meal. Since I don’t really keep anything in my refrigerator other than beer, this was a novel concept to me.