In my years of CoCing, I’ve been on many a bar hop but I have to say that the Macallan-sponsored one last week that took a bunch of bloggers on a tour of three bars in L.A. and plied them with Macallan scotch had to be the fanciest. Oh hullo, here’s me sipping on a not-yet-released 22-year on a party bus. The special event was to introduce the brand’s latest in its Masters of Photography series.

For this third installment, Macallan commissioned Annie Leibovitz (my idol) to take photos of actor Kevin McKidd (Grey’s Anatomy, Rome), who actually used to work at the Scottish distillery when he was 17, in pensive Macallan moments around New York. Four photos are then featured on the bottles of four special edition whiskies which reflect the moods depicted in the shots. 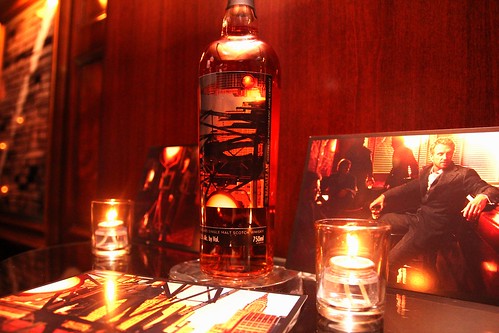 The whiskies were crafted by whisky maker Bob Dalgarno, who took single cask whiskies and aged them in different cask types. The moody Library edition was aged in a sherry oak hoghead cask and has a lingering, full finish; the sexy Gallery aged in a sherry butt cask is rich and intense; the jovial Bar aged in sherry oak puncheon is casual and soft; and the sunny Skyline aged in American oak butt is warm and fruity. If you’re actually looking to buy one of these, it’ll set you back $2,750 but comes with a Leibovitz autographed print of the respective photo in a fancy photo-archival box.

The bars on the tour — 10 Pound, Bar Marmont and Roger Room — were pitched as ones that McKidd frequents, although the actor later admitted that he prefers Chateau Marmont to Bar Marmont and it was the first time he’s been to the Roger Room, which he ended up liking. 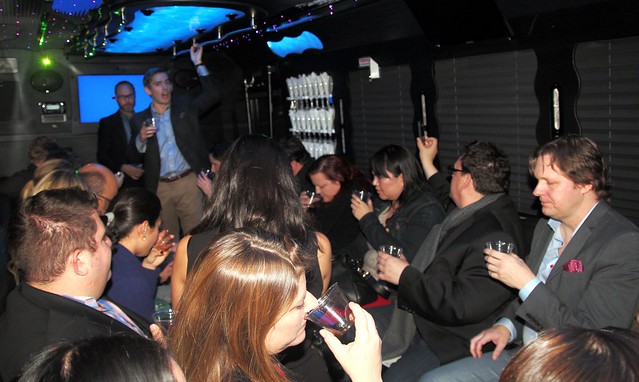 Sniffing the 22 Year on the party bus.

We started the evening off at the only Macallan-focused bar in America,  10 Pound at the Montage Beverly Hills, where we were introduced to McKidd and brand ambassador Charlie Whitfield who toasted us with the Skyline Macallan. It’s the youngest of the single casks so the oak here is subtle.

After the toast, a dram of Macallan 12 and several strips of 10 Pound’s infamous bacon snacks, we hopped on a party bus to Bar Marmont in West Hollywood. On the way over, Charlie passed out tastes of a new 22-year-old that was aged solely in American Oak, the first time Macallan has ever done that. It’ll be part of a new “Flask” release, in a flask designed by Oakley. The scotch tasted rich, warm and like baked goods, cream soda and vanilla. Nom! I snuck two tastes when no one was looking.

At Bar Marmont, we were lead into the lounge area to the right of the bar. But since our group exceeded the seats in the lounge we spilled out into the bar area where we sipped on double pours of Macallan 15 and noshed on French fries. 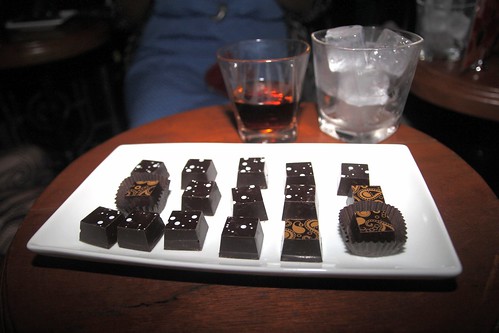 Then it was back on the bus to Roger Room, which turned out to be the highlight of the evening because I finally had ingested enough liquid courage to sit down and chat up McKidd, who was wayy easier to talk to than I thought. He had none of the I’m-so-pleased-with-myself smugness that I figured a TV star would. In fact he was very down to earth and even blushed when I said he was a good-looking man. Yes, I said it. Apparently he was surprised that he got the call to model for Macallan and knew he couldn’t turn it down especially because Annie Leibovitz was doing the shooting. By the way, that’s my new bucket list item: portrait by Leibovitz.

Anyway, at the end of the night after finishing off with Macallan 18 and its matching Compartes chocolates, Cool Hunting‘s Julie Wolfson, Savory Hunter‘s Aaron Tell and I promised Kevin that we’d take him out to our favorite bars downtown. Whether or not that will actually ever happen doesn’t matter. It was just fun to even make the plans. “We’ll start off at The Varnish and then go to The Parish and end at Cana!”

At the end of the night, Macallan packed each of us off into a chauffeured car to take us safely home. Now, that’s how you do a bar hop.