Day drinking takes restraint, especially when the rest of your day involves doing something other than taking naps. But for someone like me who loves full-bodied cocktails that are stirred, it’s difficult to find satisfaction in most daytime cocktails. Meh-mosas. Fortunately when someone like bartender Dave Kupchinsky of Eveleigh is making the cocktails, there’s a good chance that not only will it take more than a few to render me useless for the rest of the day but that they’ll satisfy my taste for a well-crafted cocktail. Dave, a big fan of drinking Americanos all day on Sundays, created low alcohol drinks here, lots of ice and light on the booze.

The brunch cocktail menu debuted early this fall but Dave said he’ll only add a couple of new ones to it soon. Here’s what’s available now.

The Cynar Julep (above) is perfect for those who have been intimidated by the uber-bitter artichoke liqueur. I mean, back in the day I used to hate the stuff. So bitter, it made my palate crawl up into the fetal position. But here, all done up as a julep on ice with the cane sugar and grapefruit it actually comes across like a pleasant iced coffee. 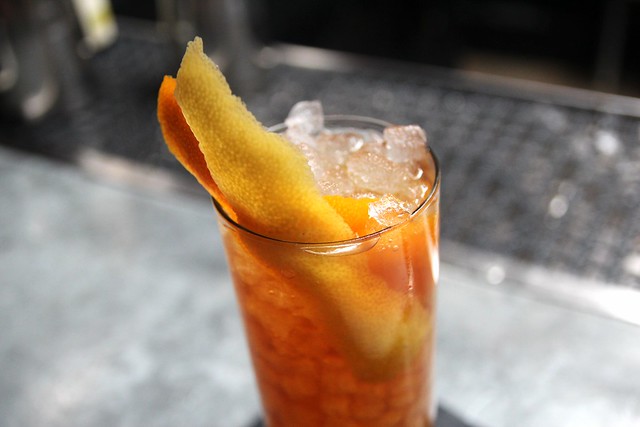 Iced Sherry Tea: Dave’s goal with the menu was to create an alcohol version of popular iced drinks. This iced tea with sherry is super light with a hint of that Earl Grey perfume thanks to the tea infused amontillado sherry. I have to rein in my instinct to suck this baby down in two gulps though. 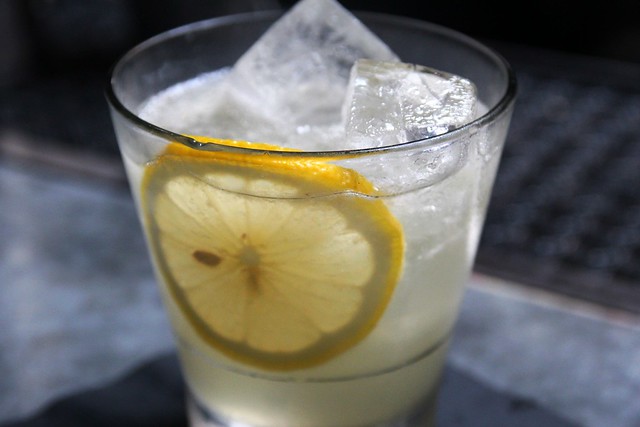 The Eveleigh Lemonade is the most popular cocktail off the drink menu. It started off on the regular cocktail menu but Dave felt it would do well as a day drink, too. It’s not super alcohol-y which makes it really quaffable. My drinking partner at the hosted tasting, Aaron of Savory Hunter, thought it was tart but I disagree, which says a lot because I am no fan of tart drinks. I think the chamomile helps soften things here. 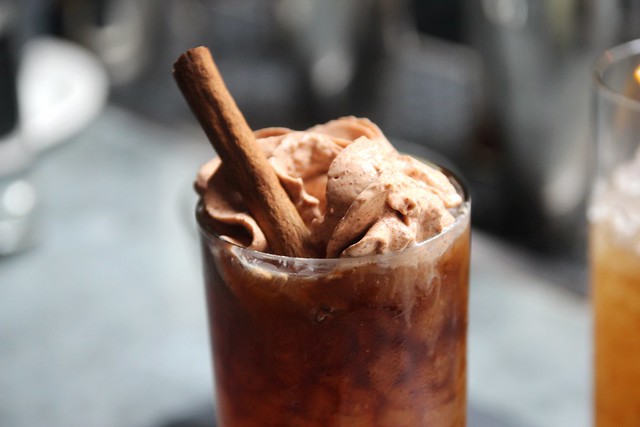 The Mexican Iced Coffee was my hands-down favorite of the bunch, well, its hot version was. But the iced one was good, too. The pinch of cayenne in the coffee itself worked well with the bitterness of the coffee. If it’s a cold and rainy day, though, I highly recommend asking for the Mexican Iced Coffee to be done up as a hot cocktail. So much better, more intense and cozy-fying and, oh, the spicy whipped cream on top gets all nice and melty. 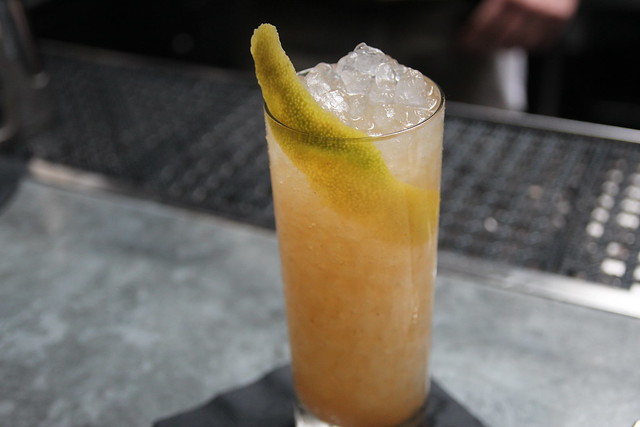 Not surprisingly the Pear Bellini is for those who want something really, really light. Its only booze is sparkling wine, which comes through brightly while the pear hangs back a bit with the cardamom. Definitely not as in your face as, say, a peach bellini where all you can taste is the peach. There’s a nighttime version of this cocktail called Nice Pear but it just tastes like water to me. Wayy too light for the evening. 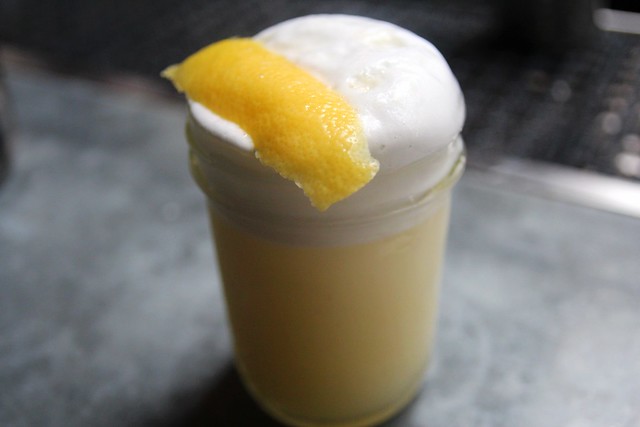 The name of the Fergnully Fizz was inspired by Cana Rum bar manager Allan Katz who has nicknamed The Eveleigh “Ferngully” for its Aussie owners. Dave takes his time making the beautifully stiff meringue that crowns the cocktail, adding a little soda water a bit at a time. So don’t you dare drink this with a straw. Get your lips in there, relish the fizz mustache. 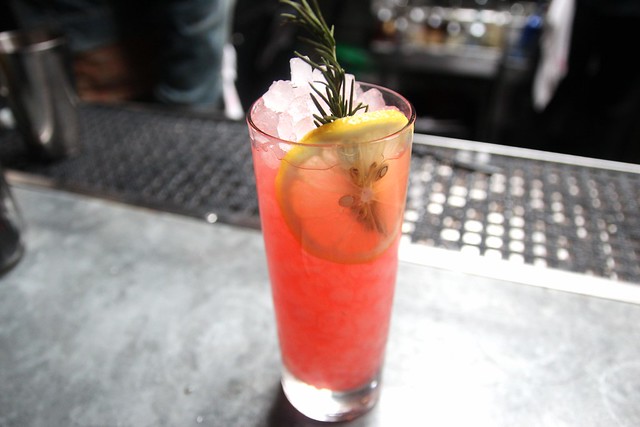 Dave admits that Rosemary’s Baby “isn’t mind-blowing mixology.” It’s simple. “If I could do a cocktail with just four ingredients, I’m happy,” he said, wanting to create the same sort of beautiful simplicity as a Negroni. And he pulls it off here. Just four ingredients that leave their impression. You experience this drink in layers. It starts with the rosemary which blends into the Campari and finishes with the grapefruit. Think the everlasting gobstopper of cocktails. 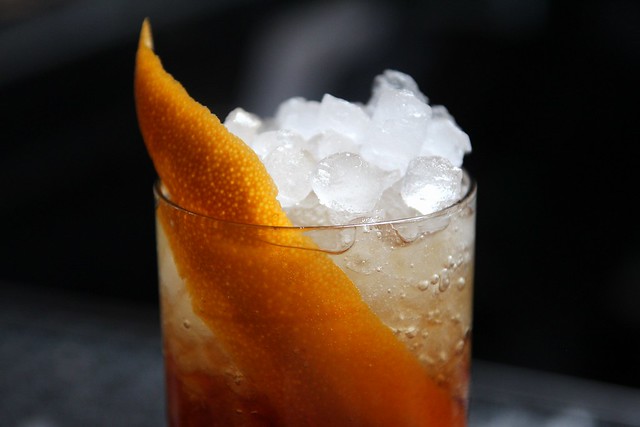 Paint It Black: I love how Dave turned a strawberry cocktail into something so dark and bitter. And the flavors, like in Rosemary’s Baby, reveal themselves to you slowly. The Fernet is realized with the subtle vinegar of the shrub while the Carpano offers up that hint of vanilla, surprisingly not dominating as the sweet vermouth is wont to do. Such a well-balanced cocktail.

Needless to say, after taking a few gulps of each of these, all I wanted to do was go home and take a nap. So if you want to still be able to function after brunch, I’d say stick with the Iced Sherry Tea and the Pear Bellini. All else, you gotta try that Mexican Coffee (hot) and the Paint It Black. Deelish!

Brunch is on Saturdays and Sundays from 10am to 3pm.