Everything I Drank This Week: From a Secret Bourbon Milk Punch to Mint Chocolate Stout

Truth be told, I feel like crap when I don’t blog. But this week has been a busy one of boozy events like Neat’s one-year anniversary, following Simon Ford around at his guest bartending stints and covering Stone Brewing’s store opening in Pasadena. Suffice it to say that many drinks were consumed and zero blog posts written. Blah.

Fortunately this actually provided fodder for this roundup of (most of) everything I drank this week, minus every single dram I had at WhiskyLive on Wednesday because that would just be too crazy. However, look for a future post about that whisky-fueled insanity.

At Neat’s one-year anniversary, a gang of guest bartenders like Mia Sarazen (The Churchill), John Lermayer (Champagne Krug) and Simon Ford (again) took over the bar and served the thirsty masses their special Sailor Jerry cocktails. But I stuck with Erick Castro’s punches, including his Little Monsters Exotic Punch which I assume was named for Lady Gaga. A fun drink to guzzle with its Sailor Jerry, Dry Sack Oloroso, sherry 12 year, Elizabeth allspice dram, simple syrup, soda. But my fave of the night, which I’m sad I didn’t take a photo of, was Neat bartender Cari Hah’s Bourbon Milk Punch. It was off the menu and placed in my hand when no one was looking. Made with Old Fitzgerald, House Spirits Distillery coffee liqueur and pumpkin pie spices, it was just the thing for a sultry fall day in L.A.

Simon Ford and Dushan Zaric did yet another launch of spirits company, The 86 Company, at Harvard & Stone where they did tastings of the products as well as a special cocktail menu. Since Corner Door popped up on the back patio, I grabbed some food and ordered a Filament cocktail (gin, lemon and grapefruit, maraschino, bitters) at the front bar to prep for the night of drinking that would follow at the R&D bar in the back. Once in front of Simon, I was blessed with one of his Mum’s Apple Pie cocktails which turned out to be the most popular drink of the night. With its mix of Cana Brava 3 year rum, apple cider, lemon, Demerara and cinnamon. Amazingly it tasted like an actual apple pie without any of the cloying sweetness you’d assume such a cocktail to have.

Another day, another spirits launch. This one was Heaven Hill Distillery celebrating its new Larceny Bourbon with straight razor shaves, live music and of course a special cocktail menu at Seven Grand. I tried the bourbon on the rocks, an Old Fashioned and a buck but my fave of the evening, shhh, didn’t have any Larceny in it. Not that the bourbon is bad. Cari Hah is just an effective pusher. She got me to try the** _iced Irish coffee_**. Apparently she had a hand in its creation. “Seven Grand needs an iced one,” she said, and I agree. But the thing that makes this one so special is that it doesn’t have any water in it AND it is crowned with a vanilla vodka foam. Deliciousness! 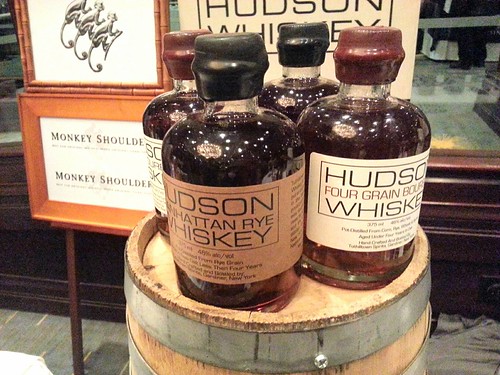 Whiskey tasting event WhiskyLive opened my eyes to many new favorite whiskies plus allowed me to satisfy my curiosity about this new trend of bottled barrel-aged cocktails. But I was excited to finally get my lips around the Hudson Manhattan Rye, a rye especially made for a Manhattan cocktail. It has lived on my personal wishlist for both birthdays and Christmas for five years but no one has ever gotten it for me. Wah. And it’s a pretty penny to buy for myself. So Wednesday was the first time I was able to taste it. Spicy and fruity I could only imagine how well this would work with sweet vermouth.

Oh my what a day of drinking. This has to be broken into parts.

Stone Brewing Company Store: I kicked off the afternoon at the opening of Stone Brewing’s new Pasadena store where, although there were 20 taps, I only had sips of Stone’s Mixtape Ale which is comprised of Stone Levitation IPA, Smoked Porter, Sublimely Self-Righteous Ale, 2011 Imperial Russian Stout and Belgo Anise Imperial Russian Stout. And naturally had to follow that up with the surprisingly hoppy Mint Chocolate Imperial Stout. A limited edition collaborative brew by award-winning home brewer Ken Schmidt, Iron Fist brewery and Stone, it was released the beginning of October and is available in bottles as well as at certain bars on tap. But at the store, they had nary a bottle in their fridge. Stone CEO Greg Koch guessed that they sold out. So if you happen to see it in a store, get it. 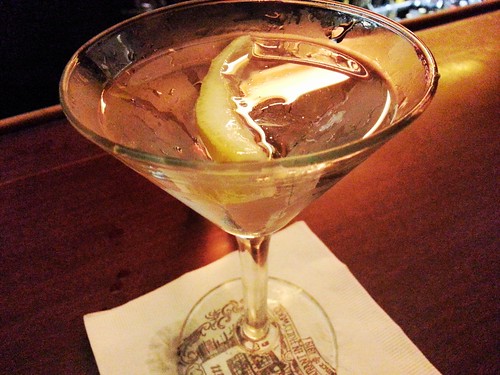 The Parish: To balance out last week’s epic drinking at The Parish as well as keep in theme with the beer I had at Stone, I ordered up the Black Bee beer cocktail from bartender John Coltharp. Oddly enough I wasn’t feeling this mixture of bourbon, stout, honey and lemon. Very citrusy, coming across as acidic. But my drinking companions loved it, finishing it up for me.

Musso & Frank’s: Of course I had to have a gin martini but instead of having it with olives, I went for a twist with my Beefeater. I want to end all my days here.

Sadie: OK, at this point I was easing back but managed to sip on a beautiful grapefruit cocktail by Simon Ford. Made with Aperol, grapefruit, Ford’s Gin, grapefruit bitters and lemon, it was bitter and made me salivate (compelling me to order some mac & cheese). Would have been perfect for day drinking.

Now will this effectively prepare me for several days of Portland Cocktail Week this week? Stay tuned.