If you weren’t out at Sadie in Hollywood last night for the guest bartending stint of Giuseppe Gonzalez, co-owner of tiki destination PKNY (Painkiller New York), you missed out on some goood drinking. Sadie Director of Spirits Giovanni Martinez stood back and let the New York bartender have at his barware in the front bar. This night Giuseppe stuck to 10 of his signature PKNY cocktails. Unfortunately I was only able to try four. I know, lame. But here they are along with some of Giuseppe’s notes to get you in the mood for Friday night drinking.

First off, the above Spiced Colada. One can’t have Giuseppe Gonzalez behind the bar and NOT ask him for a tiki drink. Actually, “something with coconut” was all I said and he came back with this one. Its name says it all. Creamy, spicy, coconut-y, delicious.

Giuseppe said when he had created the Trinidad Sour cocktail it was during the Great Angostura Depression of 2009 and he wasn’t allowed to put it on the bar menu because after they priced it out they would have had to charge guests $27 for the one cocktail which uses Angostura as a base with 1 1/2 ounces. But now since all is right with Angostura, Giuseppe said he’s going to put it on the menu for his other bar, Golden Cadillac on the Eastside in New York.

Giuseppe says of the Trinidad Sour: “My most popular cocktail. It’s the drink that people always ask me about. You either love it or you hate it. I consider it a lot like myself: bitter, sweet, strong and you either love it or hate it. I have a personal attachment to this one because it was the drink nobody would ever let me put on their menu… Ever. Many said it would not work and nobody would ever drink it. Idiots. It taught me to not listen to anyone and just go with your own taste and style. Fuck what people think. Angostura Bitters, lime, orgeat, rye.” 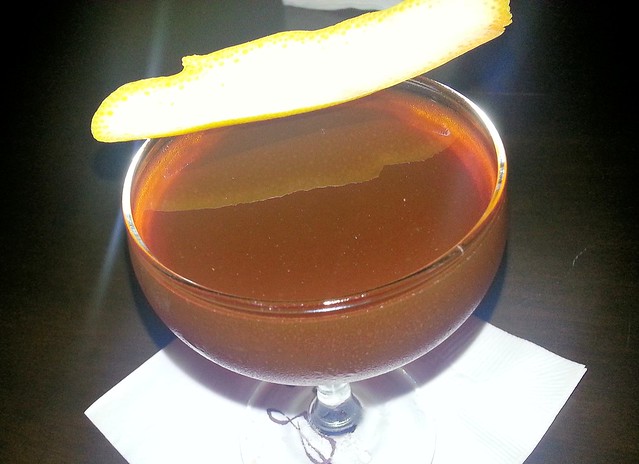 Bitter Giuseppe, the drink, not the bartender. Grapefruit, salt, vermouth and Cynar.

The Bitter Giuseppe, surprisingly enough, wasn’t named after Giuseppe. But it certainly is bitter. And yet it’s almost like coffee bitter with that silky texture of strong instant coffee. A sipper for sure.

Giuseppe says of it: “Not my drink. People think it is. It is not. Someone from the Violet Hour came up with this one and my only complaint is that I did not think of it first. Grapefruit, Salt, Vermouth and Cynar. I once drank 15 of these in one sitting. Not bragging. Just making a statement on how good these can be. I won’t go into what effects the body endures from consuming artichokes for a few hours. An interesting morning to say the least though.”

The Grapefruit Collins was the last of the drinks I had last night. I suspect Giuseppe figured I already had one too many and was trying to slow things down for me. (I did have a designated driver of course.) But this one was so very light and refreshing, especially after the heavy, aromatic ones before it. And I blame the Bitter Giuseppe for the fact that I really couldn’t taste the grapefruit here, only as one subtle note. I’d love to have this in my hand during a hot and sticky New York night.

On a very special Sadie guest bartending night next Thursday: Bon vivant Simon Ford and Dushan Zaric, owner of Employees Only in NYC. The two created Ford’s Gin for The 86 Company, a premium spirits company. Suffice it to say, kickass cocktails are guaranteed.