Sprinkles Cupcakes founder Candace Nelson must have one monster sweet tooth. She didn’t just stop at kickstarting the whole cupcake trend, she followed that up with a cupcake ATM AND the Sprinkles Ice Cream shop next door to her first store location in Beverly Hills. Even though the red velvet ice cream with red velvet cupcake top or red velvet waffle cone is the most popular combination at the new shop, Candace has her own favorite. 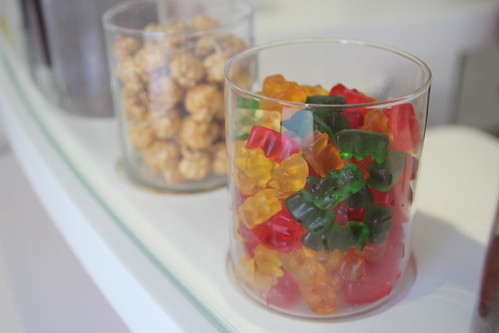 So many toppings, so little room in the tummy.

“My favorite way to experience Sprinkles Ice Cream is actually a sundae since our sauces are so amazing. So a sundae I made the other day which I thought was quite spectacular…triple chocolate because I’m a chocoholic and coffee almond fudge which is great. It’s got that crunch to it and made with LAMILL coffee, then hot fudge and then caramel and we have freshly whipped cream and topped with caramel corn and salted peanuts.” Yes, it sounds crazy, over the top but Candace swears by it.

“The different textures, the different temperatures going on and everything together, it’s like that whole spectrum of flavors…the hot fudge isn’t super sweet, it’s very chocolate-y and then the nuts are salty, the caramel corn is a little bit sweet. But it wasn’t too sweet and especially with that saltiness in there, it all turns out OK.”

Sprinkles Ice Cream joined the trifecta of treat stops on Little Santa Monica Boulevard back in May. Why did Candace and her husband Charles decide to go the ice cream route? They were always in love with old fashioned ice cream shops and wanted to bring them back. “For so long it’s been about frozen yogurt and gelato, so we thought, kind of what we wanted to do with cupcakes, let’s bring back that quintessential American thing and make it new again. I feel like the old fashioned ice cream shops disappeared. Where were they?” she said.

Fortunately, like the cupcake stores and cupcake ATMs, there will be more ice cream shops. The next Sprinkles Ice Cream shop is slated to open in Newport Beach early next year.

After practically living at Scoops Westside, I have to say the ice cream at Sprinkles Ice Cream isn’t as flavorful as Tai Kim’s. Not that that’s bad. You certainly won’t find flavors like white chocolate coconut wasabi here. But it IS creamier. And you gotta love the myriad of ways you can enjoy your scoops: sundae, sandwich, shake, malt, float. Keep in mind, though, that with toppings and sauces priced at $1 a pop it’s way too easy for things to get out of hand. Candace’s creation above would cost about $9.75 ($7.75 double scoop sundae with three sauces/toppings included + $2 extra toppings).

Personally I discovered my own favorite at the store: salty caramel ice cream with the banana cupcake which is only available on Mondays, Thursdays and Saturdays. Bananas Foster, baby! Now if only there was some brown sugar rum sauce to throw over it. But, as is, it’s not too sweet which makes it perfect for nearly guilt-less late-night cravings. Either enjoy it in a cup to go or as an ice cream sandwich. Surprisingly the cupcake tops do a great job of containing the ice cream. I was worried that as the ice cream melted it would soak into the cupcake and render it a huge mess. But turns out, you’ll finish it off before it even gets to that point.