So how does 213 Nightlife‘s brand-new Seven Grand San Diego whiskey bar, which just celebrated its grand opening last Thursday, differ from its L.A. sister? 1) It’s got double the beer taps (25 versus 12 in L.A.), which makes sense considering San Diego is America’s beer capital. 2) It also boasts a Jackalope-esque Room with a second bar as well as a dedicated stage for showcasing live performances by bluegrass and blues bands.

But more importantly, 3) NO STAIRS to fall down. If you’ve been to Downtown L.A.’s 7G then you know what I’m talking about. That darken tartan-covered staircase connecting the second floor bar to the first floor exit is a tricky proposition for anyone after a night of drinking. Raise your hand if you’ve taken a tumble there. 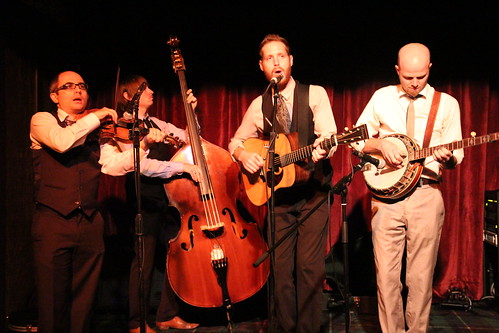 Bluegrass band The Get Down Boys take the stage.

However at this 4,100-square-foot 7G, located in San Diego’s North Park (about 5 miles northeast of the Gaslamp Quarter), instead of stairs, you actually just walk in through the front door and are greeted by two options: go left for a game of pool or right for some serious drinking. Choose wisely and you can either select from the menu of five $10 whiskey classics like a Rye Manhattan or Kentucky Mint Julep, beer from San Diego’s finest like Stone and Ballast Point, or simply cut to the chase by ordering off the crazy-huge whiskey list.

For the grand opening party last Thursday, guests were treated to four hosted cocktails: a Boulevardier made with Death’s Door White Dog Whiskey, a tiki Indies Trader with Don Q Rum, Wild Turkey Buck with 81 proof Wild Turkey bourbon and an East Side with…sorry, at this point I blanked out. Didn’t help that I followed this up with a Sazerac.

All the drinks were well made despite the bartenders having to do a quick turnaround for the thirsty private party crowd. Watching them stir three drinks at the same time was a thing of beauty.

Once the doors opened to the public at 8pm, the front bar quickly filled up to three-deep while the back bar was still sort of manageable. That second back bar is going to come in handy, unless of course there’s a band playing, that is. 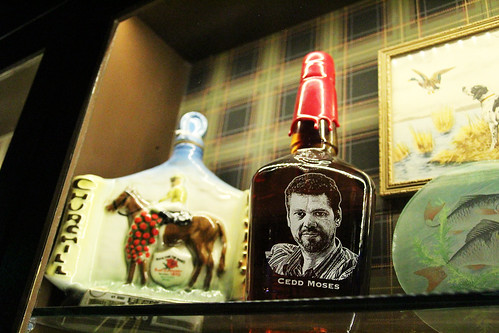 Your face on a Maker’s bottle? Must be nice.

So yeah, the Seven Grand theme was so faithfully reproduced here that I almost felt like I was back in L.A. There’s the wall of Maker’s Mark bottles, the display of whiskey artifacts (including a Cedd Moses Maker’s bottle), the familiar jackalope and deer heads quietly looking over the scene and the gorgeous wall of quality booze behind the bar.

Visiting Angelenos won’t feel homesick, unless, that is, you walk out the door thinking you’ll just saunter over to the Varnish for a nightcap. Here, you can opt for staying in the area and hitting up nearby pubs, wine bars or dive bars like Red Fox Steakhouse and Piano Bar. Or if you want to keep riding that craft cocktail wave, catch a cab and head to the Gaslamp Quarter to visit Sam Ross-schooled bartender Anthony Schmidt at Noble Experiment in Neighborhood gastropub (tell him I sent ya!), the Audrey Saunders-trained Erin Williams at Hotel Palomar’s Saltbox bar/restaurant and Craft & Commerce, sister to Neighborhood.

Did I mention that a roundtrip Amtrak ticket to San Diego costs $90 ($81 if you’re an AAA member)? Keep in mind that if you are suffering from a hangover the day of your return trip, best to sit as close to the bathroom as possible on the train, and the store in the Santa Fe Depot sells coconut water as well as plain bagels and big bottles of water. Just sayin’.

But if you’re wishing for another 7G in L.A., not to worry as there is that one slated for the United and Continental terminal at LAX.

For more photos of the entire hosted Seven Grand Whiskey on Rails trip, including a whiskey tasting on a train, click here.