Does Jones Hollywood Have the Best Apple Pie in LA?

What’s your favorite place for apple pie in L.A.? Wherever it is, I bet it’s some diner, bakery, hot new restaurant or coffee shop and definitely not a bar. But after tasting the infamous apple pie at Jones Hollywood on Santa Monica Boulevard (not Joan’s on Third), your mind will be blown. Now, Jones, a bar/restaurant by Sean MacPherson (Il Covo, The Pikey, Roger Room), has been around for YEARS, since 1994! It’s clearly not the “hot, new thang,” it’s a stalwart stand-by, catty corner to that other stalwart stand-by, Formosa Cafe.

Last time I stopped by Jones Hollywood I was still nursing White Russians, my first favorite cocktail. It wasn’t until this year when I ran into Jones bartender/Dirty Sue owner Eric “ET” Tecosky in New Orleans at Tales of the Cocktail that I was convinced to give the bar/restaurant another go. ET didn’t entice me over with “a brand-new cocktail menu” but rather the “best apple pie in L.A.” So after Formosa one night, I stumbled across the way to Jones for that pie. 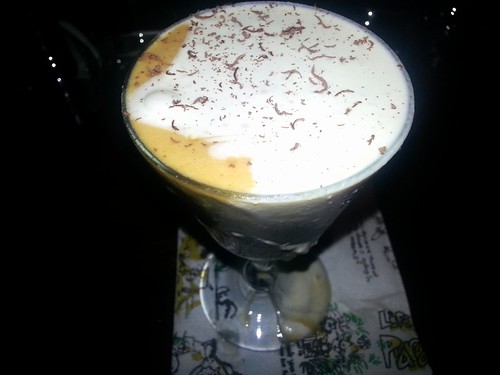 Sitting at the bar, I was presented with a cast iron skillet of steaming apple pie resting atop a wood board. “Be careful of this part,” the server said pointing at the bubbling caramel, “it’s crazy hot but you can cool off with the ice cream.”

I immediately broke off a chunk of the crust, making sure to get some of the baked apple, and then soaked it in the caramel before scooping up some of the vanilla ice cream. This bite perfectly encompassed all the elements of the pie. Oh lord.

The crust was thick and flaky with embedded crystals of sugar, sort of like a graham cracker. The baked apple wasn’t mushy or too firm and was well-spiced. But for me it was all about getting the crust, caramel and ice cream together.

Seeing as how I’m not Evan Kleiman, I can only say this is my favorite apple pie in L.A. Don’t know if it’s the best, but I wager it’s up there. You tell me what you think.

And, when you go to check it out, make sure to ask Eric for his off-the-menu Erin Rose iced coffee cocktail which was inspired by the Frozen Irish Coffee we had at Erin Rose in N’Awlins, one of my favorite drinks there.

Eric’s crafted version may not have been made on a machine but it was still creamy and gorgeous and worlds better than its namesake. Eric put it together by dry shaking the heavy cream, sugar and Baileys and for the coffee he mixes espresso, sugar and Jameson. Instead of coffee grounds, he grates chocolate over the top. This with the apple pie makes for a dangerously decadent late-night snack.