Bartenders’ boogie at Sunday’s Art Beyond the Glass.

Last Sunday’s charity event Art Beyond the Glass at Sadie Kitchen & Lounge is already going down in the LA cocktail community as the best party EVER. Not only did bartenders, liquor reps and cocktail geeks get to raise a bunch of money ($3,900 presales, final tally to come) for the Inner-City Arts organization but they had a blast doing so. The dancing was nonstop. Nonstop!

And what made Art Beyond the Glass stand out from most boozy events, apart from its strong sense of camaraderie among its attendees, was that it didn’t display any of the typical clusterfucks or speed bumps one would expect at an inaugural boozy event. No long lines, no grouchy (read: sober) people, no shortage of food. 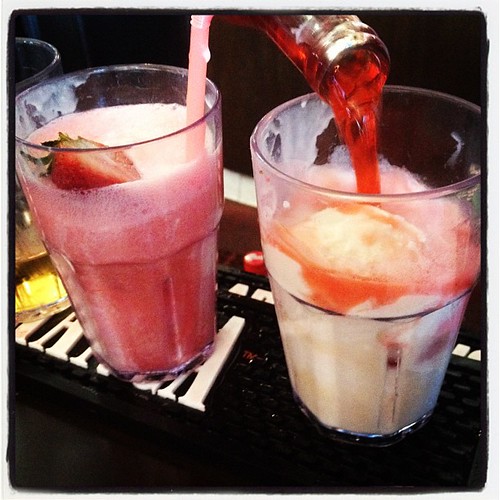 All smiley, happy faces as old friends greeted each other with squeals and hugs and new friends got to know each other on the dance floors. Bar bites created by Chef Mark Gold of Sadie were regularly passed around the restaurant. The Sadie staff and the ABTG event organizers (Zahra Bates of Providence and Daniel Djang of Thirsty in LA) kept things running smoothly.

The Hollywood restaurant’s 7,300-foot-space was the perfect venue for an event showcasing the multiple talents of bartenders. A raucous dance club commandeered the front bar thanks to mixmaster mixologists and the back patio showcased the performances of talented bartenders who dj’d, sang, performed a magic show, live graffiti’d and more. Meanwhile, all the best LA bartenders took up shifts mixing cocktails for the masses. It wasn’t crazy packed which was fine by me.

Personally I had the best time evuh! But I wondered if this was helped by the fact that I knew most of the folks at the party. Was curious to see if other attendees had a blast, too, especially those new to the cocktail community. Did you have fun at Art Beyond the Glass?

Here are some highlights of the event, at least for me: