What Formosa Cafe Regulars Drink: Before & After the Remodel 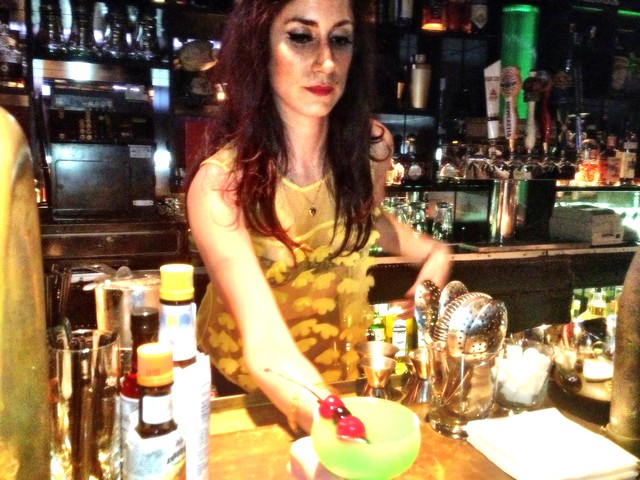 New Formosa Cafe bar manager Kate Grutman, formerly of Sotto, wants the regulars at the Hollywood landmark to know that she’s not the devil. She took over the cocktail program there much to the chagrin of the folks who have been patronizing the bar for years, some even decades. “If I even see a jigger, I’m walking out the door and never coming back,” Billy Ray, one of the regulars and a bartender at Blind Barber no less, told her.

Formosa Cafe, which started out as a lunch counter Trolley Car in 1925, has long faded from the spotlight since its days as THE eatery to the stars. 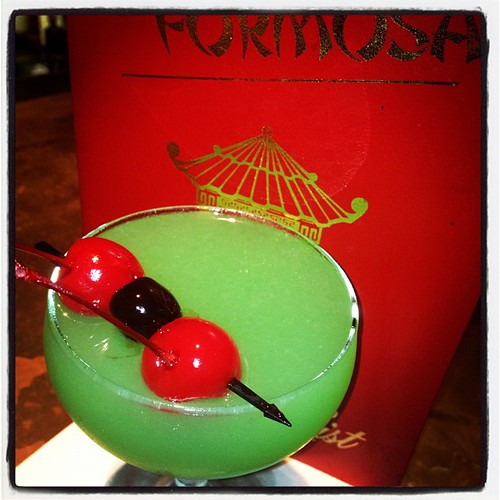 Thanks to its close proximity to the movie studio — formerly Pickford-Fairbanks Studio and now The Lot — this is where John Wayne fried up an egg while in his boxers after spending a night in one of the booths, where Frank Sinatra drank into the wee small hours of the morning while pining over Ava Gardner and where, in the movie L.A. Confidential, Lana Turner was mistaken for a prostitute.

It’s got a lot of history. And when dealing with a historical landmark, changes have to be done carefully and respectfully, right down to the drinks. (See: Tom Bergin’s Tavern)

New Cocktails With a Lot of History

So Kate, a native Angeleno whose grandfather used to be a regular at Formosa Cafe, researched the restaurant’s old menus and customer logs to try and figure out what past clientele, particularly the stars, drank. The result is a cocktail menu with classics as well as classic-inspired creations, named after movie stars, movies, family members and even regulars.

There’s The Seven Year Itch, an ode to Marilyn Monroe’s potato chips and champagne scene in the movie of the same name. The side of homemade chips goes nicely with the cocktail of bubbles, Cynar, sugar, cherry liqueur, lemon. Dip the sturdy chip in the cocktail for a pairing in the style of Marilyn.

The Phyllis cocktail, a take on a Zombie, is named after a nervous Nelly of a regular who favors horror films and Chardonnay. 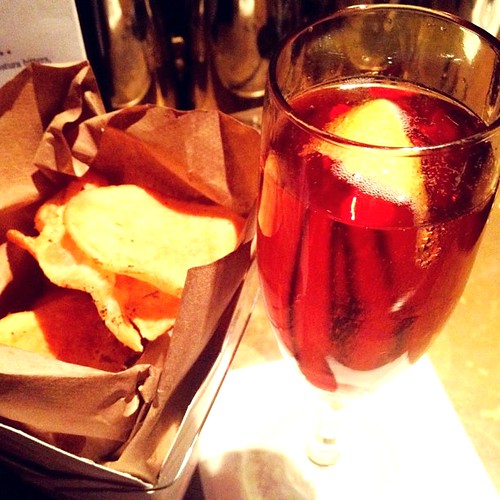 And of course there has to be a signature cocktail, which here is the Formosa Sour, basically a Midori Sour made from scratch. Kate made her own Midori liqueur out of French honeydew, sugar, orange flower water and canned lychees with some green food coloring.

And not to worry, even though the quality of booze has drastically improved — bye bye, dusty DeKuyper bottles — the prices aren’t crazy expensive, ranging from $9 to $13.

What the Regulars Drink

The new Formosa Cafe cocktails launched just this weekend but Kate shared how she changed some of the minds and drinks of the former dive bar’s denizens, from drastic changes of cocktails to little switches for better spirits in their usuals (indicated below in italics).

Phyllis (a 75-year-old retired graveyard shift dispatcher for CHP): Glass of Chardonnay, a Mai Tai and truffle mac and cheese. “Phyllis is just waiting for [her namesake cocktail] to come out…I’m going to put plastic ice cubes that blink in the drink. I just want to make it nice for her.”

Senya (transvestite prostitute who works the corner in front of Jones and is always dressed to the nines): Raspberry margarita and shots. “But now she wants to try other stuff, like, ‘Can you make me a margarita and could you use your other not-sugary stuff?’ I just make her a lime, agave, a little Combier, tequila. She likes it and then she’ll say, ‘Let’s do a shot of Ocho.’ Now she loves Ocho!”

Larry Drake (actor): Bombay Sapphire and tonic. “We keep Bombay here just for him. No one else orders it.” But Kate convinced him to try a Martinez with a different gin. “And he loved it!”

Neil (34-year-old entrepreneur from Canada): Crown, soda and bitters.”I wanted to appease him so I told him, ‘I ordered some Canadians for you.’ And I got Pendleton and Canadian Club. And at first he was like, ‘I don’t know.’ And now I have to order Pendletons for him. So now he gets that every night with bitters and soda.”

Even though Formosa Cafe boasts a brand-new cocktail program to go with its refurbished interior (the smelly carpet is gone!) and new food menu, Kate, who will be at the bar six nights a week, wants it to be known that she will make whatever the crowd wants to drink. She’s not a snob. However, you can’t fault a girl for trying to expand people’s horizons. “We sell a lot of Maker’s Mark here. But we ran out of that and Jack for a week because we were trying to transition them. But we had Dickel and you can imagine trying to sell Dickel. That name! But they loved it. That always happens. They were like, ‘This is gooood.’ But if you love Jack, have Jack. I don’t care,” she smiled. “People are coming around.”