Cocktailing has just gotten even fancier. Yup, dust off your monocle, it’s now right up there with schmancy wine drinking.

I kid, but in what appears to be a really slow-growing trend in L.A., Melisse restaurant in Santa Monica can now count itself among the ranks of Michelin two-star restaurants in the city with an exceptional cocktail program that makes cocktail geeks swoon. OK, we really only had one, Providence, courtesy of mixologists Vincenzo Marianella (who is now at Copa d’Oro) and Zahra Bates. But now Melisse, too, can boast a notable cocktail list thanks to dynamic duo Steve Livigni and Pablo Moix (La Descarga, Harvard & Stone, Pour Vous). Yes, the guys who make you dress up to drink. Come on, you like it. 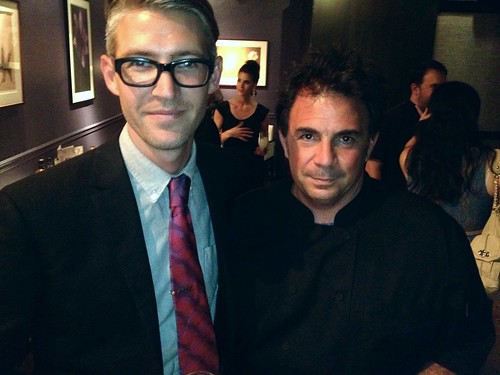 Melisse still doesn’t have a bar or designated drinking area, but Steve and Pablo worked with chef/owner Josiah Citrin and sommelier Brian Kalliel to create a cocktail menu of 42 aperitifs, specialty cocktails and classics ($18 each) from which guests can order to complement their 10-course dinners.

Why the move from just a wine and champagne list to cocktails? Especially when there are still plenty of high-end restaurants who put more thought in hiring a sommelier than a mixologist?

Chef Citrin wants his guests to experience only the best, even right down to the coffee. “I don’t want to walk up the street to Luxe Cafe and then have a better coffee than here. I gotta be sure even with coffee we have everything be the highest quality.” So, with the recommendation of his somm Brian, he hired the guys. “I thought what they did for cocktails is some of the best I’ve had around town.”

The mixmasters actually had set their sights on doing more elaborate cocktails and more fine dining in general before they were even approached. And judging by their recent venture, Pour Vous with its French distillate-focused cocktail menu and offering of fine oysters, cheese and chocolate, Melisse is a step in the right direction. 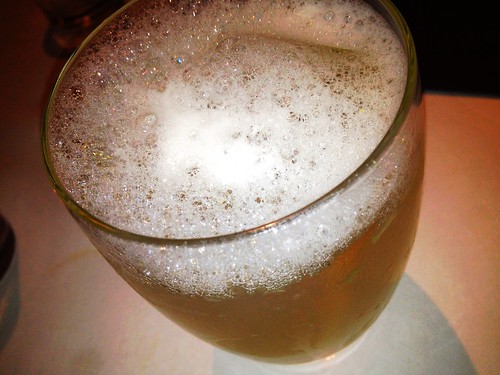 Steve and Pablo have plenty of experience catering to affluent drinkers, what with the likes of STK and The Doheny on their resumes. But creating a cocktail menu for a high-end restaurant of high-falutin’ diners with discerning palates presented a new challenge. “The expectations are very high when you sit down at a table and the food is $150,” said Steve. “The bar is raised to make drinks that are close to what Josiah does in the kitchen.”

Since there’s an array of international flavors, they made sure there were a lot of aperitifs, which is common in Europe, said Steve. “Lots of vermouths or spirits that are not overbearing with booze because you can’t sit through a three-hour dinner and have five cocktails. You’ll be passed out by an hour and a half.” They also took the cocktail glass and ice into consideration to present a visually appealing cocktail.

Melisse cocktails are here to stay and will be updated on a regular basis depending on what’s in season. “The classics will stay and some of the drinks will get swapped out. Whatever’s fresh will be reflected on the cocktail menu,” said Steve. Real bummer about there not being a bar. Sigh. 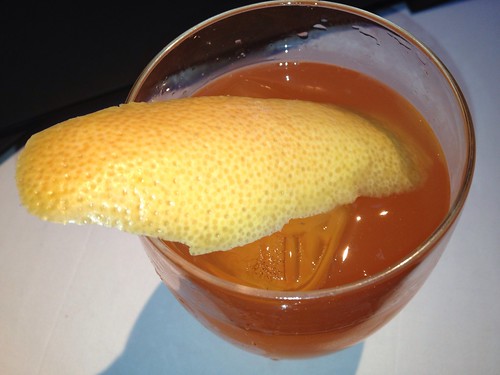 So, which cocktail does Chef Josiah like off the new menu? Despite having a penchant for straight tequila and Buffalo Trace Manhattans and an aversion to sweet cocktails, Chef counted the Mauresque — a concoction of pastis, orgeat and water — among his favorites. The water helps thin out that sugary viscosity of the ingredients making it superb.

Heads-up: Melisse currently has a Foie for All menu ($185) featuring eight foie gras dishes. Of course it’s history when the ban goes into effect July 1. But if you’re thinking of checking it out before then, Steve recommends ordering the Fessee (Sazerac rye, cognac, Benedictine, vanilla bean perfume) to go along with the first course. The sweet warmth of the vanilla bean perfume would complement the terrine and asparagus. Chef Josiah suggests the Sazerac for the last course as the cognac will go along nicely with the richness of the beef.