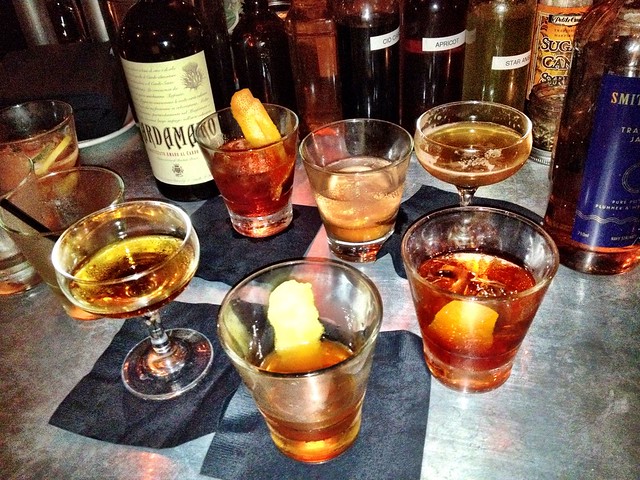 All in a day's work. Spring cocktail tasting at the Eveleigh.

You gotta love the change of seasons because with it comes new cocktail menus! Huzzah! Here are the brand-new drinks off the Eveleigh‘s spring cocktail menu, crafted by Dave “Ol Man Winter” Kupchinsky.

Dave’s thinking behind the spring cocktails was to highlight herbal, floral notes and lighter flavors and I’d say he achieved that. “Like the Improved Whiskey, I feel like that’s a lighter, brighter Old Fashioned,” he said. The Dutch Kills, which replaces the Noccino rock stirred drink that was on the menu, celebrates apricots which are now in season.

There’s something for everyone here. From the tee-totaller who just wants something sweet and refreshing, there’s the Spring Sangria. Old, bitter men who are accustomed to hard living and even harder drinking will enjoy the Waiting in Vain made with Navy strength Smith & Cross rum. Personally, my favorites were that sangria and the Improved Whiskey Cocktail.

I can’t stop drinking this. Good thing there’s a pitcher of it. Sweet with a tiny hit of bitterness making it damn refreshing. Would be best enjoyed during brunch on the Eveleigh’s patio.

Wow. Really bitter and almost medicinal in its bittersweetness. Dave explained that Navy strength rum is 115 proof to make sure if it spilled on gun powder, back in the days when sailors stored their booze with their artillery, it can still ignite. A for-serious, intense cocktail that’s best for bitter, old men. Dave envisioned it for old, hardened sailors. He said that serious drinkers will appreciate it but even I was crying “Uncle” after a sip. OK, not really, but it’s not for everyone.

Finishes a tad syrupy-sweet and bitter. Can’t taste the maltiness of the Genever. Not that it was a bad cocktail, it was just my third favorite.

Lots of bars seem to be doing Improved Whiskey cocktails which is great because this is a tasty cocktail. I really enjoyed this one, though, and count it among my favorites on the list. The absinthe here is really subtle. Not syrupy, but spirit forward. The gomme syrup (simple syrup with gum arabic) softens the edges. Dave likes to use it with high proof spirits, “You could use less of the sugar and the silkiness of the arabic just coats your tongue.”

Bitter, icy, just a touch sweet, citrusy. Totally can imagine sipping on this on a hot day waiting for my turn on the bocce ball court.