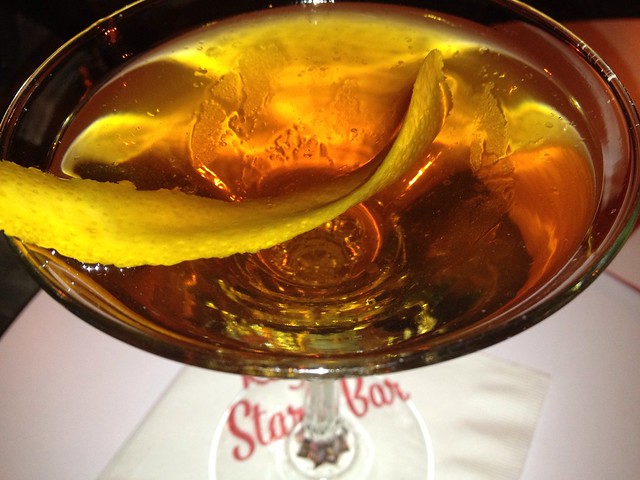 One of Stark Bar’s new spring cocktails: How I Met Your Irish Mother.

Ray’s and Stark Bar‘s mixologist/sommelier Paul Sanguinetti had envisioned a different spring cocktail menu than the one that debuted April 23rd at the LACMA bar/restaurant. At least just in the names. In his version, there were odes to debaucherous nights, Celine Dion as lubrication and friends who were banned from the museum. Fortunately for Paul, he got censored. After all would you want to drink a Vaseline Dion? Still, fun stories behind this “menu of dreams deferred,” as he now calls it.

However don’t let their original names stop you from checking out his new spring cocktails which suit the season beautifully. For the seasonal menu, Paul wanted to go al fresco style — light, bright flavors, fresh ingredients, incorporating the herb garden in the back and celebrating the bar’s lovely patio. So you’ll find fresh produce and flavors and lighter spirits.  Here’s a list of some of the new cocktails as well as their original names and some tasting notes. 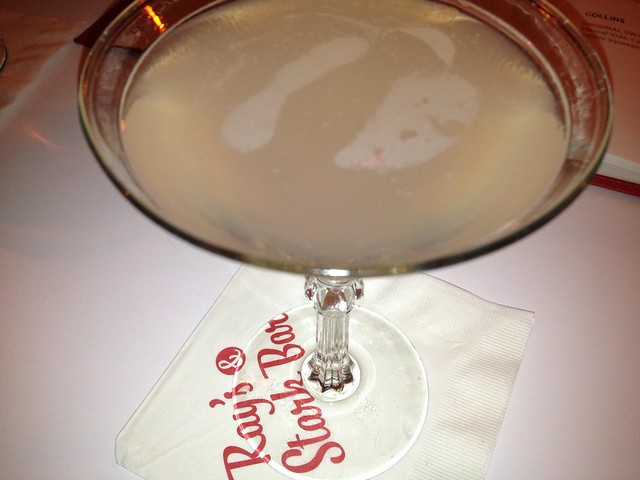 “The rosé adds complexity to a drink because wine offers a natural acidity as well as minerality from the soils so it gives a lot more structure to the cocktail and also gives it depth and complexity,” said Paul. “You don’t see too many rosé cocktails out there right now. It’s something that’s fresh and different and appeals to both wine drinkers and regular drinkers.” The cocktail is the ultimate spring libation with its mix of lavender, St. Germain and juniper from the gin. Not off-puttingly perfume-y though, but I can see it as a total girl drink, especially when decorated with the lavender, which they had run out of when I ordered it. Originally Paul wanted to call this cocktail the Vaseline Dion. No real reason why, just that it’s fun.

How I Met Your Irish Mother: Red Breast 12 year Irish whiskey, Carpano, Benedictine and orange bitters. “The Red Breast is punchier than your regular Irish whiskey. It’s got a higher malt percentage to it so less grain. Spicier than your typical Irish whiskies,” said Paul. Would be a great way to ease someone into drinking Manhattans. The cocktail was originally named Milk & Honey for the honeyed Benedictine, but Paul said that this current name works well, too, considering that he has a crush on the Jameson/Red Breast rep, apparently a beautiful Irish woman.

Dirty Harry: Famous Grouse Scotch, Mezcal Vida, Fernet Branca and orange bitters. The original name for this cocktail was “Ranch Juice,” “ranch” as in “rage” or party really hard. Paul created it for a sous chef he knew back during his Mercantile days who loved drinking scotch, mezcal and Fernet. “So I thought, what if I found a way to put all these things together and I’ll call it Ranch Juice? That makes sense because whenever I drink any of those things individually I ranch out,” he explained. Sipping on this intense cocktail reminds me of smoking menthols but surprisingly isn’t too smoky considering the combination of scotch and mezcal. It finishes with the Fernet’s minty herbaceousness. Considering its ingredients, it’s actually quite approachable and civilized leaving Paul to admit that it’s more of a Rhett Butler ranch juice than Dirty Harry. He says it’s still a work in progress, though, and is thinking of bumping up the mezcal to make it naughtier.

Lemon Balla: muddled lemon basil, muscatel and gin, like a gin smash. The inspiration for this cocktail comes from a recent wine trip Paul took to Spain. At a muscatel vineyard in Malaga, he had a lemon sorbet dessert with basil. “It was so fresh and so vibrant, and I just thought I’d like a cocktail with these flavors.” The drink is named after food writer Lesley Balla as a thank you for being so supportive of the bar/restaurant. 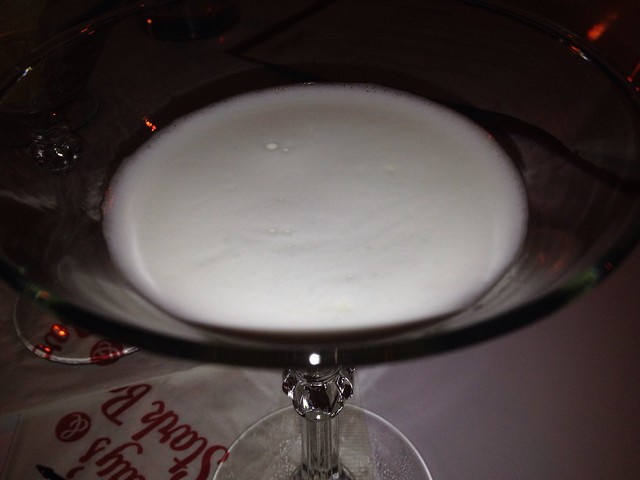 Sorry. This is just a taster of the Dragon Sour, not a half-finished drink.

This cocktail, which is named after the restaurant’s forager, explodes with fresh fruit flavors and tastes incredibly fresh. Pisco has an aromatic lift and goes really well with the kiwi which was double strained. The egg whites give it a nice texture and the mango honey rounds out the flavors. This drink will make you long for summer days.

Mike’s Tijuana Meds is a spin-off of Mike’s Medicine on the previous menu, where the tequila is replaced by armagnac. “It’s fresher so you get more pop from that lime juice. It’s almost like a tequila sour. For spring and summer, I like it even better,” said Paul.

Blacklisted (aka The Ban From LACMA): In honor of Michel Dozois of Neve Ice who had put together the original cocktail program and is a friend of Paul’s. It’s a spin on the Gold Rush cocktail with rye, blackberries, orange blossom honey, lemon. Paul believes it’s the kind of drink Michel would have created since he did use a lot of berries in his original menu.

Cubano Libre: Matusalem Classico Dominican Rum, smoked piloncillo sugar, barrel aged bitters and Mexican Coca-Cola served on the rocks. A spin on a Cuba Libre, a smoked rum and Coke. Paul makes it like a rum old fashioned. “I shave the smoked sugar, add the barrel-aged bitters to it with a little soda water to dissolve the sugar and then I add the dark rum, ice, orange peel and then I just top it off with a Mexican Coke.” The name almost got banned because it shares the same name as Che Guevara’s publication.

Miracle “8 Mile”: Bourbon, Meletti Amaro, orange peel. Was originally named “Mom’s Meletti,” a play on a line from a rap that Eminem did in the movie, 8 Mile — “palms are sweaty, Mom’s spaghetti…” It’s a simple, clean drink and makes a nice digestif, too. 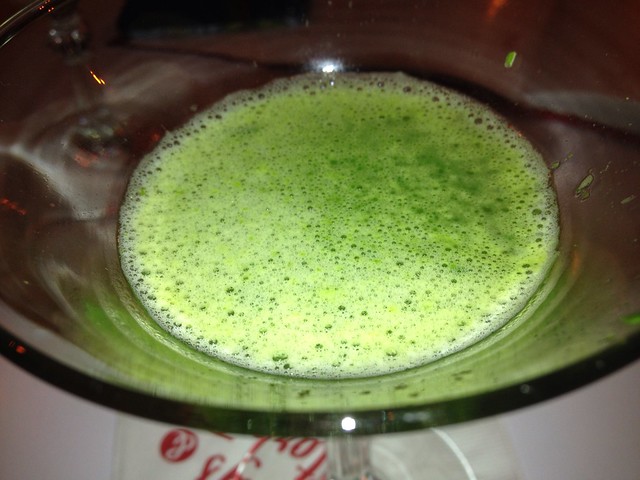 Guess why this is called the R Kelly cocktail?

Paul created this to go with a dish by Matt Shapiro that had halibut, pea tendrils and mushrooms. It’s not officially on the menu but rather on the “secret swizzle menu” and you can still ask for it. NO idea why he called it R Kelly, though. Heh. But don’t let that intimidate you from ordering this unique cocktail which tastes very fresh and healthy (See: health cocktails roundup).

By the way, Paul is also planning to do spontaneous specialty cocktails that will change week to week. Keep an eye on the bar’s Facebook page and Twitter for these.