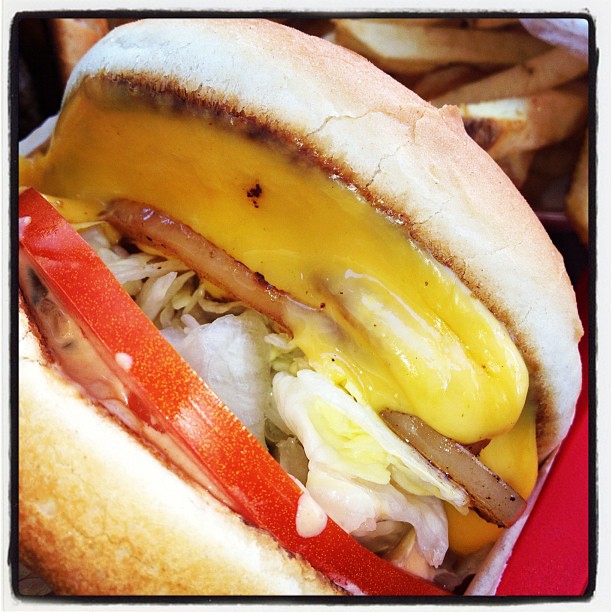 To balance out last week’s post about “healthy” cocktails, this week I give you vegetarian junk food. It’s the version of vegetarianism that newbie vegs are warned about. You know, don’t just do cheese and carbs. But when I gave up meat for “Lentish” I couldn’t help but crave these things after weeks and weeks of consuming vegetables in every form. I was sick of being good, I wanted to be bad.

So here’s a roundup of some of my favorite vegetarian junk food items around town. Keep in mind that I’m not a true vegetarian in the sense that I completely abstain from animal products. I don’t eat actual meat but neither am I diligent enough to make sure things aren’t cooked in animal fat, etc. Although in the case of the In N Out sandwich, I did.

In N Out‘s Secret Menu Grilled Cheese (With Grilled Whole Onion option) is a blessing for semi-vegetarians who want to wean themselves off In N Out. It’s available on the secret menu and you shouldn’t have an issue asking for it at any of the In N Outs. It’s the ultimate burger-free junk food nosh with its two slices of melted American cheese and that special sauce, but it’s sooo good. The whole grilled onion lends the sandwich an addictive savoriness as it’s cooked in meat juices. 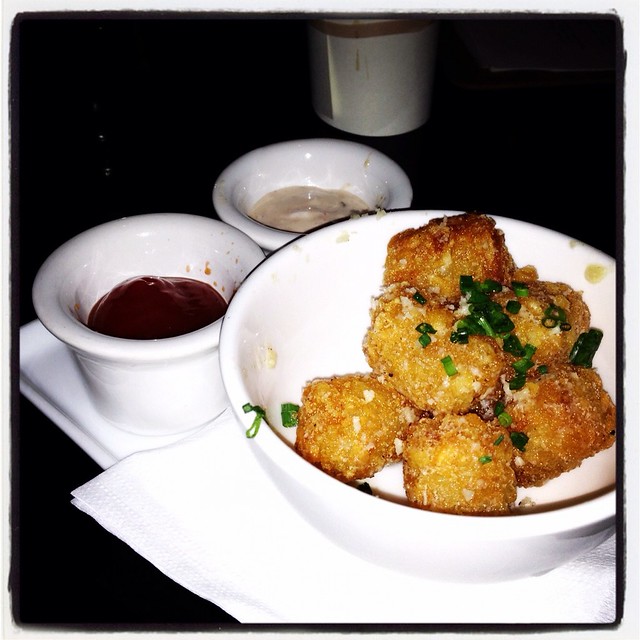 Downtown restaurant Bar & Kitchen‘s off-the-menu “crack” tots aka parmesan truffle tater tots are what drunks crave. At least it’s what I do whenever I stop by B&K for a cocktail. They’re crisp on the outside and tender on the inside and so savory. And thankfully not greasy, making it easy to lose count of how much you consume. It’s cliched to say it but you honestly can’t have just one. Many times I’ve been tempted to go for a second order. 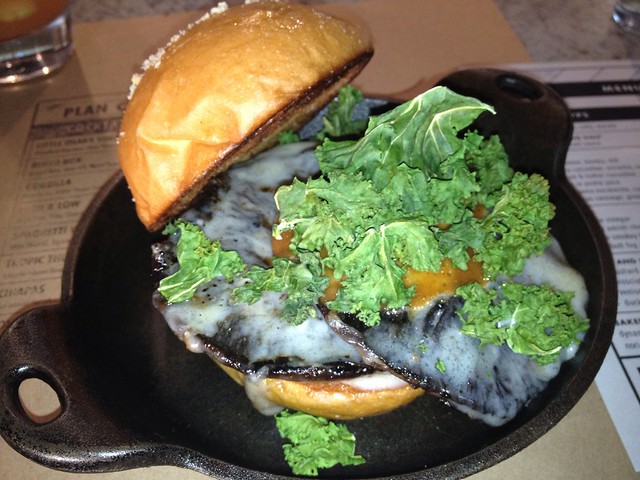 When Plan Check first opened in Little Osaka, West L.A. I was a bit bummed that the vegetarian offerings were so few and insubstantial. There are some apps (veggie chips) and a couple of salads but seemingly no vegetarian burger at all. That is until I asked the server to explain what was in the stuffed mushroom side listed on the menu. “You can order that in a burger,” he said. The mushroom is a sinful mixture of Swiss cheese fondue and steak sauce with some crispy kale thrown in for good measure. The result is something so mouth-watering that even your meat-eating friends will look over at the skillet presentation with envy. 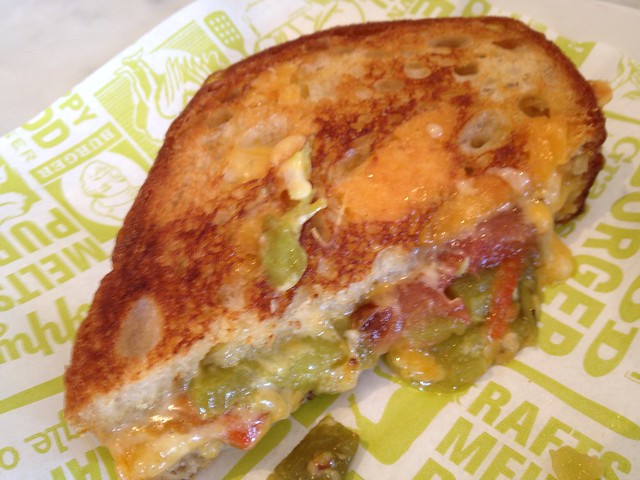 I love going to Short Order at the Farmers Market in Mid-City but after awhile I started to want something other than that veggie burger option (Ori’s Non-Animal Style Burger) so I indulged in the not-healthy-sounding grilled cheese sandwich. It’s made with cheddar and comte sandwiched between La Brea white table bread and you can add even more flavor to it with the optional hatch peppers and tomatoes. Order this up with a side of the potato spuds and truffle aioli and you’re in veggie junk food heaven. 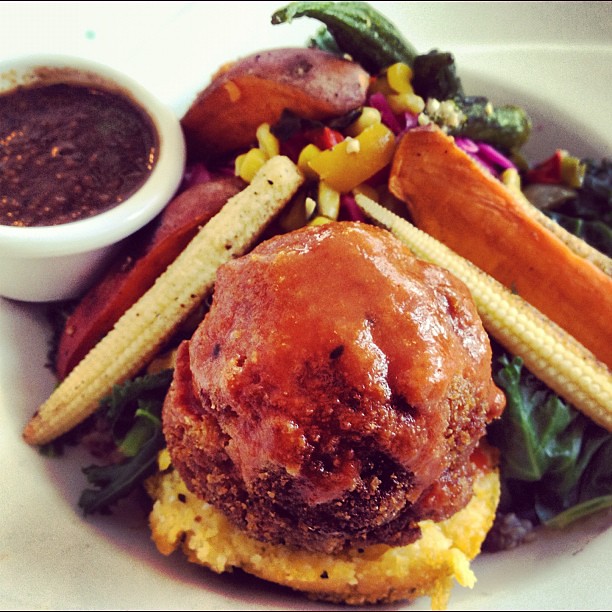 OK, naturally I had to add a vegan option. And Sage Vegan Bistro in Echo Park had the best choices I’ve seen around. So many, in fact, from hot wing salad to street tacos to almond milk shakes. And sure, Native Foods has that Oklahoma Bacon Burger and Veggie Grill the El Dorado Style VG Cheeseburger with jalapenos and caramelized onions, but I figure 1) this list has enough sandwiches and 2) Sage’s Soul Bowl includes a fried ball of mac and cheese! Yes, a deep-fried mac and cheese ball sitting on a patty of garlic polenta. Mixed in this comfort food bowl are roasted sweet potatoes, black beans, quinoa, crisp okra (to die for), baby corn, sauteed kale and horseradish. Best thing about finishing this dish, if you can (I had enough for leftovers later that night), is that you don’t feel so guilty after.