Cheers from the Pour Vous all-stars.

Pour Vous, the new Parisian-themed bar by the Houston Brothers (La Descarga, Harvard & Stone) on Melrose, opened its door to the public last night. And I have to admit I was a little intimidated in going there after reading the bar’s tweets about how one must dress sharp and arrive early to better one’s chances of getting in. And it’s not just a matter of showering and showing up in your Sunday best. Nope, you’re admitted at the door’s discretion.

Eek! What to wear? All my high heels need to be reheeled and I no longer fit in the only evening gown I own. Plus, since I have been to the previous incarnations of this 1,500-square-foot space — Small’s in the ’90s and Forty Deuce seven years ago — I was familiar with how tight things can get in there so that door must be REALLY strict. 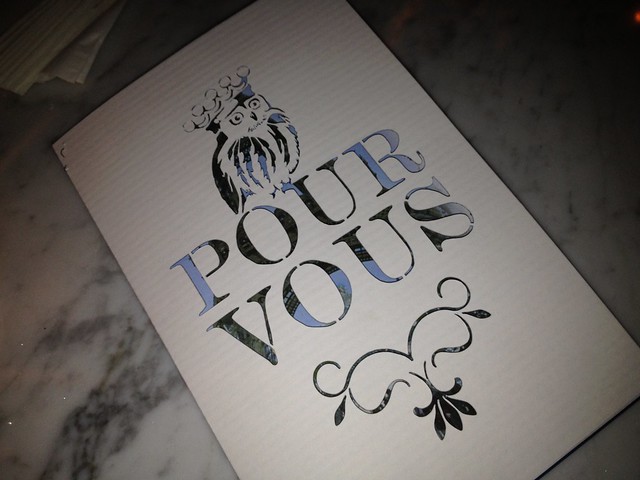 Do not steal this menu.

Fortunately, this was just one of the many things I was wrong about with regard to Pour Vous. Here are the myths busted.

1) Myth: Pour Vous’ dress code is stricter than La Descarga’s. According to Pablo Moix, it’s actually a little more casual. “We don’t like gingham or patterns. It’s kind of like hip, casual, cool. We just don’t want people to look too casual. You can still get dressed up but without wearing the jacket.” At La Descarga, they require men to wear jackets. “There isn’t a set dress code. Our big thing is, just get dressed up for the night…. We don’t like sports attire, we don’t want t-shirts. You can wear a nice V-neck t-shirt, a nice sweater…a nice pair of dressy fitted jeans and some nice shoes or dressy sneakers.” But basically if you want to better your chances of getting in, even though there isn’t a strict dress code, dress up. And, honestly, with such gorgeous, Parisian-inspired surroundings, you’re not going to want to look like a schlub. It’s a “champagne salon,” not a sports bar.

2) Myth: It’ll be impossible to get in. I’m guessing for Pour Vous’ opening weekend, it may be difficult to get in for most. Especially those showing up at 10:30 on Saturday night. But seeing as how its hours are 8pm to 2am SEVEN days a week, you can always come back on an off night like Monday, which I’m thinking will be my night. Or come in when the doors first open at 8. However, even with it being Pour Vous’ opening night last night, Savory Hunter and I sauntered in at 9:30pm and only the barstools were taken while the rest of the venue was free and clear.

3) Myth: The place is teeny tiny. OK, yes, the place still is tiny with an 80-person capacity but they really made great use of the space. There are three levels: a step-down level for several two-top cafe tables, the bar level with seating along the wall with cafe tables, and a third level up behind the DJ turntables. The bar is now on the opposite side of the wall from where it was when it was Smalls and Forty Deuce so it greets you when you first walk in. And out back on the patio is, literally, the Trolley of Death, a hangout for smokers. Heh. 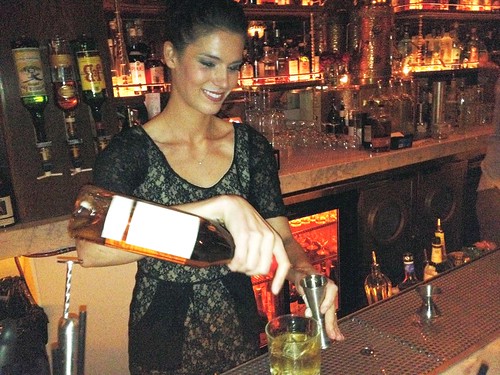 4) Myth: It’s a champagne salon and the focus will be on champagne. They do have a lot of champagne and will do a lot bottle service but they also have cognac tasters (small bottles of three different cognacs) as well as 25 amazing cocktails and a small draft selection. The cocktail menu is divided into five categories of Aperitif (palate-opening, light, based on traditional aperitifs), Parfum (feminine in flavor and appearance, hit with aromatics), Potion (masculine, robust), Par Avion (inspired by French colonies), Sante (health-inspired cocktails), “to take you through the different aspects in how the French drink,” said head bartender Dave Fernie.

5) Myth: The cocktails are outrageously priced. Since this place seemed all fancified with its French salon vibe and champagne talk, I figured the drinks would be $17 and up. I mean, the Hollywood Roosevelt’s Library Bar increased its cocktail prices to $17, why not a tiny champagne salon? Thankfully, I was very wrong. The cocktails range in price from $12 to $16. When we’re talking a well-made drink list by the best bartenders in the city, that’s not bad. To see the drinks on the menu and what the bartenders have to say about them, hit the jump.

6) Myth: It’s Pablo and Steve’s show. With an all-star bar crew — Lindsay Nader (PDT, Harvard & Stone), Devon Espinosa (Tasting Kitchen, Ink), Adrian Biggs (La Descarga) and Dave Fernie (Harvard & Stone, La Descarga) — every night you go in will be a good night, whether or not mixologists Pablo Moix and Steve Livigni are there. Unlike other bars where if your favorite bartender isn’t in, then you skip it. Cough::Library Bar::cough. “It’s such a group effort. Everyone of us has run our own program, we’re kind of just coming together to support each other,” said Lindsay. “Working with these guys is so inspiring. We’re really bringing each other’s cocktails up,” said Devon.

The bar is wonderfully done, from its architecture to decor to drink menu to service. It’s definitely the perfect date spot. Cozy up to your honey at that table on the first level closest to the fireplace to get some distance from the crowd. Groups of friends may want to congregate on the third level, not only is it closest to the smoking patio but you get a great perspective of the room. Naturally, my favorite seat is at the bar. And with the caliber of these bartenders, they’ll be fun to watch. I so can’t wait to be the Foursquare mayor of this place.

Le Mepris ($16): Calvados, violette, Aperol, zest. By Lindsay: “The title of a very famous French film called Contempt. That’s going to pair really well with cheese. It’s funky but floral and has a nice mouthfeel to it. That one I love.”

Eau de Chambery ($12): French vermouth, maraschino, bitters. By Lindsay: “I was reading about French drinking culture and it’s really common to take a vermouth base and just mix it with bitters. So I wanted to embody that but add just one more ingredient to make it more palatable for Americans.”

Biere Bleu ($10): Lemon, blue curacao, beer. This is essentially a Daisy made with Duvel Moortgat, a Pilsner-y ale. “It’s a fun poke at clubby stuff,” said Dave, as in France, clubbers usually ask for blue curacao in their beer.

Moulin Rouge ($16): Vodka, Aperol, bitters, citrus, orgeat, strawberry, bubbles. Based on a Bellini. “It’s a drink that they serve in a place called Le Baron in Paris that’s owned by the guys who own La Beatrice and Smoke and Mirrors now. And it’s just a really sexy place and the only cocktail they really serve is just strawberry puree and champagne. We wanted to one-up that a little bit so we took it in a different direction. But I think it comes across kind of like a balsamic strawberry kind of dessert with champagne,” said Dave. 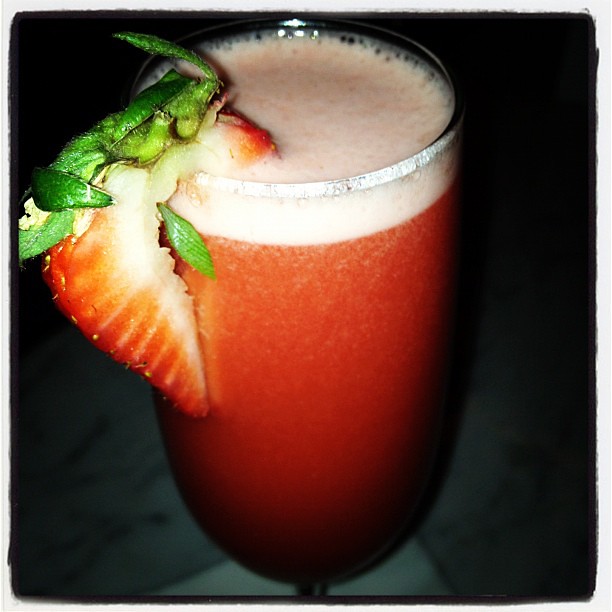 Moulin Rouge: Said to be the sexiest cocktail in Pour Vous. Definitely gets you in the moood. 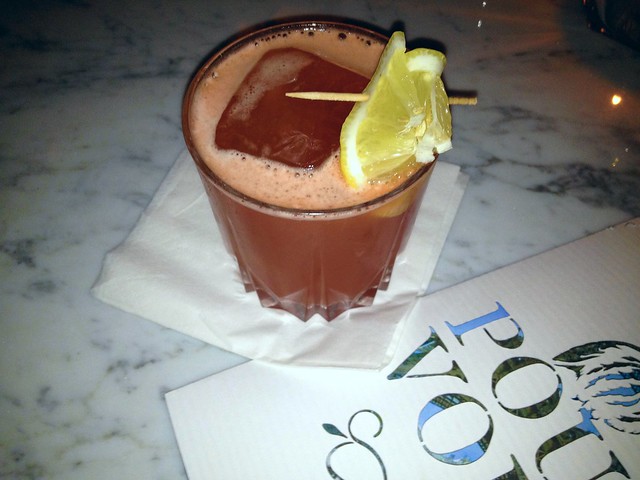 Pret a Poire ($14): Armagnac, pear, eau de vie, citrus, bitters, atomized canella. “We hit it with a little housemade canella so you get this really nice cinnamon nose and then it’s like this warm air kind of thing,” said Dave.

La Vie en Rose ($12): Lillet, framboise, lime, pineapple, rosewater. By Adrian: “It’s a beautiful girly drink served over crushed ice with a rose petal. The ladies are going crazy for it. It is delicious.”

L’Amour Amer ($14): Vodka, St. Germain, Fernet Jelinek, lemon. By Devon: “It actually doesn’t sound good when you read the ingredients but when you taste it, it’s friggin’ awesome.”

Petanques ($12): Cognac, Branca Menta. A Stinger cocktail. “If your grandpa was French, he would be sipping this while tossing bocce around the backyard,” said Dave.

L’Indochinois ($14): Bonal, lime, Curacao, Thai basil, cucumber. By Devon. Bonal is made out of gentian root which is used in a lot of bitters.

Le Catabomber ($12): Gin, Floc de Gascogne, lemon, orgeat, bitters. A nod to L.A., this is “an amalgamation of the Corpse Reviver No. 2 and a Beachcomber,” said Dave. 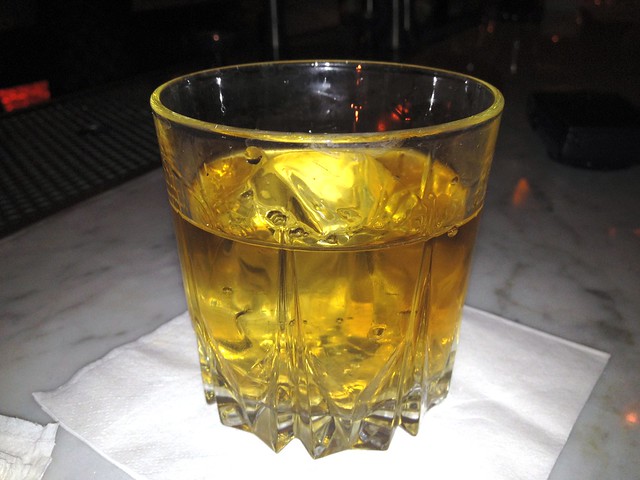 Le Samourai: Very savory and intense. Not for the faint of heart or palate.

Lapin Fou ($14): Poire eau de vie, carrot, lemon, Velay Jaune, ginger. By Lindsay: “I was working on a carrot juice with yellow chartreuse drink at PDT and I never finished it. And when it came to recipe development, Pablo brought in celery juice and carrot juice and apple juice so I was like ‘Oh, I should try and finish it.’ And it just came out really well.” 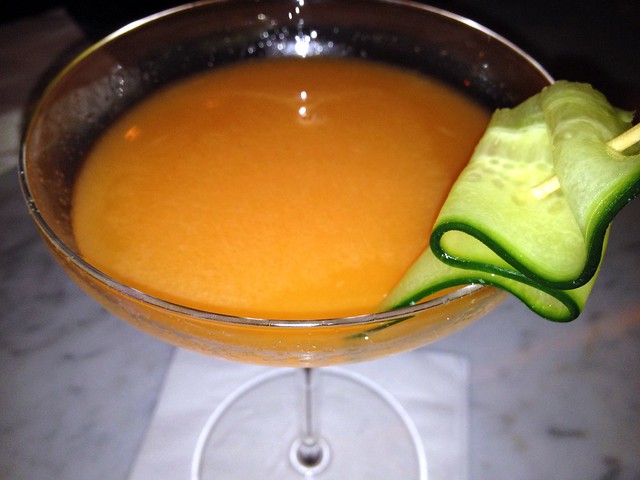 Lapin Fou: Love the savory sweet of the carrot juice and a hit of ginger.

Parfait ($16): Cognac, ruby port, Barbados rum, orgeat, lemon, blueberries, egg whites, probiotic. By Lindsay: “It’s kind of like having a yogurt. It’s delicious.” “To mimic that bready taste of the granola, we do just a touch of overproof rum which brings in that buttery, malty flavor,” said Dave.