Recently I’ve become a big fan of vacationing in my own town, or “staycationing” as the kids are calling it these days. What better way to get to know Los Angeles’ neighborhoods than shacking up for a bit and exploring the surroundings? Sure, it’s an exercise in luxury but then again, if you can find a screaming deal or just want to treat yourself for a special occasion, why not? Fortunately I was able to take LA staycations at some of the coolest (read: closest to my favorite bars) hotels. Here’s where I stayed and what it felt like going native for a night.

The hotel: The kid brother to the swanky-hip Palihouse Holloway in West Hollywood opened earlier this year. The 32-room boutique hotel used to serve as senior housing and a hostel, and unfortunately it’s still THAT basic. Sure, it’s got great decor of found paintings and vintage-inspired furniture but all that is overshadowed by its low-income housing-thin walls and its limited amenities (no in-room phone or thermostat, no booze in the miniBAR). I did take comfort in the fact that there was free wifi, a big fluffy bathrobe to borrow and that the surrounding area had lots to keep me out of the hotel. However, if I had to pay the regular amount for a 270-square-foot room ($245 for a double, $295 for a queen) instead of the $99 deal I got through Travelzoo, I would have been really pissed off. If, for some reason, you’re curious about the hotel, there does seem to be a $99 “Run of the House” special available through the hotel’s Web site.

The neighborhood: As I said, the saving grace of Palihotel is its location on Melrose and Fairfax, the middle of all that is hip and pretty (stores and restaurants). For cocktailing you can take your pick of quality bar/restaurants like Roger Room, Mixology 101, Short Order and Playa, all within a mile of the hotel. Perfect for strolling and drinking. Grab a bite at fine establishments, again within a mile, at Comme Ca, Cooks County or Ink. For shopping, there are designer stores west of Fairfax like Diane Von Furstenberg and Fred Segal, or all the thrift shops and cheapy boutiques east of Fairfax.

We stayed on a Saturday night and walked less than a mile down to the Farmers Market where we had a tasty veg burger at Short Order followed by several cocktails at Mixology 101. If we were ambitious we could have walked back up to Santa Monica Boulevard to The Surly Goat for some craft beer.

The next morning, we grabbed a cup of pourover coffee at Coffee Commissary up the street on Fairfax and looked longingly at the weekly Melrose Trading Post flea market across the way at Fairfax High. But had to hurry home to walk the dog since Palihotel Melrose unfortunately doesn’t allow pets. Bew. (Actually none of these hotels allow pets.)

Summary: If you just want a place to hang your designer hat and will be out of the hotel most of the time shopping, eating and drinking, AND if you can score a $99 deal, then this is the hotel for you. Just remember to put in your earplugs before you hit the sack. There are freebie ones in the bathroom cabinet. 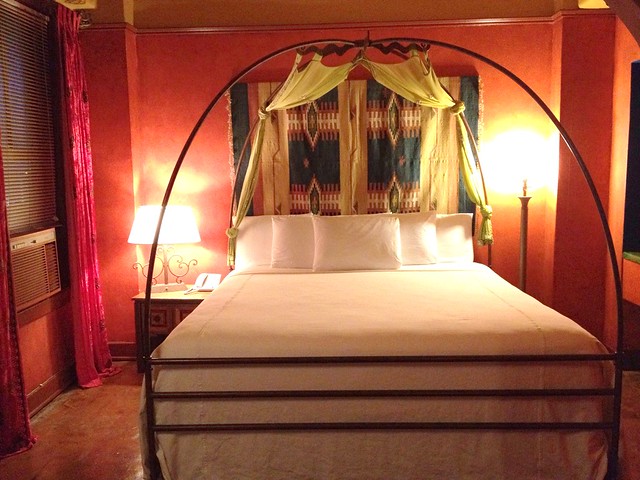 The hotel: This Moroccan-themed hotel on Figueroa Avenue, up the street from LA Live and the Staples Center, was built in 1925 and was originally a YWCA residence. For those looking for a sleek, big-chain downtown hotel with all the amenities, keep on looking. Come on, this was built in the ’20s and still retains that vintage charm, albeit covered up with Moroccan decor and a coat of paint. You won’t find a hair dryer in your room or free wifi and the windows aren’t insulated for keeping out the sounds of city traffic but for those who appreciate the hotel’s architecture and historical feel, those modern conveniences won’t matter. My boyfriend and I booked a night ($148 for a king) last December for our anniversary. The Fig has its own restaurant and a poolside bar but with so many better options nearby, we didn’t bother.

The neighborhood: I chose this hotel for our special getaway because 1) I liked its proximity to some of my favorite bars and 2) I’ve always wanted to stay here ever since I first set foot on the Veranda Bar pre-CoC years. We didn’t get to spend much time in our hotel room though. We had a romantic dinner and cocktails half a mile away at Rivera, then sauntered over to Cana Rum Bar for more cocktails, including a champagne toast, and a nightcap and crack tots at Bar & Kitchen. It was so fun to finally take my bf to these bars I always tell him about and this time he didn’t have to be my DD. Fortunately, we were able to find our way back to our room OK despite all that drinking and an inadvertent detour through L.A. Live. So many lights! The next morning we enjoyed a leisurely stroll and played tourist, taking pictures of the city, on our way to Bottega Louie for brunch and a much needed cup of coffee.

Summary: If you are into that old-timey charm and want to explore downtown, then this is a great place to stay the night. Just bring your own hair dryer and earplugs. 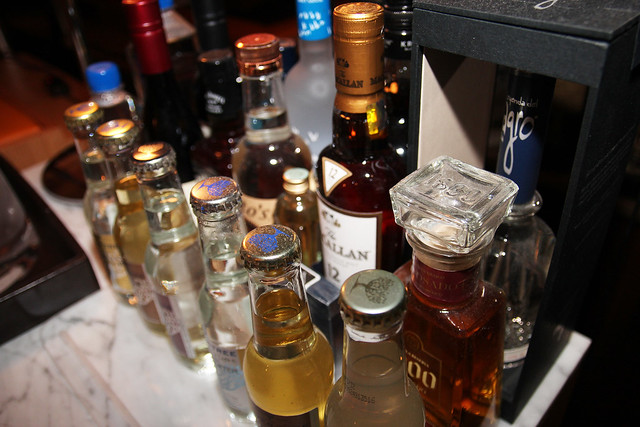 Hollywood Roosevelt has the best minibar I’ve ever seen.

The hotel: This historical hotel was the site of the first Academy Awards in 1929 and even though it’s in a prime spot in Hollywood (down the street from Hollywood & Highland and Grauman’s Chinese Theater), you may never leave it during your stay. Part of the Thompson Hotels chain, the Roosevelt has benefited from a renovation and updates in amenities and technology even though it’s been around since 1927. I was lucky enough to score a hosted night in one of the Cabana Garden rooms (about $349/night), located just steps away from the hotel’s famous pool and Tropicana Bar. Definitely NOT the room to get during the summer when that bar is going full bore, but really lovely for a winter stay. The amenities were basic for a chain — hairdryer, room service, cable, paid wifi. But the minibar was mighty impressive with its selection of not-so-mini bottles of Macallan 12 year and Tito’s Vodka as well as cocktail geek favorite sodas by Fever Tree. But seeing as how a basic breakfast ordered through room service is $22 (for two eggs, hash browns, choice of meat, toast and coffee) I was having none of it. And considering there are quality cocktail bars located in the hotel, I didn’t have to.

The neighborhood: Sure, there’s the Hollywood Walk of Fame, the Chinese Theater, and countless bars and restaurants to check out in a mile-radius of the Roosevelt but after barhopping the hotel’s own bars, I didn’t (and couldn’t) leave. Which was fine with me. It was nice to be able to barhop to venues just steps from each other!

For my hosted staycation, we started off the evening at the Library Bar with Matthew Biancaniello‘s bespoke cocktails, then moved on to Public Kitchen & Bar across the way for snacks and libations like the refreshing Spiced Cucumber Collins. Our hosts then swanked up the evening for us with a champagne bar at Tropicana, which is part of the bottle service and where you get a bottle of champagne along with a variety of fixings (strawberries, peaches, sugar cubes, blackberries, elderflower liqueur). At 25 Degrees, I indulged in spiked shakes, like my favorite Salty Caramel with Maker’s Mark, butterscotch, vanilla ice cream and Hawaiian Red Salt. There’s also a sinful Bananas Foster shake with Kraken Black Spiced rum, banana, butterscotch, vanilla ice cream and Myerss’ Rum floater. And then we capped off the evening with a rousing game of bowling (I lost) at Spare Room. Mixstress Naomi Schimek offered us punch and a variety of housemade infusions. Yup, there was no way I could even think about wandering out onto Hollywood Boulevard after that.

By the way, currently the Roosevelt has a special “Live It Up Package” where you get a $30 credit/night to be used at any of its bars/restaurants.

For breakfast, either grab something at 25 Degrees or, for something more affordable, walk down the street to Tiago Espresso Bar & Kitchen where they have free wifi and Handsome Coffee.

Summary: If you have the money to spend on such a swanky staycation, go for it.