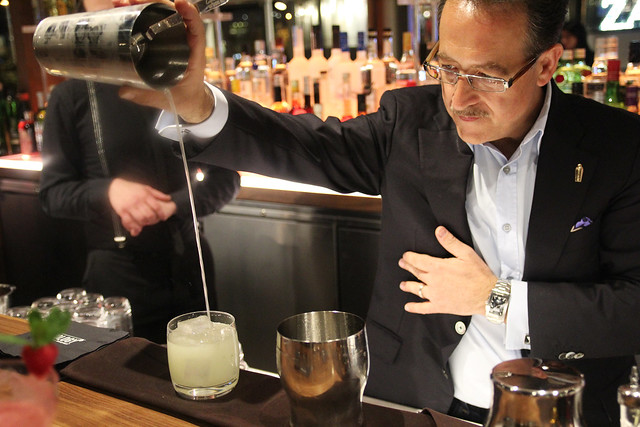 It’s kind of risky naming a new bar after a buzzword, especially one that turns off cocktail geeks and booze writers, but if you let that stop you from checking out Mixology 101, the new Planet Dailies restaurant’s bar at the Farmers Market on 3rd, then you’ll be missing out on a world-class drink experience.

The 215-capacity bar, whose lounge and patio area is located over Bath & Body Works in the corner of the Farmers Market facing the Grove promenade, showcases a cocktail program by award-winning mixologist Salvatore Calabrese. This legendary mixmaster is so well-respected in the cocktail world that even the best of the best are starstruck in his presence. For those not familiar with Maestro Calabrese, you might remember him from that Bacardi “Drink vs Drive” video where he tried to mix a cocktail in a car driven balls out by renown racer Michael Schumacher.

The Maestro and the Conductor

Salvatore, who hails from the Amalfi Coast in Italy, can usually be found at the exclusive Playboy Club in London. A long way to go for a taste of his cocktail awesomeness, and good luck getting in! And that’s why those in the know will flock to his Farmers Market bar, which he has spec’d and tech’d out to his high standards. Even bartender Joseph “Joe” Brooke jumped at the chance to serve as Salvatore’s No. 2, i.e. “conductor,” promptly leaving his position at Next Door Lounge.

“It might not be my sheet music but it’s my first experience with an orchestra,” says Joe. “This has taken me to a level I’ve always wanted to get to. And I’m not saying that I’m there. But this is a chance for me to see what I can do.”

The Best Cocktails Ever? 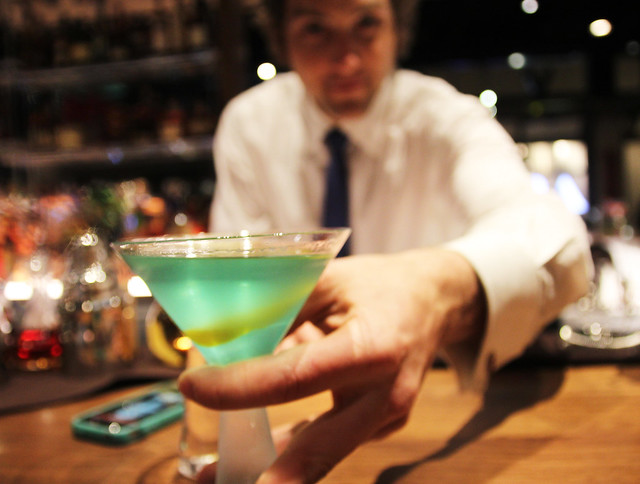 As for the cocktail menu, serving as Salvatore’s first foray into America, all his signatures will be represented with a sprinkling of Joe’s creations. “Between his and my contributions, he’s 80 percent of the menu whereas I’m 20. Eventually it’s going to cross over but his signatures we’ll be holding on to. But I want as a team to start developing the menu.”

Currently guests will have 42 cocktails from which to choose. But those looking for housemade syrups, trendy cocktails or Red Bull (“What is fresh and natural about that?” asked Joe) will be out of luck. Here they have simple classics, Salvatore’s MO, using quality spirits and Monin syrups. “Salvatore does not do any housemade anything. It’s Monin syrups, he has a Monin honey syrup, a Monin sugar syrup…. Because he wants it to be consistent to the point of being indiscernible from the next,” says Joe.

And the fact that the bar is so conveniently located near the Farmers market will keep the cocktails seasonal.

So how will this high-end, Europeanesque bar located in the heart of Tourist Central be able to lure both mainstream Americans bussed in from all over AND local cocktail geeks? Basically “Whatever it is they want, we give it to them,” says Joe.

Yes, folks can come in asking for a Long Island Iced Tea and get the most well-balanced one ever. “Proportionally making it so that the sour and the sweet are in balance with the strong and then you have the modifier with just a hint of Coke. If the cocktail is balanced, then they’re never going to see it coming.” Hmm, even makes me crave one!

And cocktail enthusiasts will get to taste a leading mixologist’s menu and well-made cocktails (it takes 20 minutes for them to make an Old Fashioned — it’s all in the dilution of the sugar). By the way, that House Martini will turn even the most fearful into a martini fan. “It took God six days to create the perfect world. It took me five to create the perfect martini,” boasts Salvatore. But he ain’t kidding. It’s so well-balanced, without that harshness of booze that usually turns most off. Even Joe said it was the first martini he had ever finished.

I was also surprised to find a new favorite in the Hollywood Bubbles cocktail which sounds like it would be all froo-froo and syrupy, especially with its mix of Benedictine, raspberry puree, pomegranate juice and champagne. But again, it comes down to well-balance mixing. This cocktail would definitely be great to enjoy on the patio during a warm spring day.

What Would Forever 21 Shoppers Drink?

For fun, I twisted Joe’s arm for which drinks he’d suggest to the following Farmers Market/Grove stereotypes since they may comprise a huge portion of the bar’s clientele:

Even though I’ve made a point to avoid the C-F that perpetually surrounds that intersection of 3rd Street and Fairfax, I actually am excited about this bar, which opened this week. Located just steps away from Short Order, which features mixologist Julian Cox’s fab cocktails, it would be easy to turn this into a mini bar hop/shopping excursion. Dangerous but fun!

Heads-up: Apparently you have to park at the Farmers Market for Mixology 101’s validation to work. At least that’s what they told me. But, the night I went, I had parked in the Grove garage and was still able to use the bar’s validation. So… yeah.

For more pictures of Mixology 101 hit the jump.