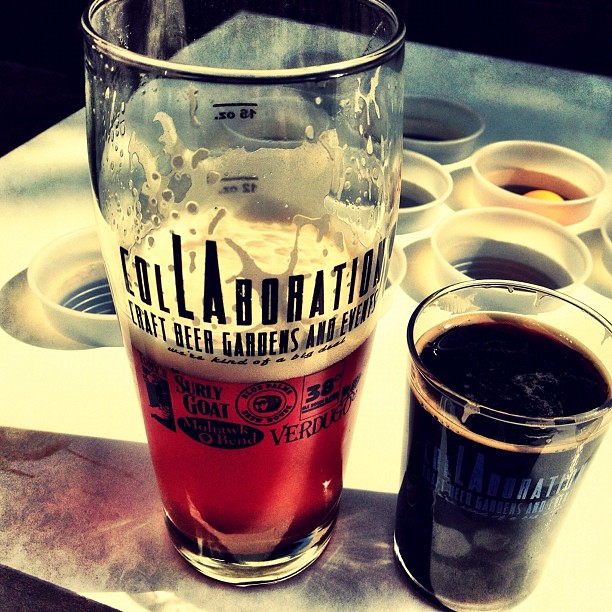 Pliny the Younger, Dogfish Head World Wide Stout, Ballast Point Indra Kunindra Stout. The revival of the recently closed Blue Palms Brewhouse and its beloved truffle burger. All under one roof. That was Sunday’s ColLAboration Winterfest, an epic mobile beer garden — by the great minds behind beer-serious bars like Verdugo Bar, 38 Degrees, Tony’s Darts Away and Blue Palms — which took over the gorgeous 40,000-square-foot Belasco Theatre downtown.

With so much awesomeness in one place, I had feared it would be a clusterfuck and, at the height of the event, it was. The wait for food from the only food source, Blue Palms Brewhouse, was 45 minutes, not counting the 20 minutes we had to wait while the kitchen got its bearings. The lines for beer were long. I had stood in line for the Bruery’s Chocosaurus Rye for many moons only to find out that when I finally got to the front of the line, they were all tapped out. Dammit!

I had no choice, if I wanted a taste of World Wide Stout and Pliny the Younger, I had to use my connections and “Klout” to get to the head of the line. But I did stand in line for all other beers.

The way the event worked the Pliny situation is that they timed it to be tapped at the three bars at different times of the day so they wouldn’t sell out in one shot. Very smart. There was no heads-up when the sought-after brews would be released, you just had to keep your eye on the beer boards.

Fortunately, Ryan Sweeney (The Surly Goat/Verdugo Bar/Little Bear) was kind enough to text me when the first Pliny was available. Later, after I enjoyed the much hyped beer, he cornered me, “So what did you think? I want your honest opinion.” “It was OK,” I shrugged. And it was. Let me preface this by saying that I love beer but that doesn’t make me a beer connoisseur. I know what I like and I generally prefer the darker beers. Honestly I’d go crazy over The Bruery’s Black Tuesday before the Younger, but that’s me.

In any case, Ryan understood my lukewarm reaction, saying that at Verdugo when they tapped out of Pliny, people were complaining, failing to notice that there were still other rarer and more delicious beers available at the bar. Pliny is a good beer — a high-ABV beer but deceptively light, not viscous — but there are many others that deserve the attention. Still, I was grateful that I got to check it off my beer bucket list.

What was great about the Belasco for this event is that there was ample seating. You go up to the balcony with your Blue Palms food and beer and camp out there while watching Strange Brew playing on the three overhead screens. There was also a nice patio area with several beer pong tables for your entertainment.

Despite the crazy-long lines, I know it could have been worse because the beertenders here were working their asses off and were really quick, sometimes taking care of people two or three at a time. Just wish there was more of them.

In any case, lots of good times. And it was a really good idea taking the bus there. We could, and did, drink as much as we wanted.

Beerfest tip: When you go to the next ColLAboration, make sure to bring a buddy and have them purchase the 5-ounce tasting glass with tickets while you get the pint glass. My bf and I did that. So since I had the pint glass, we were able to switch off between high-ABV beers that we just wanted to sip and lighter beers that we wanted to guzzle.