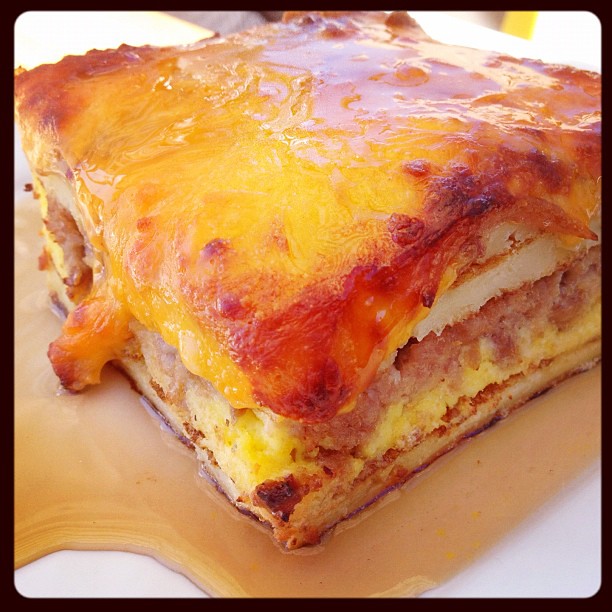 In honor of Fat Tuesday....the Pancake Lasagna at Roof on Wilshire.

After a crazy night of drinking (aka Blogger Barhop 2012), I awoke the next morning to discover that I took home a wonderful souvenir: a hangover. Fellow blogger barhopper Savory Hunter and I decided that getting some beer and comfort food as well as Vitamin D in the form of sunshine would be just the cure we were aching for. So we headed to the Roof on Wilshire at the Hotel Wilshire for brunch.

I had read up on Chef Eric Greenspan’s infamous Pancake Lasagna before and even though I usually stick to the savory stuff for brunch, I just had to try this Frankenstein creation of pancakes, cheese, bacon, sausage, maple syrup and scrambled eggs. Ordered that up with a pint of Oatmeal Stout and an espresso and I was on the road to recovery!

When the Pancake Lasagna arrived I was a little intimidated by its pool of maple syrup and that seemingly thick layer of melted cheese but dug in anyway. My body was crying for it. OK, not really, but my curiosity was getting the better of my instincts to not eat things that might make me erp. Fortunately after that first bite my tummy smiled instead of revolted.

The salty savoriness of the the ground sausage melded nicely with the sweet of the maple syrup which absorbed into the pancakes as it’s wont to do. My saliva glands kicked into overdrive with anticipation of each bite. The only thing is I wish there wasn’t so much cheese here. Not that it interfered with the flavors of the dish, but part of me kidded myself that if that topping of cheese wasn’t there then I wouldn’t feel as guilty as I did.

I hate feeling guilty after I eat but this was difficult to shrug off. I mean, look at that picture! So I tried to content myself with the idea that I would most definitely run five miles later in the day (which of course I did not).

Did this indulgent brunch dish cure my hangover? Not really. But let’s face it the only things that can really cure a hangover are time and lots of water. However, because I felt guilty afterward, it did motivate me to get up and walk around instead of take a nap and waste the day.

If you’re not prone to food guilt, then you definitely have to check out this crazy brunch dish. But if you are, split it with three friends.