Toasting to Ray at Tiki Ti.

Los Angeles is where I matured, drinkingwise I mean. I turned 21 here, fell in love with my first cocktail (White Russian) and quickly realized which bar scene I preferred (low-key lounge as opposed to sceney nightclub). So when Aidan Demarest of Neat and I brainstormed which bars we wanted to hit up for Blogger Barhop 2012: Mustache Ride Edition, we thought it would be fun to pay tribute to L.A. drink spots that helped put our nightlife on the map, mixed in with new favorites.

So our lineup included Three Clubs, Tiki Ti, Bar Marmont and SkyBar representing L.A. of the past, and Neat, The Eveleigh, Pub at Golden Road Brewing and Harvard & Stone for our current hot spots. With Mustache Rides (a van with a mustache on its grille) as our designated driver and Beefeater 24 as our generous sponsor, hitting nine bars in one night (a record for me) was a cinch.

Unlike last year’s Blogger Barhop this time we stuck to our schedule. Ringleader Aidan had the bars lined up and kept time at each one. “We have to be at the next bar by 10 minutes,” “We need to leave here in 10 minutes.” He was pretty good about it, too, until Harvard & Stone where we lost him for a little bit. In any case here’s a roundup of our whirlwind boozy adventures around town with some Tweets from fellow barhoppers to help illustrate our journey. 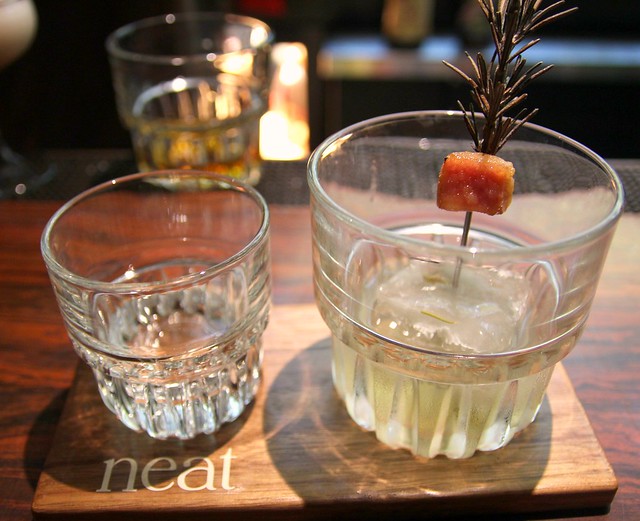 Neat is Aidan’s very own bar. Possessing an impressive selection of spirits, handpicked by the man himself, it’s for the serious drinkers who imbibe for the taste and experience, not so much for getting wasted. Although that can easily happen, too. Here is where we were greeted by a one-night-only Spam cocktail created by bartender Arash Pakzad. He combined Meyer lemon and rosemary ice with the Beefeater 24 Gin. The Spam cube garnish was glazed in brown sugar and rosemary and then torched with an absinthe everclear spritz. Now, I had disowned Spam for 25 years but, here, my reunion with it was oh-so tasty! Click here for a video of blogger barhopper Busy Beth enjoying the unusual concoction.

To fortify our tummies for the long night ahead, we stopped in at this brewpub, Neat’s neighbors, for quick bites of fritters and giant pretzels and sipped on some of Golden Road’s beers on tap like the Point the Way IPA and Golden Road Hef. Mm, that giant pretzel hit the spot, especially with the spicy mustard. Wish we could have stayed longer but after about 10 minutes it was on to the next stop.

Let it be known that we purposely rescheduled our barhop from Monday to Wednesday so we could hit up Tiki Ti, which is closed on Mondays. And glad we did as this must-do Tiki spot provided ample entertainment in the brief 30 minutes we spent in it. Even with our 13 mustache riders, we were still able to get in. Fortunately the bartenders were expecting us and did up an assembly line of Diki Diki cocktails. We stayed long enough to join in a toast to Ray, original owner of Tiki Ti, and to bum cigarettes from an ass’s ass.

When we arrived, Three Clubs, an honest-to-god cocktail lounge that you may know from Swingers, was empty and dark but the bartender lined up 10 cocktail glasses, chilled them and proceeded to make us dirty martinis, which this bar is known for. Suffice it to say, at this point, I could only have one sip. But it tasted gooood. We only stayed long enough to peruse the jukebox, snap some pictures and rest a butt cheek on a bar stool. I definitely have to come back here and explore that cocktail program which was redone by mixologist Joel Black, formerly of Comme Ca and Cana Rum Bar. 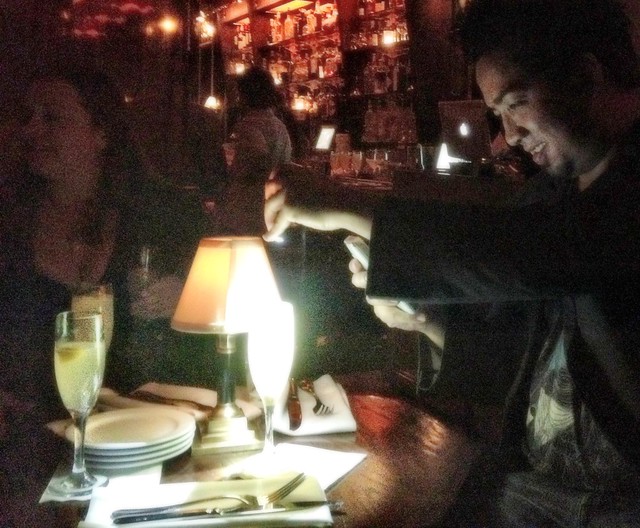 Sneaking a photo at Bar Marmont.

When the door guy said I couldn’t bring my camera in and then proceeded to make us wait outside, I already disliked this place. In my L.A. history I’ve only been in Bar Marmont a couple of times and at this moment I remembered why. Douchey! When they finally let us in, we had a table reserved in the back, they served us champagne cocktails and brought us some food. Since we’re bloggers, we started to snap pictures from our cell phones. I mean, how can we not? Plus I thought we had already cleared this issue when we initially booked the table. But then were told that we would get kicked out if we continued to do so. It’s not like we were in the main room and there were celebrities around but whatevs. After a couple of sips it was time to move on again anyway.

Stop #6: The Eveleigh in West Hollywood

Yay! Love this WeHo bar which has the best cocktails on the Sunset Strip. We were greeted at the front door by a table covered with gorgeous cheese plates, ice beds of oysters and other goodies for feasting. Bartender Dave Kupchinsky was behind the bar mixing us up some cocktails. At this point I don’t remember what the cocktails were and I only took one so I could snap a photo of it. Though, had I known there wouldn’t be drinks at our next stop I would have enjoyed it. But I was so thankful for the delicious spread here and wish we could have stayed longer. 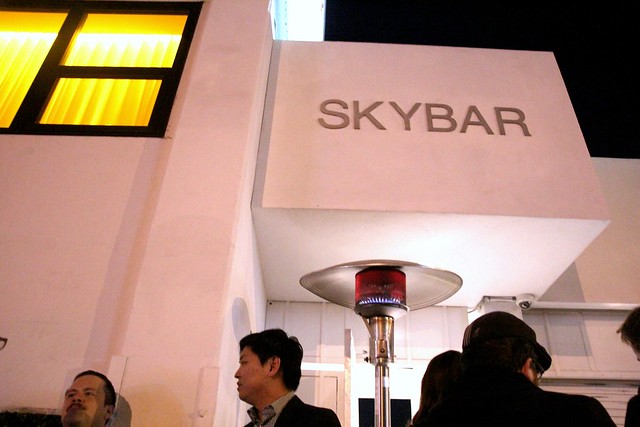 Waiting to get into SkyBar.

@mikeprasad : @MondrianLA #Skybar Ordered bottle to get #bloggerbarhop2 in. No cameras = no feature coverage on @MXLGY & others. Guess you don’t need it.

This was the least favorite of the stops on the tour, even though at the same time it was intriguing. I mean, you can’t really say you’ve done L.A. nightlife until you’ve spent some time queuing up at Mondrian’s SkyBar. Yup, even though Aidan had made arrangements beforehand like he did with the other bars to get us in, the door guys had us waiting outside for a long while. And they wouldn’t let us in until we promised to do bottle service. But that didn’t matter anyway, once in all we did was lounge around a big bed in the midst of couples making out and peek at the view, which is claimed to be one of the best in the city. After 15 minutes of waiting for something to happen, our boredom overpowered our thirst so we jumped back on the Mustache Ride.

This Hollywood bar was actually not on the “official” itinerary but since we heard it was bartender Lindsay Nader’s last night before she left for her new stint at the opening Pour Vous, we had to stop by and send her off. When we landed at the door of H&S, we heard the door guy say something along the lines of  “The bloggers are here” aka “Red alert, red alert” into his walkie before letting us in. Immediately we headed to the back R&D bar to visit Lindsay who was a controlled flurry of cocktail shakers and liquor bottles, amid a room full of other bartenders like Pablo Moix (Harvard & Stone, La Descarga), Alex Straus (Hemingway’s) and Armando Conway (La Descarga). Talk about grace under pressure. We also ran into bartenders Jaymee Mandeville (Drago Centro) and Devon Espinosa (Ink, Pour Vous). What a perfect way to end a night before heading back to home bar Neat! After having lost Aidan for a little bit, we were able to regroup and get back on the van for the last Mustache Ride of the night.

Back at Neat, hard-core bloggers enjoyed nightcaps of Fernet as Beefeater 24 ambassador Erick Castro passed out cozy Beefeater 24 hoodies and I handed out hangover kits containing a bottle of Guinness Stout, Detox tea, Emergen-C and gift certificates for hangover treats to Sadie, Fat Dog, the Raymond’s 1886 and Joe’s Restaurant.

@Carolineoncrack: Turns out that giving a goody bag containing a bottle of stout AFTER #bloggerbarhop2 is a recipe for disaster. @mikeprasad

Blogger Barhop 2012 was a crazy whirlwind of a cocktail tour, akin to traveling to nine countries in a week, but what a ride! Can’t wait to see what other personal records we can break in next year’s barhop!

Hit the jump for a slideshow of all 144 photos of Blogger Barhop 2012 if you dare.