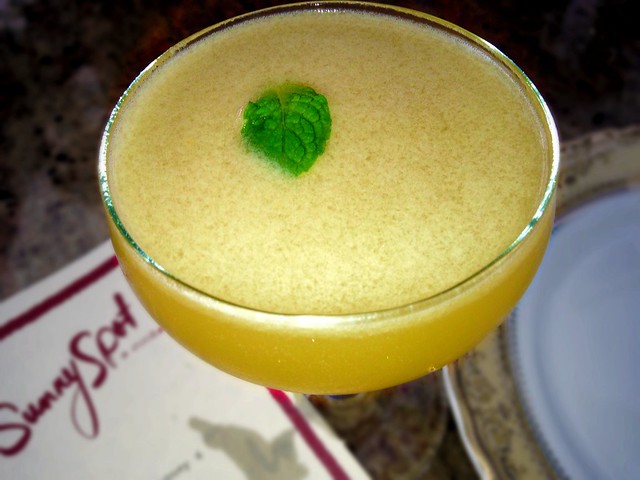 It’s been a long time since I’ve been somewhere that’s made me downright giddy. And leave it to a restaurant called Sunny Spot to do just that. Chef Roy Choi of Chego and A-Frame opened his Caribbean eatery last November, taking over the old Beechwood spot on Washington Boulevard in Venice. And everything about the colorful Shabby Chic venue evokes a smile. From its whimsical floral patterned bar stools to its gold place settings to its rum list to its Rum Den.

I stopped in on a lazy Saturday evening for an early dinner. At 5pm the place just opened so we had our pick of seating in the front room and patio and chose the latter which, although it was a bit chilly out thanks to the setting sun, was sufficiently warmed up by overhead heaters. Note: The restaurant also has a back dining room, the Rum Den, which seats 56 people and is reservation only and also features a standing room-only bar. 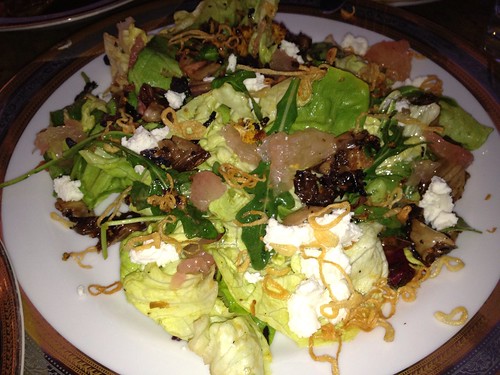 I had meant to visit Sunny Spot ever since it opened but not so much for Chef Choi’s cuisine as for mixologist Brian Butler’s cocktail menu. I’ve liked his flavorful and straightforward concoctions at A-Frame and was looking forward to seeing what he’d do with West Indies-inspired rum cocktails. And the man did not disappoint.

He has 10 drinks ($12 each) listed on the menu, most made with different types of rum like a Nicaraguan 12-year in the Sunny Old-Fashioned and pot still rum in the Dry Harbour. But there’s also the Westfall with tequila, mezcal, lime, falernum and apricot and the Fleur-de-Lis with gin, hibiscus, honey, chartreuse and lime. Since it was still early in the evening and I had an errand to run afterward, I, unfortunately, had to go for something light, even though I had craved my usual of something “stirred, aromatic, served up and not too sweet.”

Our server recommended the Chilcano Bay made with pisco, lime, ginger, lemongrass and Fernet Branca. Now, usually I have a thing against drinks with lime in it. They most often tend to be overpowered by the tart fruit and I can never get past it. But in the Chilcano, amazingly it starts off with that telltale tartness and then finishes with the heat of the ginger. Couldn’t really pick up on the Fernet but still a great drink that I can see myself enjoying on a hot summer’s day. This drink also worked really well with the crazy-hot Diablo rum-glazed prawns ($13). 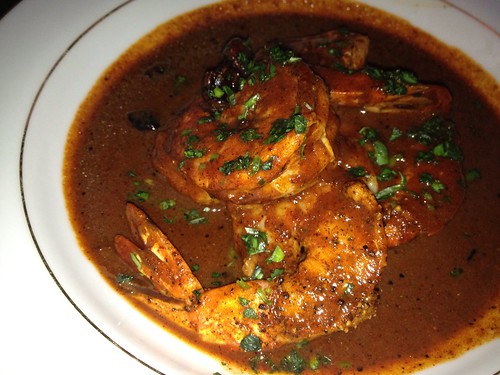 Attack of the Diablo Prawns.

If, for some reason, you don’t see anything you like on the cocktail menu, check out the accompanying rum guide which not only features Sunny Spot’s rum collection but suggestions on which rummy cocktails would best showcase your rum pick. For instance the El Dorado 15-year Demerara Rum was cited as being “glorious in a Queens Park Swizzle” ($13) and the Wray & Nephew Overproof mixed with Ting grapefruit soda and lime was listed as a Jamaican favorite. Love that!

From Sunny Spot’s FAQ:
What is the dress code at Sunny Spot?
As long as you cover your private areas, it’s all good.

As for the food, initially I was afraid that being a pescatarian, I wouldn’t be able to find anything I’d be crazy about on the menu. After all, in other reviews, it seems people can’t stop talking about the restaurant’s Two-Fisted burger or slow-roasted GOAT (“Greatest of All Time”). And based on my past experiences with Chego and A-Frame, the veg-friendly dishes tended to be rich and too saucy for my tastes. But here, Choi hit all the marks with his Sunfire Salad ($11) made with charred cauliflower, pomelo, goat cheese, butter lettuce, radicchio and arugula in chili vinaigrette. Not only was the portion satisfying as either one person’s entree or the main dish split between two people, but it wasn’t overly dressed, it tasted fresh and all the ingredients came together beautifully. 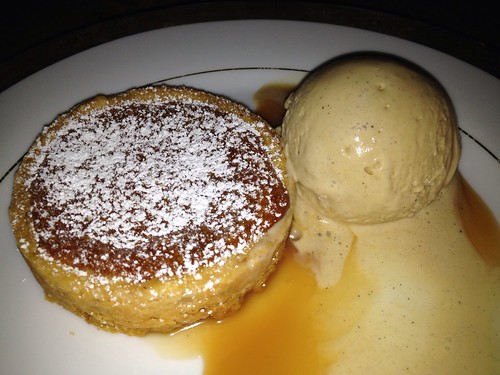 The Diablo prawns, as I mentioned, were crazy hot and uber saucy but an order of the yellow salty rice soothed the burn a bit. “They should have just made the rice come with it for free,” my bf said. That would have been awesome but then would be more of an actual dish than a small plate item, but I like the way he thinks all the same. To round out our meal we also got the fat fingered Yucca fries accompanied with a banana Thai basil ketchup. I was pleasantly surprised to find these non-greasy, unlike most fries, with a crisp baked exterior and tender interior.

Then we finished off our meal with the We Be Yammin (hee!) dessert ($6) of sweet potato tart with a walnut crust and a scoop of marshmallow ice cream. Oh mon! This actually made me do a little dance in my chair; the Cabbage Patch, to be specific. The marshmallow ice cream didn’t taste all that marshmallowy but I didn’t really care. Its slight sweet flavor and texture complemented the sweet potato tart. Word to the wise: I DO NOT recommend sharing this dessert. You must have it all to yourself else to truly be happy. As it was, bf and I were playing fork hockey over the last bite. It’s amazing that didn’t turn into an all-out brawl.

After the meal, I could not stop grinning, even when the check arrived (not too shabby at $57, not including gratuity). This was the best genuine restaurant experience I had in awhile. The service was friendly, attentive and well timed, and it wasn’t even a media dinner. Everything was excellent. I so can’t wait until my next visit to Sunny Spot. A well-crafted cocktail list, nomlicious cuisine, superb service PLUS ample street parking, how could I stay away?

Best seat in the house: The Bird Cage booth in the Rum Den (date or small group of friends) or hold court at the picnic bench on the patio.