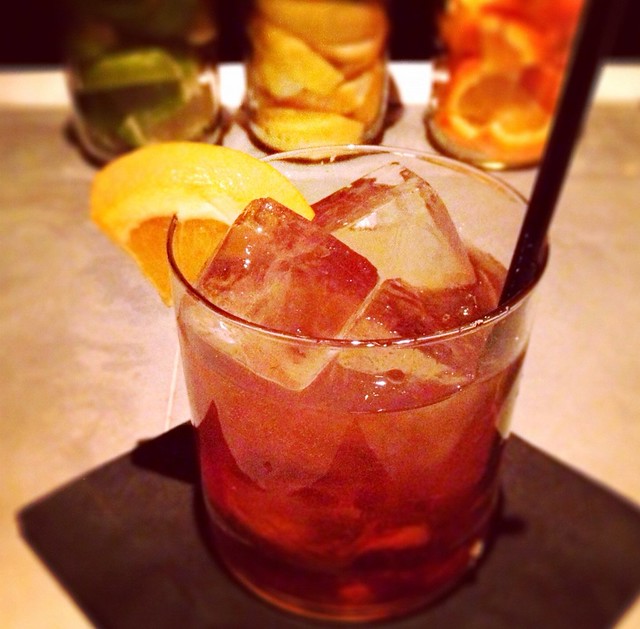 I really like Freddy Smalls Bar and Kitchen. I really do. The new gastropub by Jeff Weinstein (founder of The Counter) boasts a menu by Chef Charlie Parker (formerly of San Francisco’s Plum) and its cocktail program was created by a Seven Grand pedigreed mixologist, David Fleisher. Its location on Pico Boulevard fills a hole as the much needed craft cocktail bar in West L.A. Except for one thing…

I don’t really like the cocktails here. And I’m really bummed that I don’t. Otherwise this is the perfect apres-work spot for me as it’s on my way home and just a hop, skip, and jump from the 10 East entrance. Plus the food is excellent, more on that later. But I’ve already been here several times, chipping away at the cocktail list in an effort to find a drink that I like.

Since none of the drinks on the specialty cocktail list, which is categorized in two price tiers of $10 and $12 cocktails, did it for me, I went to the classics, ordering a Negroni followed by a Bobby Burns. The Negroni was just OK and thankfully it was no #cockfail. That balance of the sweet Vermouth and bitter Campari that I love, however, was lacking. The drink itself was kind of thin. While the Bobby Burns suffered from too much herbaceousness.

And I know what you’re going to say, “Caroline, are you sure this is not just a case of sour grapes because the bartender was from Seven Grand, where you were banned from?” And to that I say, “Bollocks.” I’ve since developed a healthy cocktail groupie relationship with past 7G bartenders like Damian Windsor, Marcos Tello, Joe Brooke and Aidan Demarest. I appreciate what that downtown whiskey bar has taught my favorite bartenders. So that ain’t it.

Looking at the list, the cocktail ingredients seem to follow a template of what makes a blockbuster-hit cocktail menu: housemade sodas, seasonal produce, unusual syrups and liqueurs, the use of bitters. But then something gets lost in the translation when you actually taste the cocktails. They’re either too sweet or too bitter. Not very balanced.

Ah well, at least the beer list is Freddy Smalls’ saving grace with its selection of craft beer ($6-$9) like Stone Smoked Porter, Eel River Amber and Poleeko Golden Ale. Plus they have a decent list of spirits like Willett 7 yr, Plymouth Gin, Del Maguey Mezcal. So you can order the good stuff neat.

And the food itself will warrant many repeat visits. My bf and I found that splitting three veg dishes, an app (from the left side of the menu) and a dessert will fill us up nicely. Nom-worthy mentions include the fried brussels sprouts with the smoked goat cheese, the savory mushroom and farro stew and the Belgian waffle dessert with bacon butter and bourbon-maple syrup.