Sadie LA, the new Hollywood gastropub which opens its doors January 24, is taking over the spot previously known as Les Deux (or Les Douche in snarky circles). And, no, it’s not your imagination, just in 2010 Les Deux did go through a remodel, mellowing out from celebutard nightclub to a low-key neighborhoodie spot called Les Deux Estate. But apparently that didn’t work out because here it is again, refreshed with LD’s same chef David Schmit and beverage director Giovanni Martinez, both previously from Buffalo Club.

Hopefully the name change to Sadie (after the owner’s grandmother) will be the move away from Les Douche that it needs to open people’s eyes to this new bar/restaurant. I got a quick glimpse of Sadie during a Bols Genever Hollywood Cocktail Punch Crawl and it definitely was working the chill vibe; its glowy green bar chairs were gone. It was an easy transition for our crawl to hop from Sadie to our next stop on the crawl, Wood & Vine, which shares a similar grownup pub atmosphere. 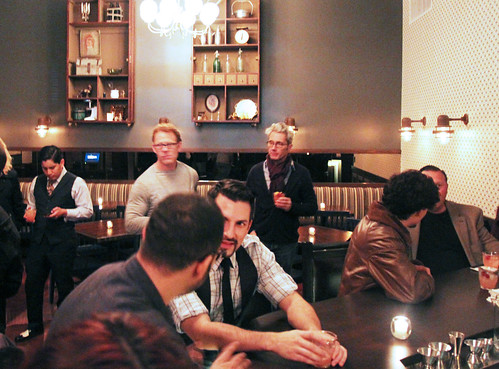 Thanks to Giovanni’s cocktail menu, Sadie will slot in nicely with the growing population of handcrafted cocktail bars lining Hollywood Boulevard, from Spare Room and Library Bar at the Hollywood Roosevelt to Hemingway’s Lounge, The Writers Room and Wood & Vine. Here you’ll find unusual infusions like lychee black tea-infused tequila and a white pepper and cardamom-infused Dolin Blanc Vermouth, as well as lots of housemade syrups.

Giovanni said that when creating the bar program for Sadie, he wanted to keep the food center stage. “As with the food, most items on our drink menu hope to reflect the bounty as well as diversity of America through each ingredient.  It is with this in mind that we structured our menu, full of rich complex flavors and ordered in such a way as to create an entire culinary experience from the very start,” he said.

Some of the more eye-catching concoctions? A couple of beer cocktails like the Gran Prix which is made with a chrysanthemum-infused Beefeater gin, honey syrup, lemon juice and topped with Racer 5 IPA. And the Double Black Diamond by The Varnish mixologist Daniel Eun with Green Flash Double Stout, Blackwell Jamaican Rum, cream, sugar, whole egg and fresh grated nutmeg.

Here’s a sneak peek of the opening cocktail menu for your consideration. Prices are the standard Hollywood tier of $12 to $14.

But I’ve got my eye on that Velvet winter cocktail with aged Guatemalan rum, raisin-infused balsamic and housemade lemon clove syrup. Intriguing.

For beer lovers there’s a small selection of bottle and tap ($8-$10) featuring the likes of Stone Levitation and Alesmith Nautical Nut.

Doors open next Tuesday, but I plan to get my lips on these cocktails at the preview party tonight. Stay tune!