Blog Bite: A Tale of Two Manhattans at Ray’s and Stark Bar 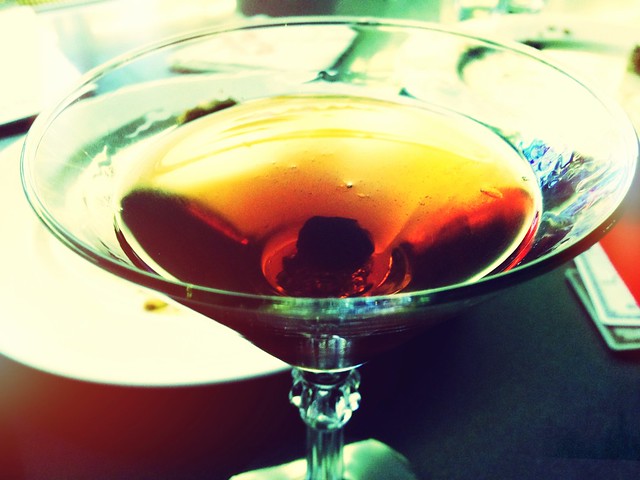 Who isn’t on the hunt for the perfect Manhattan? Last night I attended the hosted cocktail tasting for the winter cocktail menu at Ray’s and Stark Bar in Miracle Mile. Since mixology consultant Michel Dozois is no longer in the picture sommelier/mixologist Paul Sanguinetti took over the cocktail program. For the season he created nine new concoctions, one of which I included in my winter cocktail roundup, the Oaxacan Holiday. But that was before I got to taste the (Far) East of Manhattan.

Now usually I shy away from variations on the Manhattan cocktail as they tend to be disappointing. But this one made me open my eyes a little to the possibilities. Here was something delicious with warm, exotic flavors. Made with housemade masala-infused rye, Amaro Nonino, Sweet Vermouth and bitters it’s a spicy (not hot) elixir. 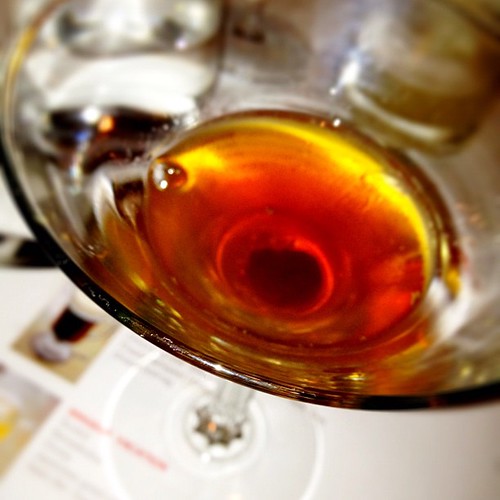 Paul created the cocktail after having been inspired by a dish that Ray’s Chef Kris Morningstar put together last year for the Tim Burton exhibit. “White Rabbit with Tea in a Mushroom Forest” was a rabbit dish accompanied with a masala chai sauce.

“I wanted cocktails that you can actually pair with the food, ” said Paul. “So I was just playing with chai and as soon as I smelled it it made me think of rye whiskey…and one of my favorite drinks is the Manhattan. And I just thought the aromatics, you know the Angostura bitters, that with the chai and the rye all went beautifully together and I threw in the Amaro Nonino to give it that exotic quality, that citrus peel. Split that with Carpano Antica which has a bitterness, kind of gives that depth, too. Instead of doing an ounce of Vermouth I did half Amaro and half Carpano.”

The result is one that stood out from the list of other winter cocktails and one of my favorite Manhattans.

But for the Manhattan purist, there is another option. My friend John Colletti (Social Domain), who has popped up in a few of my posts before as a drinking buddy and co-cocktail reviewer, is a downright Nazi about how his Manhattans should be made.

Suffice it to say, even though I loved the chai Manhattan, he in fact did not. “It’s got no midpalate,” he complained. Whatevs. Anyway, he asked Paul to make him a special Manhattan. So the mixologist decided to combine Old Overholt Rye with Michter’s Rye — “a sacrilege,” he winced as he poured one into the other.

I was in awe as he built this “Working Man’s Manhattan”– carefully measuring, waiting for the ice to chill the glass til it frosted, stirring for a long while, and then letting the mixed concoction sit for many minutes. “It’s all about the waiting,” John assured me as I whined, impatient about getting to taste it. FINALLY, Paul strained the drink into the chilled cocktail glass.

Combine ingredients in a mixing glass. Add some cracked ice. Stir but not too vigorously. Stir some more. Let sit for several minutes. Strain into a chilled cocktail glass.

And I don’t know if it was the anticipation or the buildup but this was truly one delicious Manhattan. “I think this may be the best Manhattan. The perfect balance of spice and caramel,” said Colletti who then gave Paul his blessing to dub it Colletti’s Manhattan. Jealous, after both my friends Mike Prasad (MXLGY) and now Colletti got cocktails named after them, I asked Paul when I was gonna get one. “Only one named cocktail a day,” he replied. Bah. Anyway, Manhattan fans, you gotta try these and then tell me if you agree.