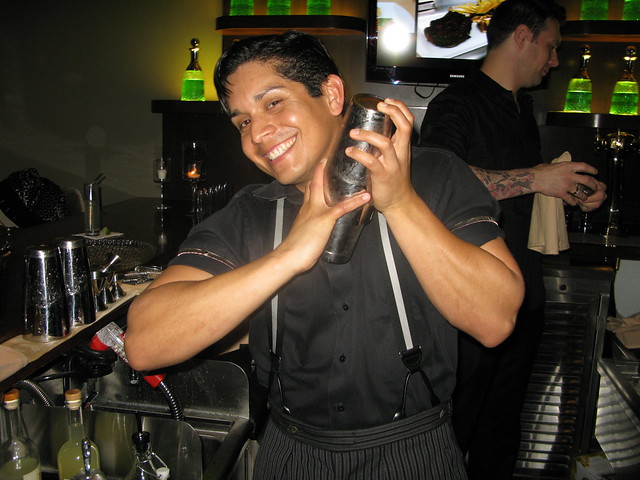 Nobody panic. The Tom Bergin’s shamrocks aren’t going anywhere. Mixologist Marcos Tello assures me that if anything they will only suffer a light dusting. And Marcos would know. He’s the one who has been brought on by Tom Bergin’s Tavern‘s new owners, Warner Ebbink and Executive Chef Brendan Boudet (Little Dom’s, Dominick’s), to do the cocktail menu and Irish whiskey list for the redone Fairfax Avenue bar.

“[The new owners] were very, very interested in keeping all the old folklore, that actual feel of the bar, everything. They literally preserved everything,” Marcos said. “The bar is still the same, they just refinished it. The ceiling and the shamrocks will all be in the same place. They just dusted it off and kind of restored it. They preserved all the historic items but just upgraded things like you want upgraded like the bathrooms, the kitchen, the plumbing. In that aspect, yeah, it’s better.”

Owner Warner Ebbink on how to earn a shamrock in the redone Bergin’s (Los Angeles Magazine, October 2011):

With us you’ll have to be a super regular, but when you earn it, we’ll celebrate your shamrocking and present you with a certificate. It will be a big deal.

For fans of the iconic L.A. bar, this is great news indeed. Not to say that change is a bad thing. Consider that the new cocktail menu Marcos is creating will offer about six to 10 Irish whiskey-centric cocktails. And it’s not going to be the hand-crafted masterpieces that the master mixologist is known for at his previous projects 1886 and First & Hope.

“We have a fast program. No-nonsense program but at the same time it’s going to be very thoughtful of how they’re tasting to the customers and turning them on because 1) we want to keep our old customers. We’re going to honor them first. And 2) we want to bring in new people and celebrate Irish whiskey,” he said. Every drink on that list will be a celebration of the Irish spirit; Irish whiskey in a Manhattan, a Daiquiri, a Sour. Yes, they’re not just for picklebacks anymore.

Fortunately Bergin’s will have a slew of Irish whiskies at its disposal, especially since Marcos proclaims that it will be “one of the biggest if not THE biggest Irish whiskey selections in the U.S.” Currently West L.A. bar Bar Food claims to hold this title, what with its special whiskies in stock that you can only get in Ireland. But with Marcos’ connections and his knowhow Bar Food may have to share the honors. But then everybody wins.

Although there will be this new cocktail list, Marcos said that they will retain some of the original staff and they will all be trained on the classics. So, yes, you can get a Martinez or a Negroni if you want one. But sounds like everyone will be flocking to Bergin’s for the Irish whiskey.

**Tom Bergin’s Tavern is projected to open mid to late February this year, just in time for St. Patrick’s Day.
**

Fun fact: Tom Bergin’s actually inspired the show Cheers and its bartender Chris Doyle inspired the Coach character. Marcos wanted to become a bartender because Sam Malone made it look so fun. So it all comes full circle.