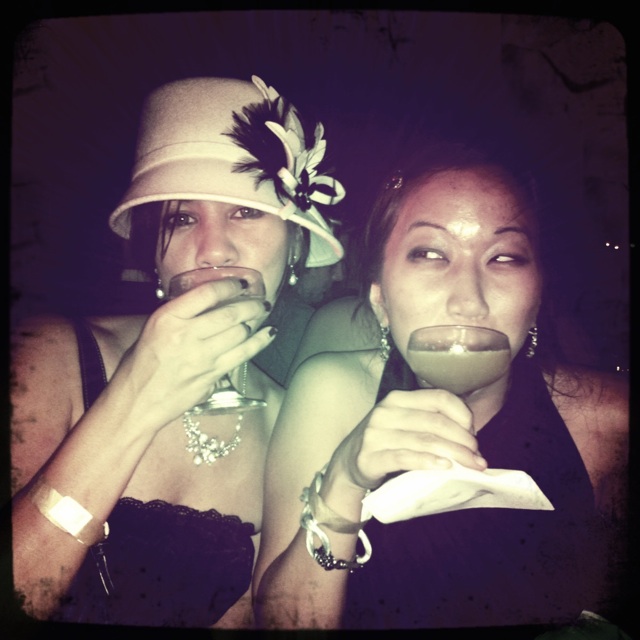 Don’t want to worry about keeping track of your bar tab for New Year’s Eve? NYE celebrations featuring open bars is definitely the way to go. And then you won’t have to remember to close out your check at the end of the night! Fortunately there’s a nice selection of parties going off this Saturday, ranging from a casual wallet-friendly beer fest to casino night in Havana.

By the way, remember to be safe this NYE. You don’t want to start off 2012 with a DUI! Take the Metro (which is free) or call a cab. The LAPD will be out in full force.

The Eveleigh’s NYE Roaring ’20s Soiree — $30 Open bar 10-11pm
1920s seems to be the theme to many a NYE party this year. This one on Sunset features a ’20s-inspired cocktail menu created by the great Dave Kupchinsky. Open bar isn’t all night, just 10-11pm, but you get a complimentary midnight champagne toast and live jazz music. Dress code: ’20s cocktail attire.

Free-Flowing Taps: Blue Palms Brewhouse’s New Year’s Eve Celebration — $55 Open taps
The beer lover’s NYE party. Open taps til 2am, including specialty kegs for the event, an open “call” bar and a midnight champagne toast. There will be passed appetizers but the kitchen will be taking regular food orders as well. Lobster mac & cheese! Not bad for $55 ($65 at the door). Plus the bar will stay open til 3am after the 1:30am last call to give you time to sober up. Aww, so nice!

Los Angeles New Years Eve 2012 – White & Black(out) Ball — $75 Open bar
Party down in a historic Santa Monica landmark. You have to dress in black and white attire for it though. Here you get an open bar, champagne toast at midnight, two floors of live music AND they promise giveaways all night.

J Lounge’s Midnight in Paris — $80 VIP Open bar
At this 1,000-capacity 1920s-Parisian-themed blowout there will be four bars, three dance floors, a photobooth to commemorate the evening, a three-course dinner and gogo dancers. Your VIP ticket gets you the open bar, champagne toast and VIP lounge access.

Tony’s Darts Away’s New Year’s Eve Feast and Party — $95 Open bar and feasting
This party is a great deal considering it’s all the vegan/non-vegan food and California craft brew you can consume for $95. Not to mention the commemorative NYE TDA glass you get, reserved seating and potential raffle prices.

The It Pick: LACMA’s ’20s Soiree — $85 – $150 hosted pre-Prohibition cocktails
This sounds like THE party to hit up for New Year’s what with speakeasy shenanigans, pre-Prohibition-style cocktails, cigars, burlesque and an 18-piece orchestra. If you get your ticket through Thrillist Rewards you’ll also score LACMA’s annual MUSE membership in addition to VIP treatment. At midnight this party one-ups all others with its champagne toast which is accompanied with a fireworks display. Since tickets are limited you have to dress to impress. Diamonds and pearls, Betty Boop!

Caulfield’s Rooftop Party — $100 Open bar ($150 at the door)
This swank Beverly Hills restaurant has a special dinner for NYE but what’s been overlooked is its rooftop party atop the Thompson Beverly Hills where there’s an open bar from 9pm to midnight. RSVP with rsvpthompson2012 [at] gmail.com. If you want the whole she-bang of dinner and rooftop party access tickets are $175 a person. You can also upgrade to table service or, if you travel with an entourage, a large cabana for you and friends for $2,000.

More Quality Booze for Your Buck: Harvard & Stone New Year’s Eve Bash — $100 Open bar with craft cocktails
This bash at Harvard & Stone sounds like you’ll get more than your money’s worth what with the variety of booze at your disposal for just a Benjamin. Indulge in H&S’s well-crafted cocktails as well as cocktail punches, American craft beer and bottomless champagne. PLUS, live music and a DJ!

MyHouse NYE 2012 — $100 VIP Open bar
A Hollywood “house party” where you can sip on cocktails made straight from their “kitchen” and dance in the living room to DJ Orator. If you’re into SBE, paparazzi, Kim Kardashian gossip, then this is the fete for you.

Le Prestige New Year’s Eve 2012 — $120 VIP Open bar
At the El Rey, this strictly enforced dress-to-impress party has a premium open bar which specifically says “including but not limited to Grey Goose, Tanqueray, Bacardi, Patron, Johnny Walker Black, domestic and imported beers.” Dumbfoundead and his band will host and do a mini performance.

NYE at Wilshire — $125 Premium open bar
For those who skipped out celebrating NYE in Vegas this year, maybe this Santa Monica restaurant-turn-casino will do. The $125 admission includes a premium open bar and $200 in fake casino chips to play with. What’s your pleasure? Craps, Blackjack or Roulette? Dress code: suits and evening gowns, cuz it’s swank like that.

Las Palmas Avenue 2012 New Years Eve Block Party — $150 Premium open bar
Sceney Hollywood clubs join forces. For $150, it’s open bar all night for you and a midnight champagne toast as well as access to the VIP balcony which has its own separate bar. There you can rest your tootsies between dance stops at the three clubs which will be playing different music — Premiere (House), Las Palmas (Hip Hop) and Angels & Kings (Rock). Each one will feature their own countdown.

SkyBar’s Shaken Not Stirred — $175 Open bar
At this James Bond-inspired party, guests will sip on martinis while placing their bets at the casino tables. Dress code: Black tie optional.

La Descarga’s Havana Nocturna — $200 Open bar
You know this Havana-inspired rum bar will do up NYE in style. Space is limited so it won’t be too crazy. Enjoy the open bar and six courses of passed appetizers and desserts. For entertainment take in the nine-piece Latin orchestra and burlesque dancers or try your luck at blackjack, roulette and craps. The three biggest chip holders at the end of the night will receive prizes. Dress code: Formal 1920s gangsters and dames.

Official Maxim Black & White New Year’s Eve Affair — $225 VIP open bar
Ring in the new year in the recently renovated Chinese Theatre Grauman’s Ballroom. VIP access gets you an open bar and entry to all levels of the theatre which includes the VIP lounge and the red carpet photo op area. DJs Eric Cubeechee and Romy Ancona will be spinning some danceable mashups. And apparently there’s a “big surprise live act coming your way, too.”

Honorable mentions: These aren’t open bar events but they do offer some fine drinking.

Big Bar — Want to drink around the world without leaving your bar stool? This little Los Feliz drink hole will feature a new specialty cocktail ($10 each) to celebrate each timezone hitting 2012. Ring in the new year with Berlin by toasting a Husker Du (vodka, Aperol, lemon, bitters) and cheers L.A. in 2012 with a Historic Core (Rittenhouse bonded, Lairds bonded, Chartreuse, Dolin, Angostura).

Neat — For something more low-key, this Glendale bar will have champagne toasts at nine and 12 as well as a live band. And you can order Chinese take-out at the bar.