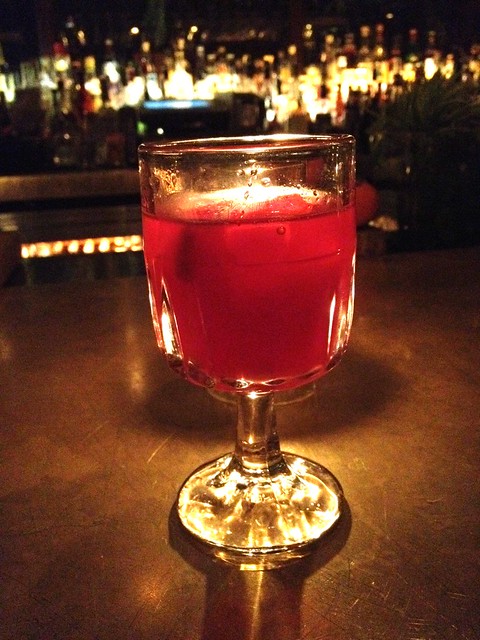 Last night’s boozy Boxing Day Social charity affair at the Hollywood Roosevelt’s Spare Room raised about $2,000 in addition to collecting blankets and clothes for downtown’s Hospitality Kitchen. For the $10 donation at the door, guests were treated to turkey-on-rye sandwiches, Wild Geese Irish whiskey tastings and a Jenga tournament as well as three free-flowing cocktail punches created by hostess and SR beverage director Naomi Schimek. (Hit the jump for the Boxing Day Punch recipe — and for more pictures.)

Naomi also came up with the idea of auctioning off L.A. bartenders and their respective bar tabs. Since it’s usually against policy for bartenders to drink at the bar where they work, the bar tabs were thrown in a hat and then each bartender had to draw one out. Luckily no one pulled out their own tab.

The mixmasters who drew the highest bids were Spare Room’s Lauran September who raised $200 for a date with her at Harvard & Stone and Naomi who was snapped up by both Aidan Demarest (Neat) and the event’s emcee Dan “The Imbiber” Dunn for $200. The trio will be enjoying beers and shots at La Cita. Someone should make a reality show about THAT date!

The significant others of some of the bartenders took the auction as an opportunity to score a budget-friendly date night. Hilary Straus, wife of Alex Straus of Hemingway’s Lounge, won her husband and a $175 bar tab at Baby Blues BBQ for a cool $100. While La Descarga’s Kenny Danger and the Hemingway’s bar tab was won by Kenny’s girlfriend.

The cocktail community turned out in full force to support the charity. It was fun hanging out with fellow cocktail enthusiasts like LA/OC Foodventures and Faux LA Hipster as well as mingling with Georgia of Alie & Georgia and The Savory Hunter. My fave moments of the night had to be tippling that intense cocktail punch made with Salerno blood orange liqueur and getting Dan Dunn, Aidan Demarest and Spare Room co-owner Marc Rose to jump in the photo booth for me. That photo strip is going up on my refrigerator.

If you missed out last night, not to fret. Naomi said that this will be a yearly event so start saving up your cash now. Who knows who will be up for bid next year?

Combine the ingredients in a mixer filled with ice. Add a dash of angostura bitters to taste and a dash of cardamom tincture to taste. Shake and strain over ice in a rocks glass. Garnish with micro-planed nutmeg.
Get the flash player here: https://www.adobe.com/flashplayer