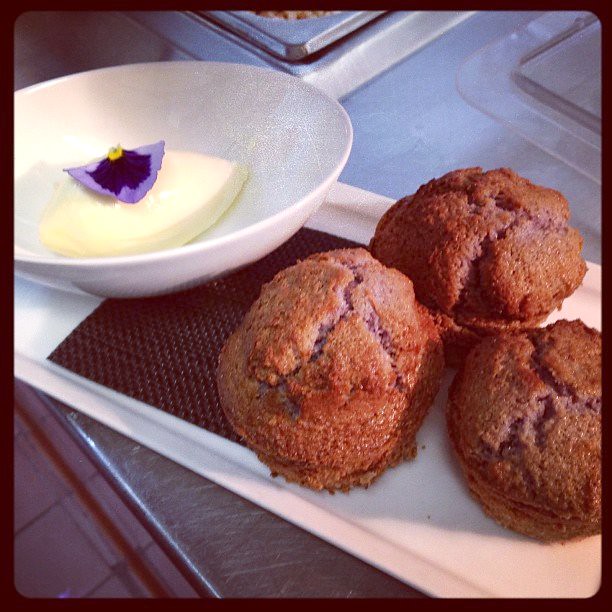 “You want to go to the kitchen with me, Caroline?” Nastassia Johnson (@LetMeEatCake) of Sauce LA asked me with a mischievous glint in her eye. We were standing around waiting for more passed plates at last night’s Esquire Magazine party at Playa. The schmancy party was to celebrate Chef John Sedlar being lauded by the publication as Chef of the Year. Huzzah, indeed! 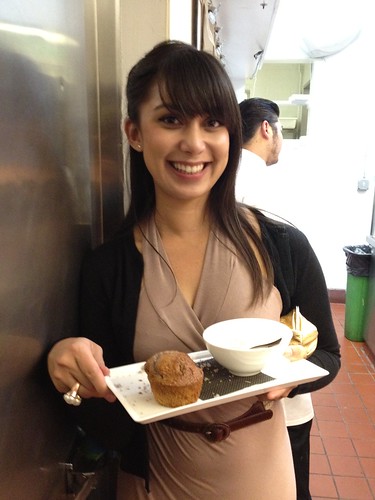 But back to that secret kitchen excursion. Since it was currently buzzing with appetizers being plated and brought out and a flurry of servers, I looked at Nastassia skeptically. But she assured me that Chef de Cuisine Kevin Levande OK’d it saying that I was only allowed in because I was Filipino, too. Hayyy! Turns out he had a batch of blue corn muffins made with Anson Farms Organic Cornmeal for Nastassia.

It’s something that’s only available at weekend brunch which she could never make so here, in the middle of the chaos, he was able to make some for her. And she so very generously asked if she could share them with a friend, me!

The trio of warm blue corn muffins sat on a rectangle white tray beside a bowl of almond butter. Yes, actually plated as if we were ordering them for brunch. Since there was nowhere to sit in the kitchen and we didn’t want to out ourselves to the party that we had these awesome treats, we pressed ourselves up against the wall so that the servers could still get by.

And with no knife with which to spread that delicious butter on the muffin we tried dipping them in and then tried spreading it with a fork. Unfortunately the creamy butter was still not soft enough. When I did manage to get some butter on the muffin it melted onto the warm bread. Its silky-sweet almondness complemented the sweetness of the corn.

But the muffin was just fine sans spread. I tore at its bottom first as is my muffin-eating MO so that I’d have the crunchy, firm top for last. The muffin itself was moist and buttery and not at all dense as I’d experience with most other cornbread muffins. Such a lovely treat. I almost wished I had a nice cup of coffee to enjoy with it.

The blue corn muffins are only $6 for the trio with butter at weekend brunch. Such a sweet deal.