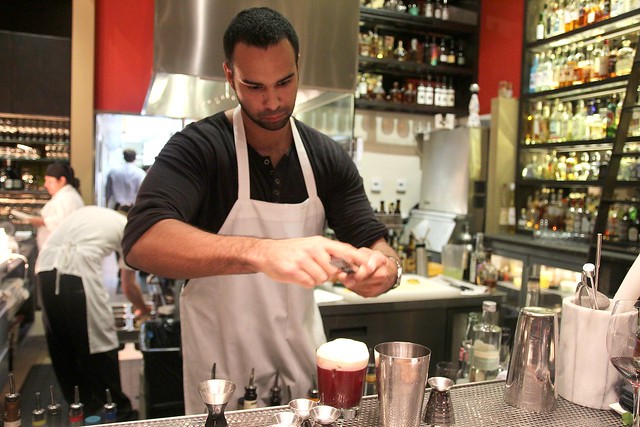 Tonight at Playa  (Best New Restaurant 2011, Esquire) on Beverly Boulevard, renowned mixologist Julian Cox (Rivera, Picca, Sotto, Short Order and Eater LA’s Bartender of the Year 2011) will not only debut a fresh batch of seasonal cocktails but “The Best of Playa 2011” — the most requested cocktails in the restaurant’s 11-month existence. So yes, you can look forward to the return of the beloved A Oaxacan the Clouds and Up and Atom. Woo!

But the new ones are going to be instant favorites as well. I got a sneaky peek of some of them last night and they made me realize that I don’t come to Playa nearly enough. Always awesome food and mind-blowing cocktails. 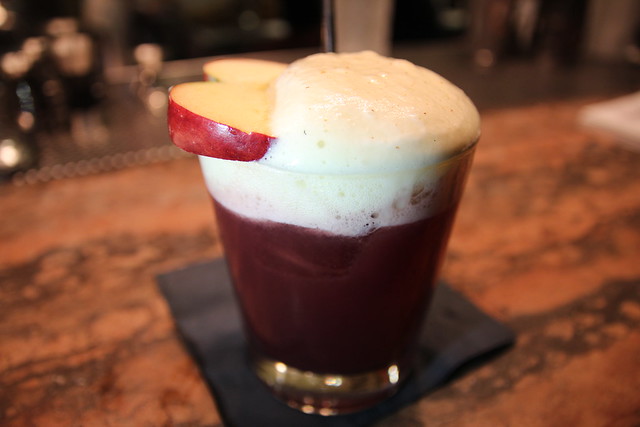 If you love apple, you’ll love the Grail. It’s light and very approachable for those who don’t like drinks that are “too alcohol-y” (weirdos). But it reminds me of fall. A huge basket of apples just picked from the tree. A nice juicy flavor which is evened out by the foam.

Julian had made this preview drink with a straw but then said it’s actually best enjoyed by sipping. Of course he’s completely right because then otherwise you get too much apple juice. ** So ladies, don’t help yourselves to the canister of straws behind the bar. Just wipe off your lipstick and dive in. It’s worth reapplying after.** 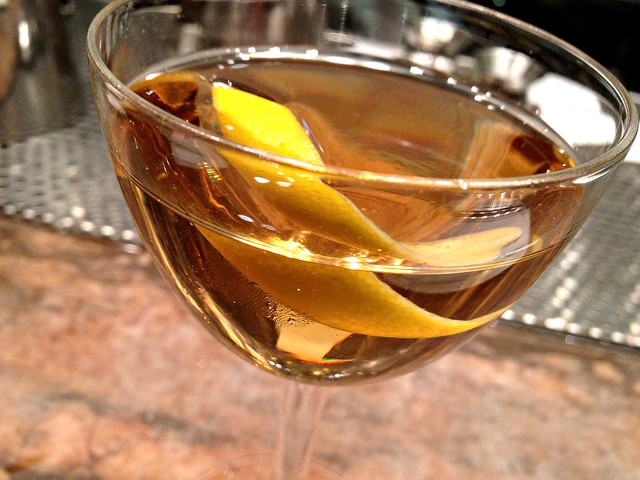 An Andalusian (3 ways) sherry-focused cocktail offers a choose-your-own-adventure type of approach where you decide which sherry to have in your drink. The point is to create a dialogue about sherry and also it’s “very Spanish, to try and make John [Rivera Sedlar] proud,” Julian said. So the difference between each version is that each can be had with different parts of the meal, from appetizer light to dessert sweet.

The Paso Fino is “light and has a grapefruit feel” according to Julian. The Palomino is “more nutty, more luscious, it’s got a Meyer lemon peel  so it’s got that citrus kick.” And Furioso with East India is a “sweeter style of sherry and is finished off with a lemon peel and it’s darker.”

What I loved about this drink was not just getting choices but that it was also a really drinkable tequila cocktail. None of that bite you get from tequila and you could taste the cocktail starting from the back of your palate to the last tingle on the tip of your tongue. It definitely is for someone who can handle the more potent cocktails though. 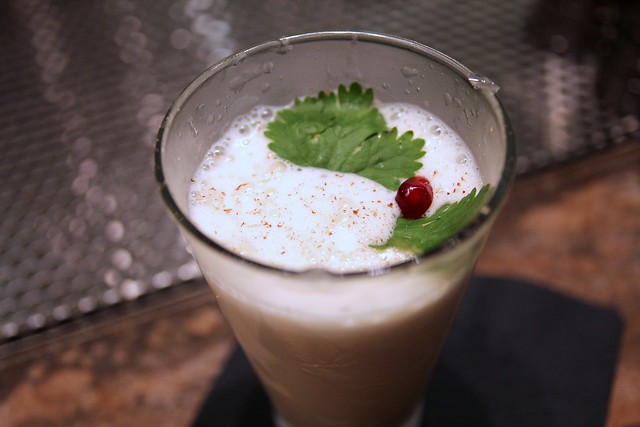 Ponche en Nogada, a lovely, festive nog-inspired cocktail, was created for an L.A. Times Magazine story (recipe here) and is based on the traditional Mexican dish, Chile en Nogada. Suffice it to say it tastes like Christmas by the fireplace. When I told that to Julian, he chuckled but it’s true. The creamy cocktail’s smokiness is thanks to its use of mescal, a very unusual choice for a holiday cocktail but I’m not complaining. Here it works perfectly, lifting that sticky, sweet stigma left by most nogs you may encounter this holiday season. But careful, it’s really easy going down.

The rest of the new menu is filled out by the cocktails that customers kept clamoring for to bring back. Hit the jump to see what made the cut. And if you don’t see a favorite of yours on the list, it’s because its ingredients are currently out of season. You know they only roll with the fresh stuff at Playa.

You can check out these cocktails for yourself tonight as they debut for the special price of $11. 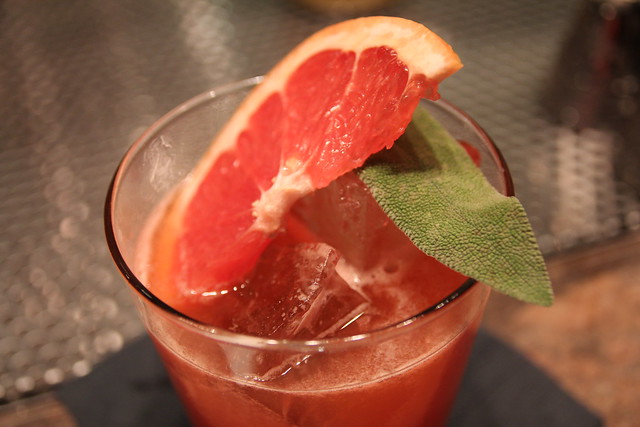 Nope, A Beer and a Ball is not a boilermaker cocktail. Rather, it is a bitter concoction that would be the perfect digestif. At least I thought it was bitter — what with the Campari, Aperol and grapefruit — but my cocktailing companion, bf, did not. It wasn’t over the top bitter thanks to the cane sugar and beer, though.