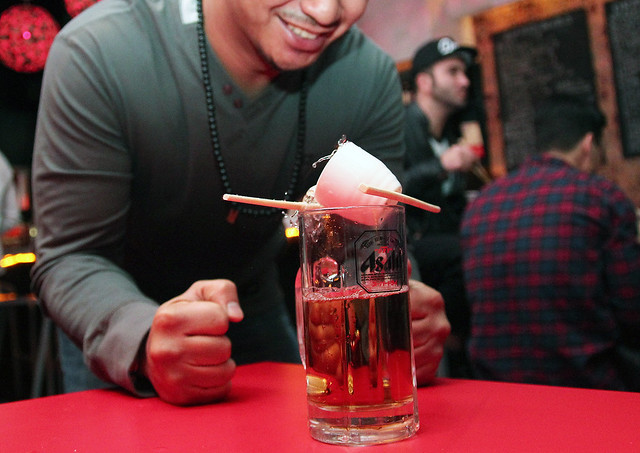 How hard could it be to do a Fuku Bomb, you ask? Fuku Burger‘s sake bomb is demonstrated here by the Asian burger joint’s own Chef Robert “Mags” Magsalin. The new Asian fusion burger joint, a takeoff on the uber popular food truck in Las Vegas, just opened up shop on Cahuenga Boulevard and is becoming popular for its unusual burgers which use ingredients like pickled red ginger, wasabi mayo and Furikake. But also its sake bomb is attracting some attention, especially from gangs of friends taking a break from bar hopping and nightclubbing in the area.

Here, the ever charming Chef Robert “Smell My Neck” Magsalin takes us through the steps of how to successfully complete a Fuku Bomb. Mind you, he did this five times so I could get a good shot. Such a trooper. 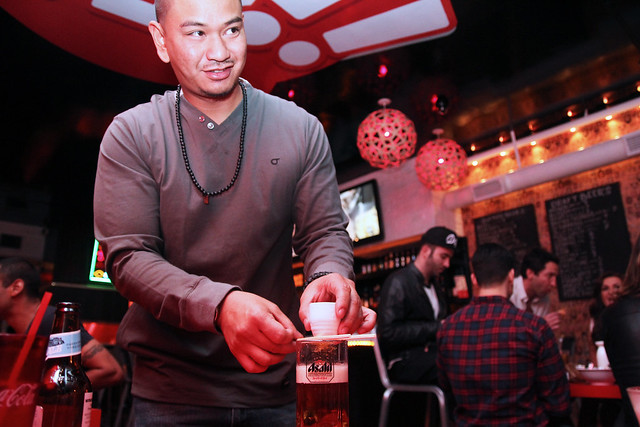 Step 1: Set the pint of beer on the table, not too close to the edge though. Lay the chopsticks across the top of the glass. Then set the shot glass of sake on the chopsticks. 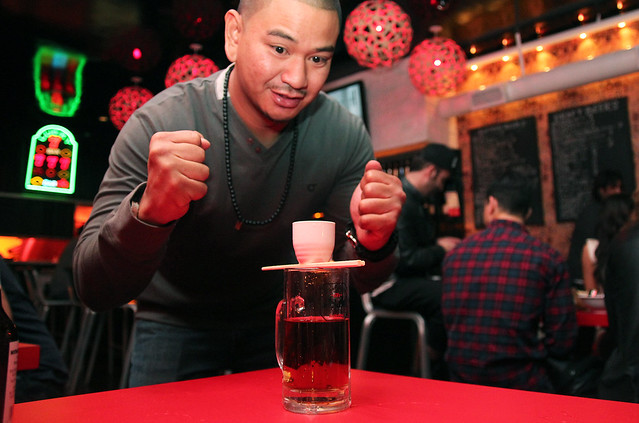 Step 2: Position yourself before the armed Fuku Bomb with fists at the ready in front of the glass. 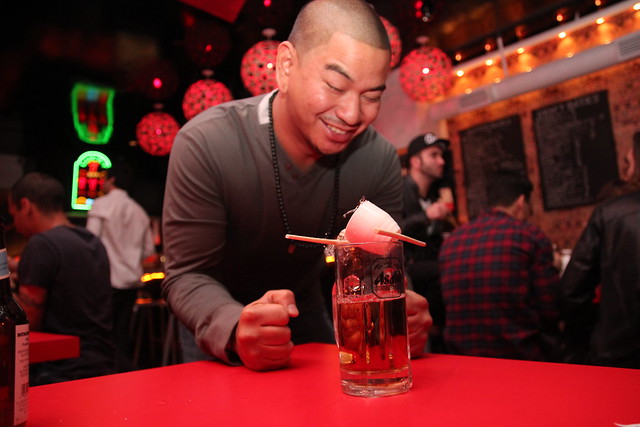 Step 3: Slam your fists down on the table so that it jolts the chopsticks into dropping the glass into the beer. Not too hard, you don't want to upset the glass. Just enough to topple the shot glass. Careful, there may be some spillage. 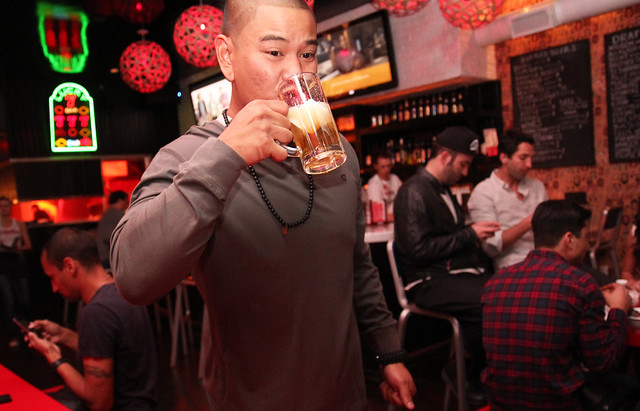 Step 4: Drink up. Popular way is to guzzle it down as fast as you can but to that I say, what's the hurry?

Good times. The restaurant has an OK beer menu from which to choose your brew to bomb, be it Firestone or Sapporo. But for straight beer drinking, let’s face it: Anywhere within walking distance of Blue Palms Brewhouse on Hollywood Boulevard just can’t compete. Still, not too shabby here. And figure in that happy hour is every day from 3 to 7pm with 2 for 1 beers, $1 Fuku-bombs and $1 sides and par-tay!

As for the burgers themselves, I was pleasantly surprised. I figured this whole Japanese-twist-on-a-burger thing was mere gimmick and that for sure the sandwiches would be overly sauce-y but fortunately I was wrong. At least the burger I tried during a hosted meal wasn’t bad at all. It was the uber popular #2 egg burger which is made with a free range Angus beef patty and Furikake, wasabi mayo and teriyaki and then topped with fried onion strings and a fried egg. The patty was tender and juicy, tasting fresh and of high-quality. And the sauces served to make me salivate like crazy while the onion strings provided a nice contrasting texture. It may not be a foodie favorite but it is perfectly awesome as guilty pleasure food.

If burgers aren’t your thing there are also items like the crispy panko-encrusted chicken sandwich and a deep-fried Naga Dog. But whatever you get, don’t forget to order up a side of Jazz fries, too, if you want to destroy your diet in a spectacular way. That stuff is crack. Garlic fries topped with brown gravy and, yes, “crack sauce.” Fortunately, not too salty but just enough where you can’t eat just one.

All in all, since the restaurant is open til 4am, it’s the perfect place to grab some after hours drunk food.

Tip: Fuku Burger is working on doing secret menu items like they do for their food truck. These will only available to those who follow their Twitter so keep an eye open for that.

More pictures of Fuku Burger after the jump.