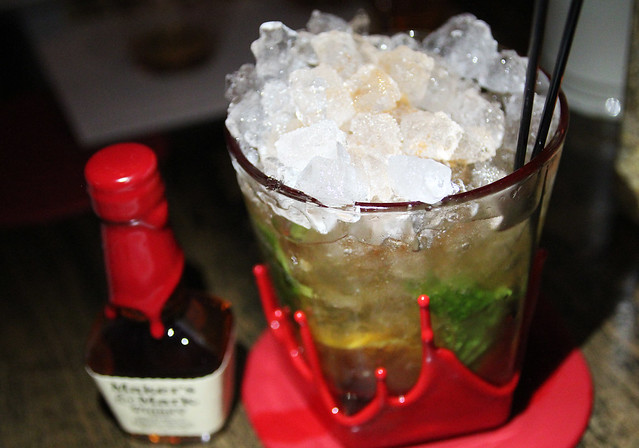 Earlier this week, I was invited to a lavish hosted bourbon-paired dinner by Maker’s Mark at modern Vietnamese restaurant Red Medicine in Beverly Hills. Two reasons why I couldn’t turn this down even after my self-imposed whiskey hiatus (following an over-indulgent night with Elijah Craig) and that scandal last year involving the ousting and outing of a noted restaurant reviewer which turned me off the restaurant: 1) It’s Maker’s Mark, one of my favorite bourbons, and 2) it’s a bourbon-paired dinner with something other than the usual steak and potatoes or barbecue.

And for this event chef/partner Jordan Kahn and that scandalous managing partner Noah Ellis specially created four cocktails they felt were in the spirit of Maker’s, which they then paired with a number of dishes. They used both the regular Maker’s as well as Maker’s 46, the company’s newest whiskey.  How could I turn all that down? 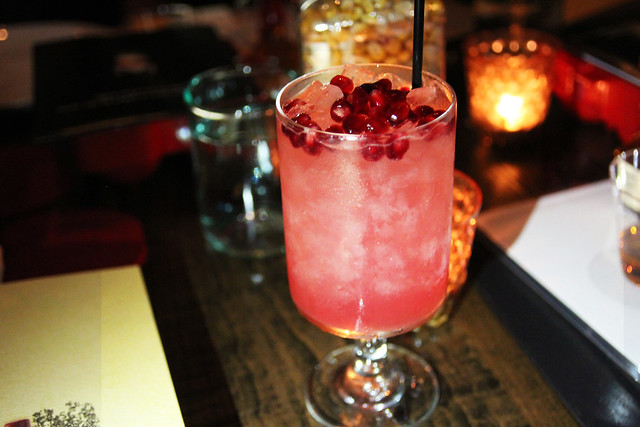 The first four courses were nibbles of pork rillette, delicious brussel sprouts in fish sauce, beef tartare and tomatoes so the first cocktail was light and effervescent. Noah and Jordan decided to go with a wintry, bourbon-y version of a Moscow Mule with pomegranate being the focus. The cocktail is made with Maker’s, housemade ginger beer, housemade grenadine (pomegranate juice and vanilla), lime juice and Angostura orange bitters.

“When we do drinks like this, we’ll carbonate everything together,” Noah said. “Because if you just take the bourbon and mix it with your ginger beer, sort of half of your drink would be flat and half would be carbonated. So we’ll take everything, we’ll let it sit for a few hours so the flavors can really mingle and then we’ll carbonate everything at 40 psi so the whole drink is a little more sparkling. And to cut it from there we’ll do it with crushed ice and pomegranate.” The result is the sparkliest cocktail I’ve ever had, almost like a cocktail soda. Brilliant.

A quick look at their online cocktail menu showed that they do indeed have a carbonated cocktail available (at least if the menu is up-to-date). The #58 (they don’t seem to bother with cocktail names here), which is described as an Argentinian Americano, is made with Jelinek Fernet, Cocchi Vermouth di Torino, Bulleit Rye, Mexican Coke and all carbonated together. I’m going to have to give that a try.

The next round of four dishes was heartier and more savory what with the likes of Imperial Wagyu beef brisket and heirloom rice porridge with onion soubise, young carrots, salted black bean and elderflower. So the duo did a take on the Mint Julep but with a tropical twist. Noah said he thinks tropical fruit when he thinks winter. So for their cocktail they used pineapple syrup instead of just regular sugar and brightened it up by muddling a grapefruit peel into each drink and then mixed in Maker’s Mark and Fee Brothers whiskey barrel-aged bitters for spiciness. 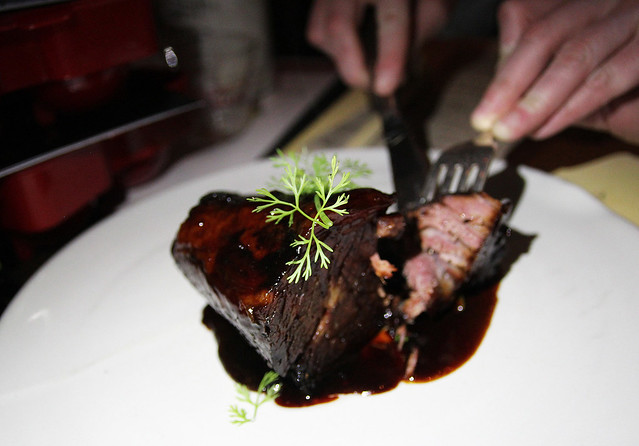 Surprisingly, the cocktail is easy to make at home, according to Noah, but the only tricky part may be the pineapple syrup. “But it’s not even that hard. We make ours sous vide so we take 2-to-1 pineapple pieces to sugar by weight and cryovac them and put them at 125 for 18 hours. But before I figured that out I was just doing it in a pot with water, pineapple and sugar and it totally works. The reason ours is kind of neat is that there’s no added water from the syrup. The only liquid is the sugar extracts from the pineapple. But if you do it with water, just use a little more, it’s not the end of the world. It’s a breeze at home.”

The sweetness of the cocktail did work well with the food, especially that oh-so-tender brisket that was braised with Maker’s. My only complaint is that I was expected to stretch this drink over four dishes. The crushed ice in it watered it down so it felt like a race against time to try to enjoy it before it got too diluted. I know, world’s smallest violin.

The last two dessert courses each came with their own cocktail. For the Coconut Bavarois with coffee, coconut milk, Thai basil, peanut and chicory, Noah paired a coconut eggnog made with Maker’s 46. “When I smelled the coconut dessert, I thought ‘the coconut and Maker’s 46 need to go together.’… So we take coconut milk and we cook it sous vide with eggs and sugar and cinnamon, clove, allspice and nutmeg and we make a custard. So it’s just coconut and egg and then we cut it with the Maker’s 46. Chilled it overnight to marry the flavors and then we froth it up with a handblender so it’ll be light.

“It might be a little bit of overkill with the coconut dessert but it was cold last night so the recipes that we grabbed were sort of these warm winter/fall…and the Maker’s 46 with the toasted French oak staves really calls for these flavors in particular,” said Noah. The result was a very light and not-too-rich eggnog, which I loved. Made me think of spending Christmas in Hawaii. And the cocktail wasn’t overkill with the coconut dessert, which was my favorite of the two by the way, but they just kind of blended together instead of actually complementing each other. 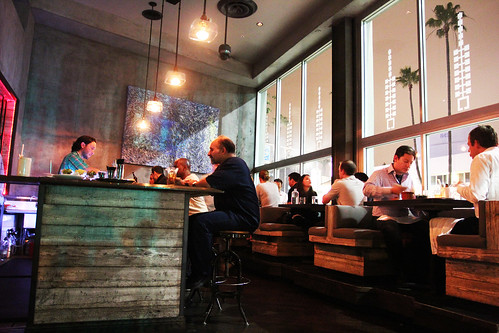 Nighthawks on Wilshire (thanks, @Mattatouille, for that one)

For the last cocktail and dessert pairing, they did a bourbon version of everyone’s favorite winter cocktail, hot buttered rum with a dessert of bitter chocolate, kecap manis, oats, parsnip, brown butter and soy milk sorbet. Naturally here the Hot Buttered Bourbon was gourmet-ed out with butter from the south of France and garnished with sea salt from England in addition to mixing in Maker’s 46, hot water, nutmeg and sugar. As it cooled, it became richer and butterscotchy. Very decadent.

Fortunately, even though these cocktails were made especially for this dinner, Noah said they’re looking to add the Hot Buttered Bourbon to the cocktail menu in the next month. Perfect for those 50-degree nights! Heh.

So I think I made my peace with Red Medicine (and whiskey). I may not go there for dinner (too lah-dee-dah for my cheapskate tastes) but I’d love to make a habit of stopping by for a late night cocktail and bar snack. They’re open til 2am and have a great bar area. In this sleepy part of Wilshire Boulevard, it seems like a well-known hidden gem.

On a side note, after this dinner I went home and fixed myself a Maker’s Manhattan. I’m cured!

More pictures of the Maker’s Mark dinner after the jump.