I Won My Very Own Leblon Cachaça Bartender for the Day 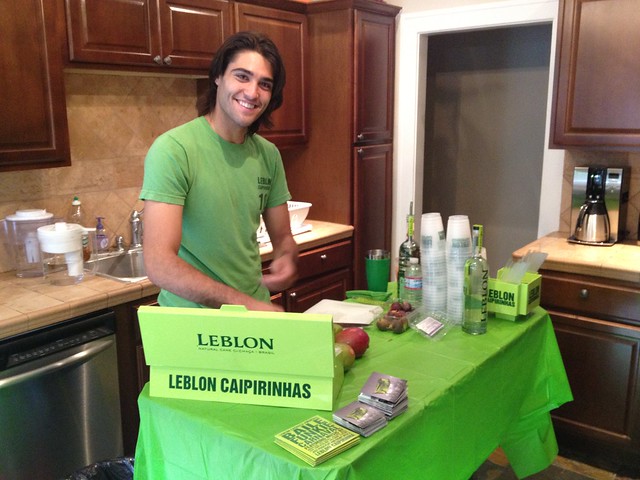 Lookie what I won!

I’ve always wanted to throw a cocktail party where I had my very own bartender for the evening. I wouldn’t have to worry about my guests going thirsty (read: sober) and it would just make things extra class-ay. But when I won Liquor.com/Leblon Cachaça‘s Win Your Own Caipirinha Party where I scored my own caipirinha-making bartender for two hours, I had only invited about 10 people. Primarily because I was told that I could only invite up to 10 people. Yeah, wuuut?

So I invited a group of friends who I KNEW could put it away: my food blogging friends. Hey, bloggers can draaank! Anyway, Busy Beth, EstarLA, LA/OC Foodie, Mattatouille, Squashblossom as well as a couple of civilians (shout out to Dre and Joanne) showed up at my place Sunday at 2pm. 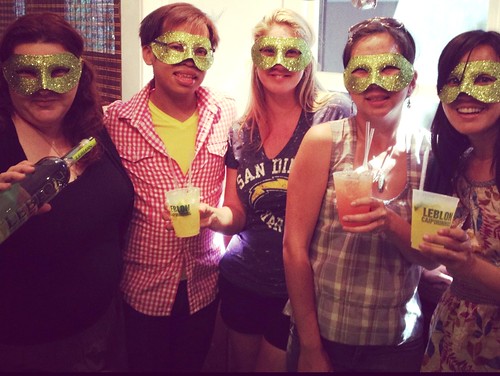 Our bartender du jour, a handsome young fella named Jayson Carvalho had already set up a bar in my kitchen, complete with an ingredients caddy of mangos, figs and limes as well as CDs of Brazilian music, green glittery masks and recipe pamphlets for the guests.

I felt bad that he had such a great layout and only eight people to make drinks for. “Yeah, usually people invite 20 or so to these things,” he said. “Wuuut?! I could have invited more people?” I replied, kicking myself when I realized I could have scheduled a Brazilian-themed Halloween or housewarming party around this. Bah! But then I got over it. It was nice having an intimate cocktail party with my friends.

We hung out in the kitchen with Jayson while he made us a variety of Caipirinhas — mango, fig, mango-fig, and traditional. He said he could also make mojitos but we stuck to the Caipirinhas. And boy, did we keep that guy busy. Even with just the eight of us, he was making drinks nonstop, save for one little lull as we took a collective deep breath and dove in again. I was just happy that we were drinking at my place. Heh.

In any case, all the cocktails were pretty good, a tad sweeter than I usually prefer but perfect for a Sunday afternoon. The group’s standout favorite was the Fig Newton Caipirinha. Mm, figs! It was a little sweeter than the mangos but then again the mangos, Jayson admitted, weren’t all that ripe. What’s perfect is that these are so easy to make at home. 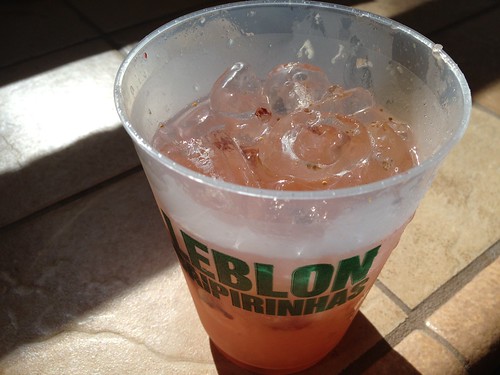 The fave of the day: Fig Caipirinha

Muddle fig with simple syrup and shake all ingredients over ice. Top with ginger ale and served on the rocks. Easy peasy!

In case you wondered just what is Cachaça (kuh-sha-suh), it’s been classified by the U.S. as a Brazilian rum but it’s really its own thing. Where rum is made from molasses, Cachaça is made from fresh sugar cane. So there’s this “Legalize Cachaça” movement to get the spirit’s identity recognized instead of lumped together with rum.

Thanks again, Leblon Cachaça for Jayson and his nommy Caipirinhas! Now I can’t ever throw a party without having my own bartender. Can he live in my kitchen? Please?

Hey out there, if you had your own Leblon Cachaça bartender, what kind of party would you have thrown?