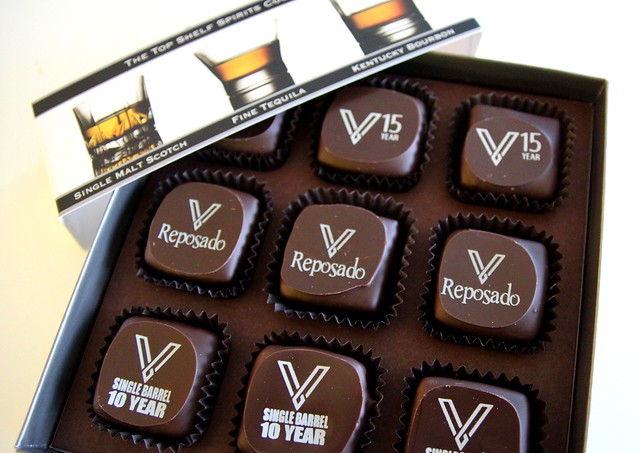 Hmm, which to have first?

Twice the Vice Spirited Chocolates, a chocolate company that just started last year in Santa Monica, has got my number. Belgian chocolates with a rich chocolate ganache infused with high-end liquor. Yes and oh yes! They’ve been touted by UrbanDaddy and Food Republic as the box of chocolates for men of taste but I say they work just fine for cocktail geeks of the female persuasion as well. 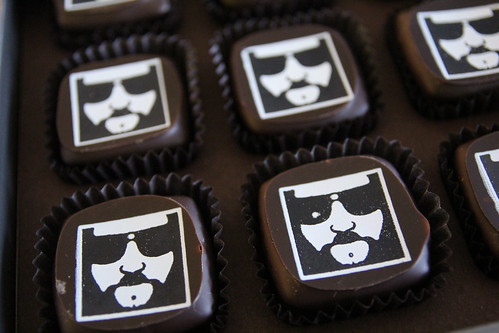 For serious, browse the selection online: single-malt, Kentucky bourbon, fine tequila or go for an assorted box of top-shelf spirits or classic cocktails.

But before you get all giddy and place your order, keep in mind that due to the extreme booziness of the chocolates, it’s currently illegal in 42 states! So only the following states can (legally) get ’em: Arizona, California (yay!), Colorado, Hawaii, Kentucky, Louisiana, Missouri and Washington. But owner Craig Boreth says, “They have about as much alcohol by volume as a strong beer.  So, you’d probably suffer cocoa-butter induced seizures before getting a buzz.”

After scoring boxes of the Top-Shelf and Helluva Caucasian collections to sample, I’d say they’re almost worth getting in trouble for, especially that White Russian which makes me crave the real thing. But don’t take my word for it, I shared the chocolates with my co-workers, Mattatouille and my bf to get varying opinions on them as well.

Here are some soundbites of our taste test with Mark (a bon vivant), Bryn (a foodie mom), Mike (a junior bon vivant), Mattatouile (respected food blogger) and my boyfriend (a man of exceptional taste):

Conclusion: All the taste testers agreed that they’d gladly pay $28 for a nine-piece box of these chocolates, especially favorites the Big Lebowski-inspired collection and the Eagle Rare bourbon, which actually isn’t available in a box. They do, however, have a Kentucky Bourbon one available which features Elijah Craig 18, Knob Creek 9 and Woodford Reserve Mint Julep. Yum!

All also said they can see enjoying the bourbon and scotch chocolates while sipping the liquid counterparts. As for the chocolate vehicle for the boozy ganache, all agreed it a smooth, rich and high-quality conveyance.