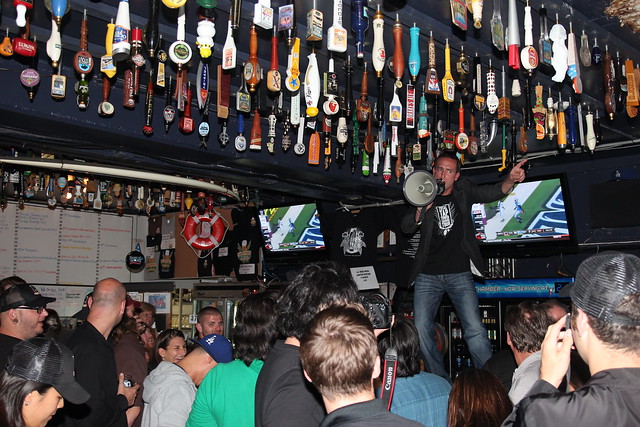 And so after a brief speech over a bullhorn calling for the end of yellow, fizzy beer followed by a stage dive and some crowdsurfing, Stone Brewing Co.’s owner Greg Koch lead the “revolution” against corporate beer and effectively kicked off the 3rd Annual LA Beer Week last night at Redondo Beach’s Naja’s Place. Weeee! (video) 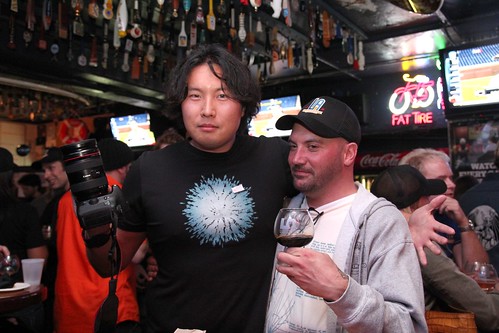 The crowd was buzzing but never got out of hand as you’d expect in any huge drinking event. The beer, provided by Stone Brewing Co., kept flowing and there was never a long wait for a refill. All in all a very well-run event, helped by the fact it was broken into two sessions with one starting at 3 and the other starting at 8. I went to the later one where I was able to run into good friends Stan of Drink Eat Travel, professor/food writer Gevork Kazanchyan, and Josh of Food GPS as well as beer guys Matt Olesh of Blue Palms Brewhouse, Clay Harding of 38 Degrees and Ryan Sweeney of Surly Goat and Verdugo Bar.

Speaking of Ryan, he told me that regarding his new Belgian beer bar, Little Bear, which took over the old Royal Clayton’s spot downtown, there is no set opening date for it yet. At least not in the near future. But, still, with L.A.’s first certified cicerone in charge of the taps, you know it’s going to be gooood so I’m keeping my ears and eyes open for this one. 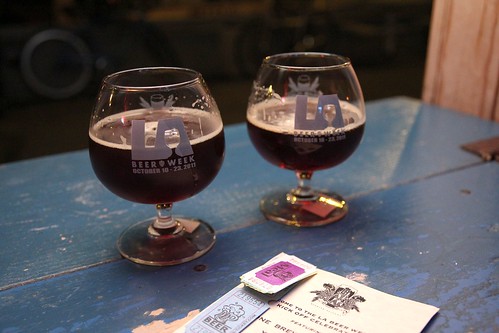 But back to the beer, since each admission was given 10 tasting tickets and there were 40-plus beers to choose from including some vintage picks, I chose carefully. However,  I was still recovering from my weekend eating tour of Tijuana so couldn’t imbibe as much as I would have liked. I therefore agreed to be the DD to my boyfriend who gladly indulged in the generous 6-ounce pours.

Of the beers we tried, our absolute favorite was the 10th Anniversary IPA which was like a honeyed barleywine. I so wanted to marry this beer. It was brought out in a large bottle with the bartender saying it was worth a green ticket (vintage pours) or two blue ones. A sign that this was the good stuff.

I also had a bit of the Arrogant Bastard with coconut flakes, which actually isn’t as odd as it sounds as the coconut just popped up on the finish and blended nicely into the lingering hoppiness of the beer. Stone’s collaboration Special Holiday Ale — a collaboration beer with Stone Brewing Co, Jolly Pumpkin and Norwegian brewery Nogne Ø — tasted of winter with its malty but holiday spice flavors. Everything was so delicious. But sadly, there was no way I could finish every drop of the 6-ounce pours and ended the party well-sated.

If Naja’s Place’s kickoff party is a portent of what to expect for the next 13 days of LA Beer Week, I’d say there’s lots to get excited about. Great beer, fun beer people and good times ahead.