Neat Bar by Aidan Demarest in Glendale: No Cocktails, No Waiting + Q&A Outtakes 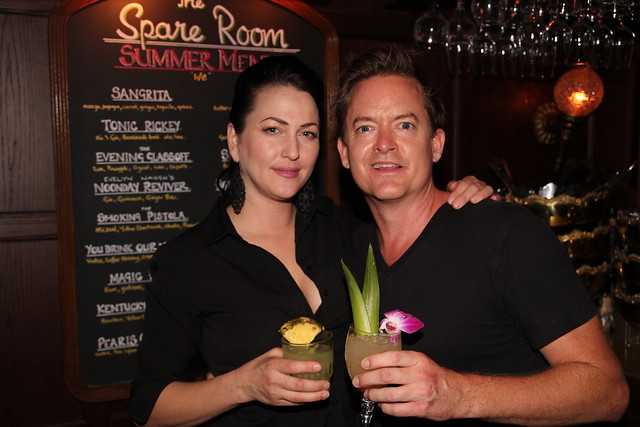 A new bar but without a specialty cocktail menu? Unheard of! Especially in this day and age of hot L.A. mixologists and must-do cocktails. But Aidan Demarest — well-known bar guy who’s managed places like the Edison, Schmeven Schmand and the Roosevelt’s Spare Room — told me for an interview I did with him for LA Weekly‘s Squid Ink that he’s done talking about cocktails. So for his brand-new Neat bar, which opens up in Glendale on October 8, he’s focusing on spirits.

No well-crafted cocktail menu, except on the occasional guest bartender night, just “deconstructed” drinks arriving on pallets: spirit served neat alongside a glass of mixers. Think vodka with a side of ginger beer and lime for a Moscow Mule. No stemware here, just rocks glasses.

And the venue, which takes the place of ol’ beer bar Side Bar, will strip away all the Moroccan filigree down to the bar’s original mid-century foundation. A simple bar and a simple menu. Aidan wants to return it to its straight-drinking roots. Here are a couple of outtakes from my interview with him.

I don’t want to build it up too much because it’s not as interesting and it’s certainly the tiniest remodel I’ve ever done but the remodel of this place, the decor, it’s a mid-century bar. It’s built in the ‘50s. It’s a mid-century Glendale bar. Underneath [the old Moroccan decor] is this great Post- World War II bar that I’m sure every car salesman and cop in Glendale hung out at and had a beer right before he went home. That’s what I loved about it. It reminded me of a Boston local. And you could tell the emphasis was on the bar. It was really a bar. I’m bringing it back to a bar and it already is so awesome to watch.

The only big difference we did was create this shrine to liquor. There’s going to be 30 feet of liquor that run the length of the bar. It’s 3,500 square feet. It’s not that big at all but it’s all you need. There’s a lot of space in a bar that is superfluous. This is a bar and tables and chairs and there are two booths in front that are great. And he has a dj thing. I’m going to do some entertainment. There’s a cabaret license so there’s going to be djs and bands. It’s not a speakeasy, it’s a bar.

My fave part of the interview with Aidan was to hear him talk about the distillers, who will also be showcased at Neat bar:

Watching that process has always fascinated me because I know how much work it is. And those guys, those distillers and the master distillers they can taste a sunny afternoon in 1975. I swear to god, they’re amazing. I had such admiration for that when I first got into this business and I met some of those guys. And they’d be like, ‘Here’s why I do this…and it’s on this side of the rickhouse because there’s an open window over there that got busted out in World War II, we never fixed it so the breeze blows right in and out and I always use that barrel when I wanna soften up the last..’ literally. You’re like, ‘Whhhat?’ There’s like 8,000 barrels in there and the guy is like, ‘The one by the window over there is softer.’ No really. That’s a true story. We’re talking about a place that’s as big as a mall and he’s like, ‘I told them never to fix that window ‘cause it just does so well. We’d have squirrels get through it though.’ That’s amazing and all that goes into a glass or a bottle, unknown to anyone.

Neat will have a private industry opening on October 7 but will open its doors to the public on October 8. Can’t wait!