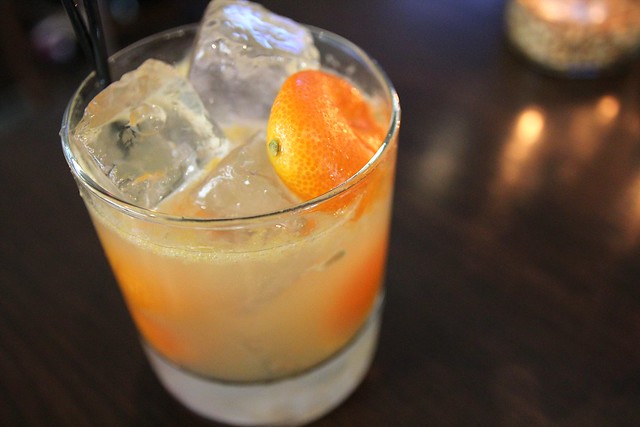 After the way my uber-indulgent Day One in San Francisco went, I was in Ziggy Piggy heaven. Eating and drinking without remorse. Thoughts of diets and exercise could wait til I got back in L.A. For now, every craving was sated, food babies be damned.

Fortunate considering my two favorite bar/restaurants of the whole trip were still to come in my Day 2 and 3. 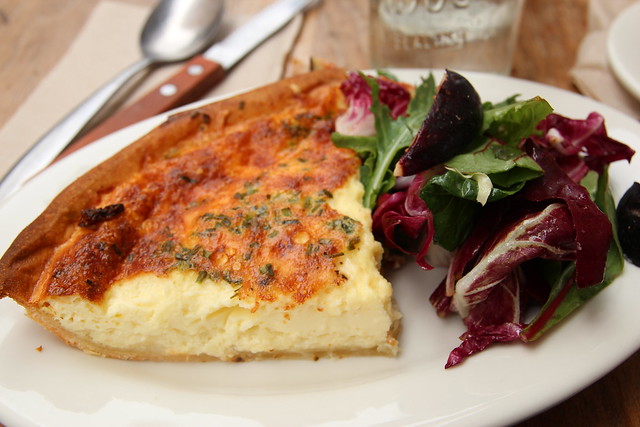 My bff and SF guide, Jennifer, took me through skurry Tenderloin to get to this appropriately named brunch spot which boasts dishes made with ingredients straight from the farm and/or farmers market. After passing by a couple of corner drug deals and two guys peeing on the sidewalk of a busy street (not even an alley!) I was a bit annoyed by the time we got to the teeny eatery since I was afraid someone was going to mug me for my DSLR, my Precioussss.

For Jennifer, this walk through the neighborhood was just a part of her everyday life since she works at City Hall and usually walks through the Tenderloin for lunch. But I can’t say the same for myself. In L.A. I just drive through the sketchy areas, windows up.

I was even more annoyed that Farm:Table only took cash, didn’t have enough seating indoors (we had to eat at the sidewalk cafe tables) and didn’t really have any breakfast-y dishes. So I went with the closest breakfast thing I could find off its meager menu: a quiche with a side salad topped with figs. The figs were a nice touch to an otherwise basic salad. And the quiche was fresh, fluffy and simple. Unfortunately my latte with homemade almond milk (they don’t have soy) was not all that great, kinda watery. But I’m not accustomed to almond milk so if that’s how you usually take your coffee you might feel differently.

Although I wouldn’t trek through the Tenderloin again to get here, I did enjoy the warmth of the employees. They were so friendly and when they asked us how we were doing, it felt like they genuinely cared about our answer. Their enthusiastic recommendations were also based on experience from having enjoyed the food themselves and not just upselling. It turned what could have been just a small hole in the wall into something like a friend’s kitchen nook.

Jasper’s Corner Tap in the Tenderloin 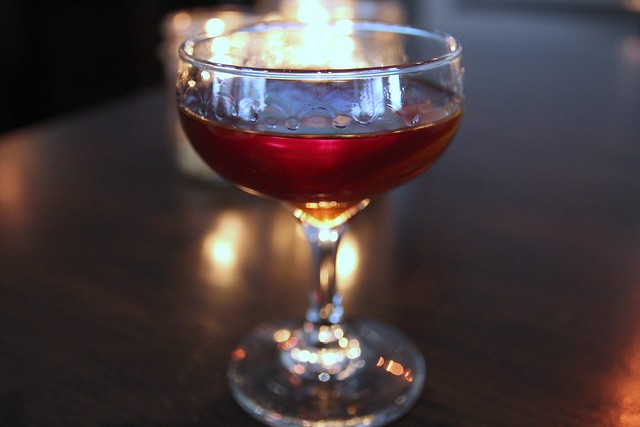 After catching the latest Ryan Gosling movie (hey, girl) at the Metreon in SoMa, Jen and I headed over to Jasper’s Corner Tap for linner. I had read that the Burritt Room’s bar star Kevin Diedrich (Cask, PDT)  abruptly left the hotel bar to head up the bar at the Tenderloin/Union Square restaurant. Buzz from San Francisco cocktail bloggers gushed over his beer cocktails and “lush yet delicate drinks.” How hard-core is Jasper’s (named after Jasper O’Farrell, one of San Francisco’s first surveyors) about its cocktails? They even had Negroni on tap!

At around 5pm on a Saturday, the restaurant was quiet. Thank goodness because I figured for sure a place like this would be packing them in. We grabbed a booth near the bar; the better to keep my eye on the cocktail making. The cocktail menu itself, enclosed in a small green binder, was extensive, offering not only the list of ingredients in each drink but a little history lesson as well. For example didja know that the Improved Manhattan was the result of Kevin Diedrich combing two of his favorite cocktails — the Manhattan and the Improved Whiskey cocktail? I loves learning while cocktailing.

Even though I’ve been on an indefinite hiatus from whiskey — thanks to one fateful night with an open Elijah Craig bar at Hemingway’s — I decided to try and jump back into Manhattans with this Improved one. Made with Wild Turkey rye, house sweet Vermouth, maraschino, Angostura bitters and absinthe, it sounded risky but then I remembered how much I used to love Manhattans and Sazeracs (I’ve never had an Improved Whiskey cocktail before).

Unfortunately, after one sip memories of my Elijah Craig-overdose came erping back. I couldn’t make my way through the drink. The server came back to our table and saw the unfinished cocktail. “You didn’t like it?” he asked, dismayed. I told him why and had another cocktail order at the ready: a Harlot’s Progress (top photo) made with Bols Genever, honey, kumquats, lemon and St. George absinthe. Served over ice and sweetened with fresh kumquats and honey. Gawd, I love that mix of the malty genever with a hint of anise.

Next cocktail up was the Shibuya Shake, a damn refreshing gin cocktail with Beefeater, St. Germain, lemon, grapefruit, orange bitters, egg white, Shiso and, yes, Squirt. Here’s the recipe for you to try at home if you can’t make it up to SF. 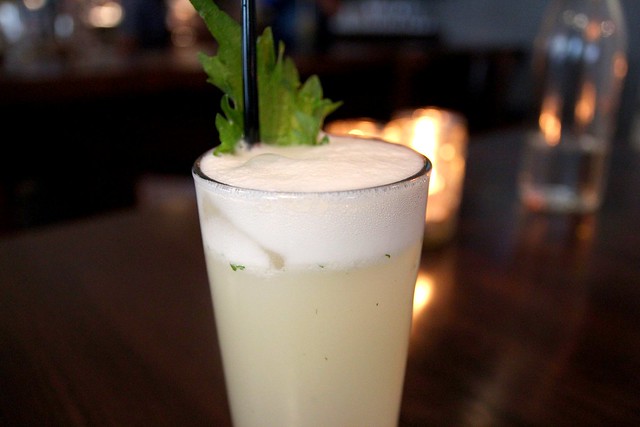 Now if you prefer beer to cocktails, Jasper’s has an extensive beer menu with beer like Firestone Walker DBA and La Chouffe Golden Ale, as well as bottled beers Dogfish Head Midas Touch and Maredsous Tripel. And if you like both beer and cocktails, there’s specialty beer cocktails like the Belgium Sucker Punch with Duvel, Plymouth gin and lemon.

Food here should not be dismissed as the usual bar food, especially when a lot of it is made on the premises and you don’t feel the need to sop the oil off everything with a paper napkin first.  Since Jennifer and I were sharing everything we didn’t order any entrees. Wins were the calamari — although a a bit salty, its breading was crispy and not greasy, the side of mac and cheese, and the grain salad made with Anson Mills farro verde.

And the stone fruit crumble was one of the best desserts I’ve had in awhile thanks to its Maker’s Mark ice cream which actually tasted like it had the potency of the bourbon, a nice contrast to the pussyfooted child-safe subtlety you find in bourbon ice cream from artisanal ice cream shops. “I think I’m actually getting a buzz from this,” Jennifer said. Now this is the perfect way for me to ease  myself back on the brown stuff.

Monk’s Kettle in the Mission 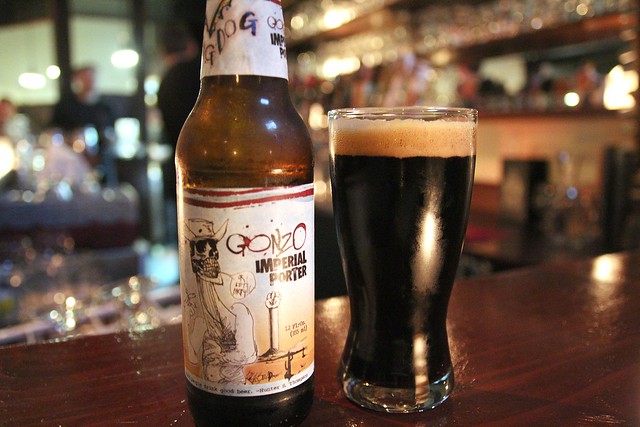 Monk’s Kettle, listed as Best Beer List on 7×7’s 2010 Eat+Drink Reader’s Choice Awards and #50 on its “100 Things To Try Before You Die,” was the only eatery we went to twice during my visit. It was that beer list that kept me coming back. That and the food and the service.

Jennifer and I had split an order of the scallops and bacon-wrapped apples and I expressed to the bartender my disappointment that the scallops weren’t the ones wrapped in bacon. And then he delivered a plate plentiful with beautiful, thick pieces of bacon to us. Now how above and beyond was that? So nice. I especially loved it with my Gonzo Imperial Porter. Mmm, its malty, chocolatey and coffee flavors go so well with that bacon-y goodness. 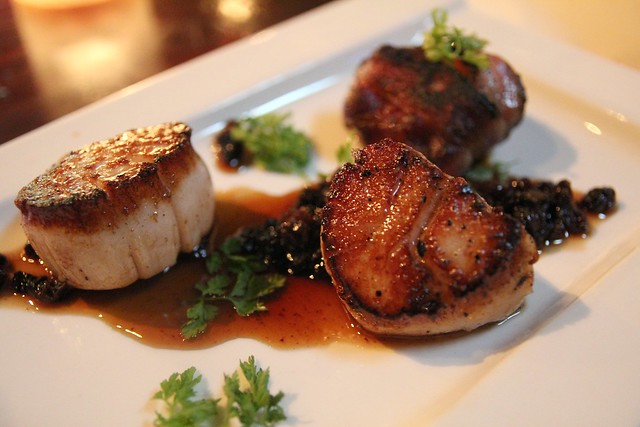 Last December, Kevin Kroger, the chef who was with Monk’s Kettle since its opening, left and was replaced by Adam Duyle. This change upset a few people who mourned the loss of, apparently, some awesome mac & cheese. Shoot, I’d be sad, too, if I knew what it tasted like. Fortunately, the tender scallops weren’t a bad way to go. And the scrumptious albeit messy spent grain and chickpea burger we had the next day for lunch made me forget that I ever missed beef burgers.

I loved Monk’s Kettle at night and in the day. I loved it so much I even bought one of their T-shirts ($25). And apparently, SF loves it, too, enough for the owners to open up a 100-seat craft beer restaurant called Abbot’s Cellar sometime this winter. 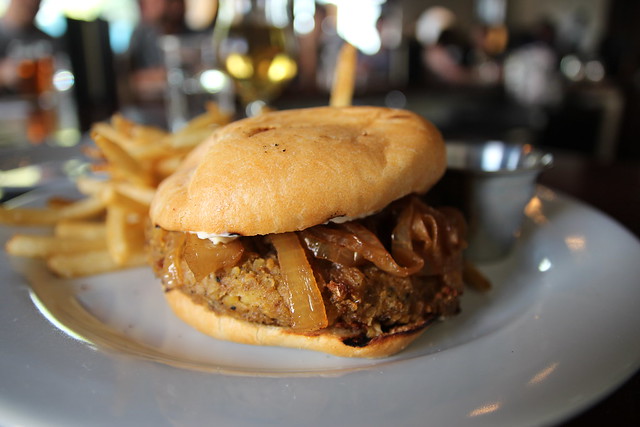 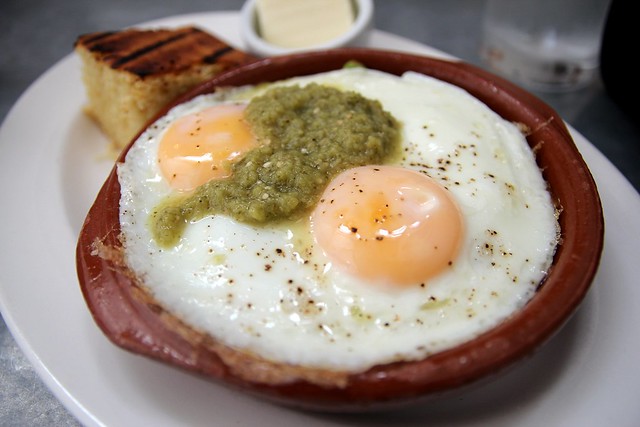 For my last brunch in San Francisco, Jennifer wanted to take me to Plow in Portrero Hill but since the wait was a ridiculous hour and a half and we were starving we just made our way to Serpentine which got great reviews for its brunch anyway. Plus, there wasn’t a crazy wait. We just walked in the restaurant, which incidentally is across the street from Mr. and Mrs. Miscellaneous in Dogpatch, and were immediately seated. Sure, they seated us in this tight corner near the front door with no view of the dining room but at least we got to eat soon.

Unfortunately our waiter wasn’t all that attentive so it took awhile to get our orders in and then he came back because he had forgotten what I had ordered. “I’d like the veg-friendly baked eggs with summer squash and cranberry beans, good sir,” I reminded him.

Initially I was worried that the baked eggs’ small portion in the gratin dish wouldn’t be satisfying enough, even with the cornbread that came with it. But fortunately it all was hearty stuff. The cranberry beans and squash filled me up while the sunnyside-up eggs satisfied my craving for something savory. I nom’d through the dish so quickly. The cornbread wasn’t exactly the best I ever had though. Since it’s just a side, most people probably wouldn’t care but I was so looking forward to it, especially since it’s the rare occasion when I allow myself to use butter.

The prices for the brunch items were surprisingly affordable considering the setting. Walking into the airy dining room with its high ceilings and seemingly well-to-do clientele in their relaxed Sunday best, I’d figure dishes would range from $15 to $20 but instead it was $8.50 to $14.

We got a fancy linen brunch for not-so fancy prices.

Bi-Rite Creamery in the Mission 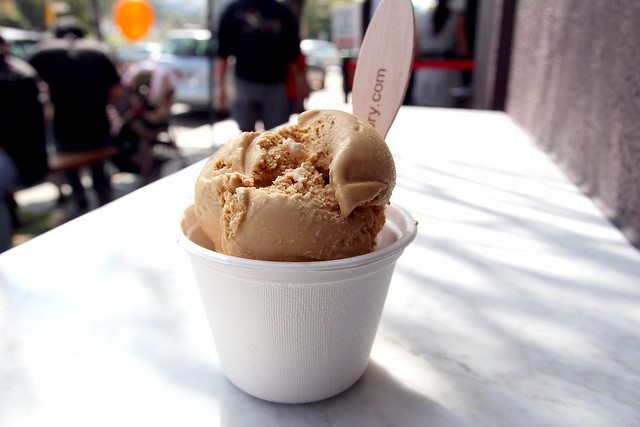 I’ve had Bi-Rite before but it’s been awhile and since it’s been touted as “the best ice cream in town” it warranted another visit. So we stopped by right before Jennifer had to drop me off at the airport. But since it was a holiday weekend and the day was sunny and warmish, the line for ice cream at this Mission ice cream shop went up the street and around the block. I was skeptical about whether we’d have enough time to get ice cream and still get to SFO in time for my flight. But Bi-Rite’s salted caramel flavor beckoned to me from tips in the Foursquare check-in, from the menu outside and from the happy customers walking out of the shop with their piled-high cones. Arrgh!

So I waited. And waited. Perusing the menu and killing time trying to think of what other flavor would go well with the salted caramel. Hmm, toasted banana would make a great bananas foster combo and Brown Sugar with Ginger Caramel Swirl sounded intriguing. But in the end I decided to go with Coffee Toffee, my two fave flavors in one!

Surprisingly I found the salted caramel just OK. It was a bit too salty for me. Not that I hated it and maybe I just built it up in my head. But I couldn’t help but think how wonderful it would be if it kept the sweet of the caramel ice cream and they added a pinch of sea salt with the serving the way Matt at Scoops Westside in Palms sometimes does it. Heh, yeah, I’m spoiled. But that way you could control how much salt you got.

In any case, I didn’t regret the wait in line. Totally worth it. However, if you encounter the line and don’t feel like waiting, just FYI there’s no line for the Bi-Rite soft serve just next door. The soft-serve window is open every day from 1-10pm.