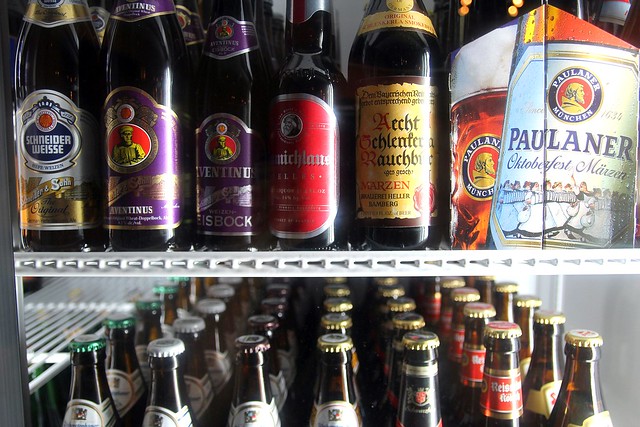 Don't be scared. It's just beer.

Sunset Beer Company is finally opening up in Echo Park tomorrow at noon! It’s been a long time coming for many local beer fans who have kept vigil on the store’s Facebook page for any grand opening news. And sure, the store got scooped by the Beer Chicks’ 8th Street Bottle Shop for being the first all-beer store in Los Angeles but who cares? There’s room for everyone in this town especially when a carefully curated, extensive selection of craft beer is involved.

Sunset Beer Co arose from a need to accommodate the growing popularity of beer at owners Jennifer and John Nugent’s Colorado Wine Company in Eagle Rock. They love beer, their customers love beer but they only had a small refrigerator which couldn’t possibly contain all that beer love. So the Nugents teamed up with Drew and Jenna Miller-Von Ah to open up Sunset Beer Company. Why in Echo Park? Because the neighborhood “seemed like the epicenter of the beer movement,” said Jennifer. “I love the fact that Mohawk Bend is here. It makes it a destination about beer. At least as much as music or food.” 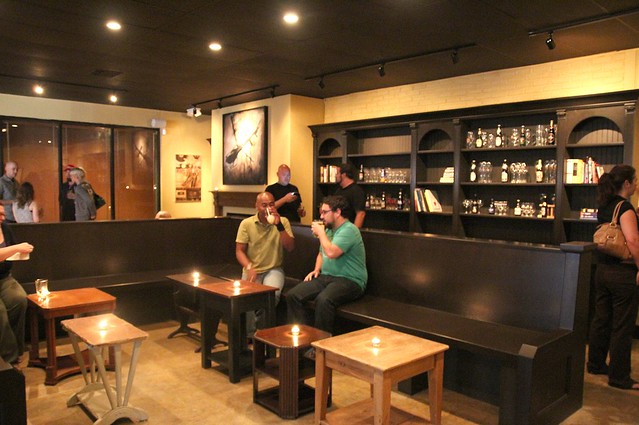 Grab a beer and stay awhile.

Sunset Beer Co’s beer list itself was put together by Alex Macy, former beer guy of City Sip and BottleRock Downtown. His philosophy for picking the beers is simply “If I don’t want to drink it, we’re not going to carry it.” Fair enough. But does that mean all the beers here will go over the heads of most newbies and mainstream beer drinkers? Not necessarily. There’s something for everyone. And if you feel overwhelmed by all the German labels, the employees at Sunset Beer Co will be happy to help. And, most importantly, you won’t get pooh-poohed for liking Olympia or PBR.

What’s in the Fridge

The space at Sunset Beer Company is divided into the main store with a wall of refrigerators teeming with beer bottles and the bar/lounge area in the second half. 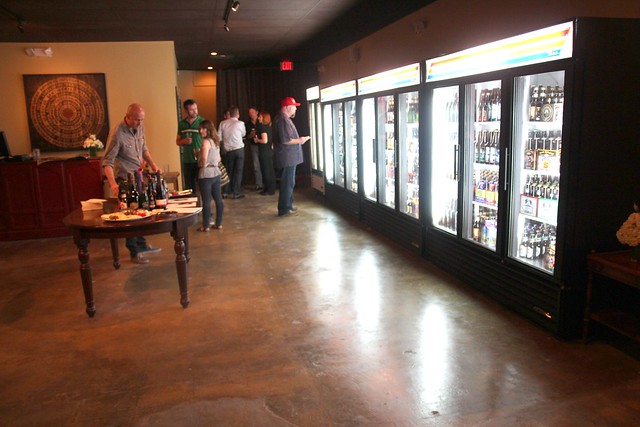 Currently the store’s fridge is lit by fluorescent lights (with UV filters) but Alex said they’re looking to one day have LED lights which will be better for the beer. The bottles are arranged by German/Belgian imports, non-German/non-Belgian imports, non-California domestics and California domestics but Alex said that that will change, “it will always change.” No matter, though, as I just liked walking back and forth salivating and admiring all the pretty bottles.

Fortunately for beer lovers on a budget, everything is priced competitively, “not trying to undercut but also trying to be in the same range,” says Alex. “I don’t want people to come in and say, ‘You’re really expensive,’ because we don’t want to be.” As for the taps at the bar, he said his goal is to keep things under $6. 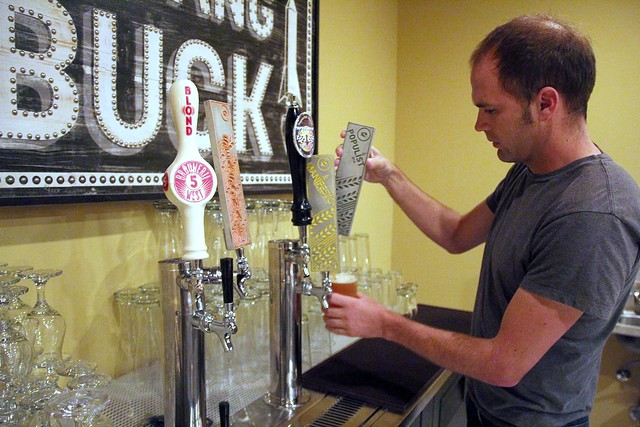 Will White Trash Tastings Fit in the Bar?

Last night at a sneak preview party of the shop, I got to enjoy a couple of beers (Alesmith Speedway Stout and Telegraph California Ale) from the bar area in the back where there also is a lounge of hard wood chairs and low tables. The bar only has six taps and no immediate plans to put in more since the bottle selection is so huge. As it is, you can just grab a bottle and enjoy it in the lounge. Sweet!

However I know the real question on everyone’s mind is will CoWineCo’s famous White Trash tastings make their way to the beer store? Well, Jennifer said that she thinks Alex, manager of the store, wants to do “high-end, hoity-toity amazing food pairings with guest chefs, special food events and maybe some food trucks as well. But maybe we can talk to him about White Trash.” So keep hope alive!

By the way, you’ll be happy to know that the store has a parking lot so none of this having to find street parking on very busy Sunset Boulevard.

Opens Saturday 12pm to 11pm. (Store will be open for a few hours today, though.)

More photos of the Sunset Beer Company sneak peek party after the jump.