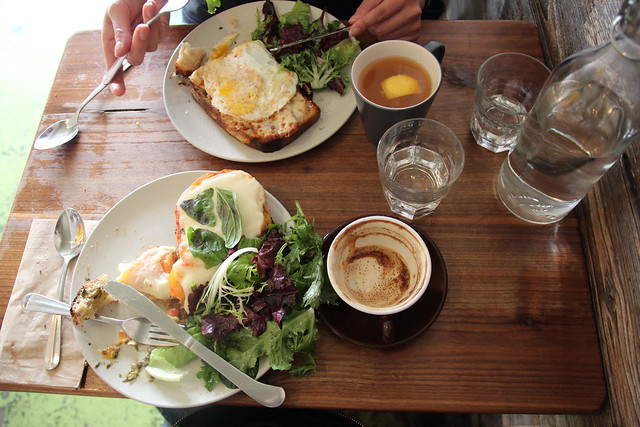 Brunch at Outerlands in Outer Sunset.

Since I grew up in NorCal I feel like I’m past the point of being a tourist in San Francisco, preferring beloved local eateries in SoMa to tourist traps in Fisherman’s Wharf. So this past Labor Day weekend when I went to visit my bff Jennifer she had carefully researched a list of local favorites by scourin publications like 7×7 and SF Weekly‘s SFoodie (I’ve added the review links to the respective restaurants). ****

Our food journey took us around SoMa, Dogpatch and, yes, the Tenderloin. Here’s basically everything I ate and drank around the city, divided into two parts cuz it’s THAT much stuff to cover. So if you find yourself in the Bay Area and are looking for some suggestions, have I got a bunch for you.

Outerlands in the Outer Sunset District 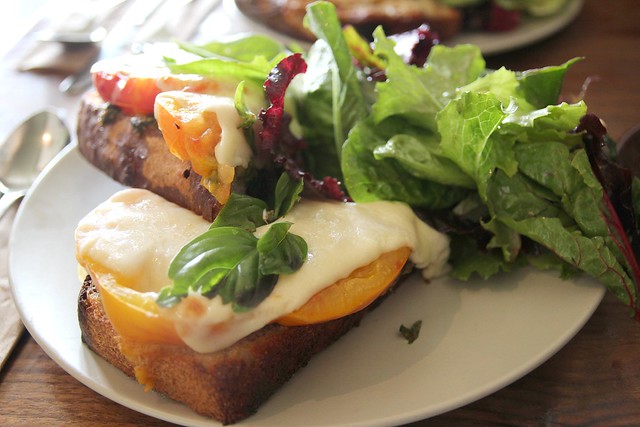 Since Jennifer is a really late riser we always had to skip over breakfast straight to lunch. Outerlands, she said, always had a popular lunch with a line down the street. And since it was Friday, we were able to snag a table before the lunch rush.

Since the beach in SF is not exactly the bikinis-and-flipflops haven it is in Santa Monica, a cozy place like Outerlands is a welcome respite from the gloomy seaside. And with its salvaged wood walls and hanging plants, pourover Sightglass coffee and hot cocktails, it is. Of course the day we went it was an unusually sunny day in SF but that didn’t diminish its cozy charm. The interior of the eatery reminded me of a log cabin but in a good way.

The server and cashier were smiley and eager to help us, instructing us to first place our orders and then grab a nearby seat. As I looked over the menu I couldn’t help but eye the tray of succulent-looking chocolate chip cookies and a big jar marked “Salted Caramels” and containing fat wrapped candy sitting near the register. “I gotta come back for those but first thing’s first,” I mumbled to myself.

Since I’m big into breakfast and the closest thing to it here was an open-faced egg sandwich, I went for that. This one was made with thick heirloom tomato slices and mozzarella on a very hearty piece of homemade bread. In the end, the bread proved too hearty so I just enjoyed the melted cheese over the warm tomatoes. As for the Sightglass coffee, my soy latte was so smooth, no acidity and I couldn’t stop “Mmm”ing every time I took a sip. One of the best cuppas I’ve had ever.

After the meal, I went to the counter to buy us some cookies and caramels but this woman at the register already beat me to the punch. I watched helplessly as the cashier cleaned off the tray and bagged up all 12 cookies. “You’re taking them ALL?” I asked the customer, incredulous. “Yeah, sorry. It’s my friend’s birthday,” she replied. [Bitch!] Fortunately the cashier said that they did have another batch in the back. Pfew! The cookies were as good as they looked, an initial crispness gave way to a very moist interior with melty, rich chocolate chunks. The caramels didn’t taste all that salty but were decadently buttery.

Side note: Outerlands appears to have a wonderful specialty cocktail selection as evidenced by its menu on the chalkboard. Unfortunately since it wasn’t noon yet, I couldn’t bring myself to order one. Next time! 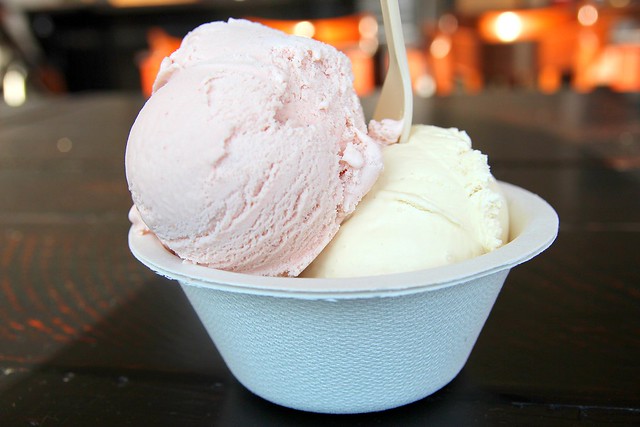 Jennifer was excited to take me to Mr. & Mrs. Miscellaneous, more so for her than me. She’s already a big fan of Bi-Rite Creamery but was still hoping to find something that could top the popular ice cream shop in the Mission. M&MM is located in Dogpatch, an area that Jennifer said can be sketchy so she was intent on visiting the store before sunset. In the early afternoon, it was packed. Small families, couples, friends and bike police were enjoying their ice cream at the communal tables.

Greeting us at the counter was a variety of pastries and candies but I put my blinders on and went for the ice cream flavor board. Ooh! Fernet Branca? Of course! The unofficial San Francisco treat. The counterperson was eager to have us taste a sample. Even though it was listed on the chalkboard as tasting of anise, its flavor was very subtle. I could see how that would be the case so it wouldn’t be off-putting to the uninitiated but I was kinda wishing it came through a little stronger.

The ice cream was so creamy, with a wonderfully smooth texture. “Uh oh, I think this beats Bi-Rite,” Jennifer said. Apparently, in addition to the ice cream’s quality, the scoops here are bigger. Win!

Looking at the menu board, I noticed that they also had floats with a variety of sodas. Wish I saw that sooner so I could have tried the cream soda with the Fernet ice cream. Darn! 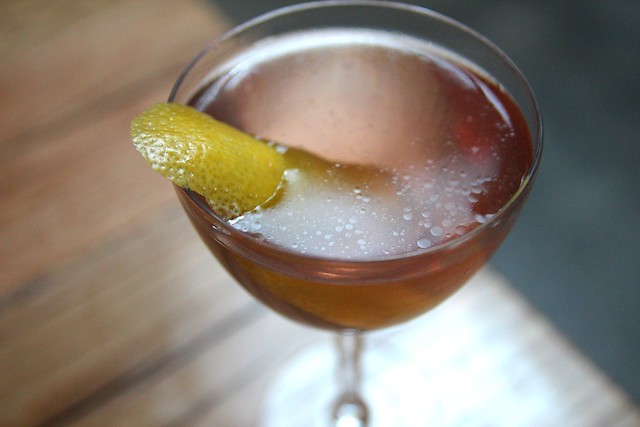 When I first started planning my SF trip several months ago, some Bay Area Tweeps talked about doing a tweetup at famous cocktail bar, Bourbon & Branch. But since we all procrastinated and waited a week before my trip to try and make a reservation, we couldn’t get in. So we decided on Bar Agricole instead since it’s known for its cocktails. We had made a reservation for six but only three of us showed up. Just as well since the bar itself was all full up with every chair taken and we wanted to eat anyway.

Should have just stuck to cocktails though as, frankly, I wasn’t all that blown away by the food. It was OK but not $16 OK, and for such a small portion. Funny how I get irked by pricy dishes but am a bit more forgiving of pricey well-made cocktails. Oh well.

So I asked the server for a drink off the list that’s served up since I was craving something potent and to the point. She recommended the Presidente, a mix of Demerara rum, farmhouse curaçao, grenadine, orange bitters. Oddly enough, I tasted the rum more than anything but I guess the mixers served to smooth out the spirit’s edge. It was sort of like drinking diluted rum. Not watered down but very light.

Suffice it to say, after this experience I wouldn’t exactly put Bar Agricole on the top of my list of SF cocktail bars I must visit again, especially since there are plenty of better ones. Shrugs.

Beretta in the Mission 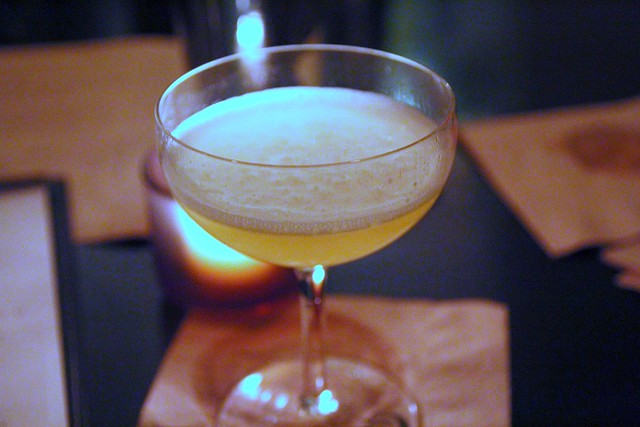 I’ve always heard mention of Beretta anytime someone talks about great cocktail bars in SF (its Rattlesnake drink won SF Weekly‘s award for best cocktail) so naturally we headed over to Mission bar/restaurant after Bar Agricole. Plus it was within walking distance of a jazz club where Jennifer’s friend was singing later that night.

Unfortunately since it was a Friday night and around dinner time, the place was obnoxiously crowded. The hostesses did their best to ignore us as we stood patiently waiting to inquire about a table and the bar was walled in by an inner layer of leisure diners and an outer layer of eager drinkers. Jennifer and I crowded in around SF blogger, Carina, at the bar and tried to shrug off the many folks who brusquely shouldered their way past us to get to the other side of the room.

Jennifer doesn’t drink so she had a mocktail with ginger ale while I went for the Single Village Fix which is made with Del Maguey Mescal, lime, pineapple gomme. It was a smokey, lightly sweet mixture. I liked it well enough but really had my eye on the cocktail Carina ordered: Londsdale with gin, apple, lemon, basil, honey. Since I was really in the gin mood, one sample sip turned into two.

Unfortunately the claustrophobic atmosphere was getting to me so my need to get out of there won out over my need for my own Londsdale.

Pi Bar in the Mission 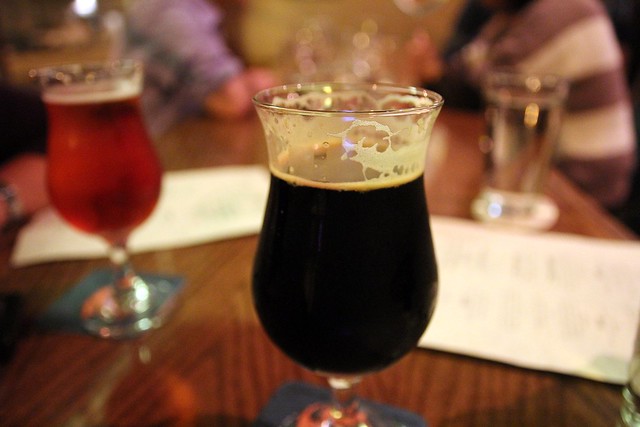 We headed to Pi Bar, a drinking hole that’s Pi-focused (opens at 3:14pm) and known for its beer list and, more importantly, pizza. After the meager portions at Bar Agricole, we could go for a slice of thin crust. We missed the Pi “R” Square special of pint and a slice for $6.28 (Pi2, get it?) which runs every day from 3:14 to 6:28pm but I still didn’t feel put out by a slice ($3.14) with toppings of our choice.

And the ever-changing beer selection with 12 taps and many bottles was squeal-inducing. The server wasn’t especially friendly or attentive and I feared if I asked her about the beers she would roll her eyes and sigh or something. Well at least I knew what I wanted — Stone Imperial Black IPA — and the simple slice hit the spot.

Pi Bar seems like a great place to chill but it’s best if you know what you want so you don’t have to trouble the server.