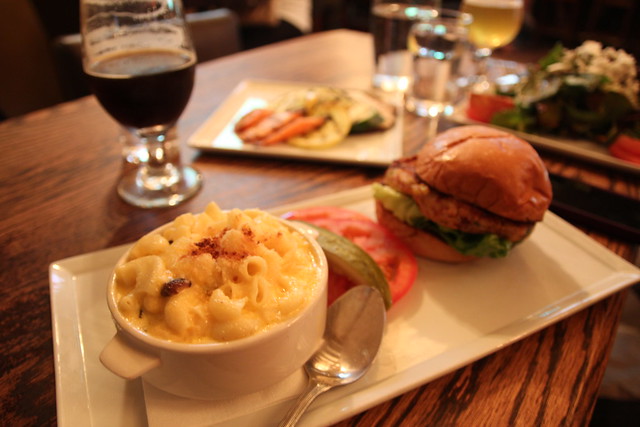 How to make your belly happy.

You’ve had a tough day and you really want to treat yourself to make it all better. Best way to indulge? Chow down on the decadent lobster mac and cheese at Blue Palms Brewhouse in Hollywood. Yup, this craft beer bar not only features 24 awesome beers on tap at any given time but it has delicious food to boot! (Click here for their menu.)

Its lobster mac & cheese can be ordered up as a $7 half order or a $12 full serving. But I like to get it as a side (for an additional $2.50) to the veggie burger because, as it turns out, as much as I love the stuff, the side portion is just the right size. The cheese here is so creamy and not too sharp. The cheese-to-pasta ratio is perfect, as there are some places where either the pasta is left swimming in the cheese or, horror of horrors, there’s so little of the good stuff. And naturally, since it’s a sin to have cold melted cheese, it’s best to enjoy your side first. The burger can wait. Arggh, I’m just salivating looking at that picture. The only thing is that the subtle flavor of the lobster is hidden in the cheese. But I still wouldn’t kick this mac n’ cheese out of bed.

In any case, I highly recommend hitting up BPB during its $4 pint night on Tuesdays when you can get ANY beer off the 24-tap list for only $4 through 10pm! That includes the strong Belgian ones that come in tulip glasses! I took advantage of this deal the Tuesday after their 3rd anniversary party when they had a lot of rare and amazing brews left over. Teh awesome! The best beers and delicious mac ‘n cheese? You’ll forget all your worries in no time.
_
Blue Palms Brewhouse
6124 Hollywood Boulevard
Hollywood, California 90028 (map)
(323) 464-BEER
Facebook: Blue Palms Brewhouse
Twitter: @BluePalms_Brew_