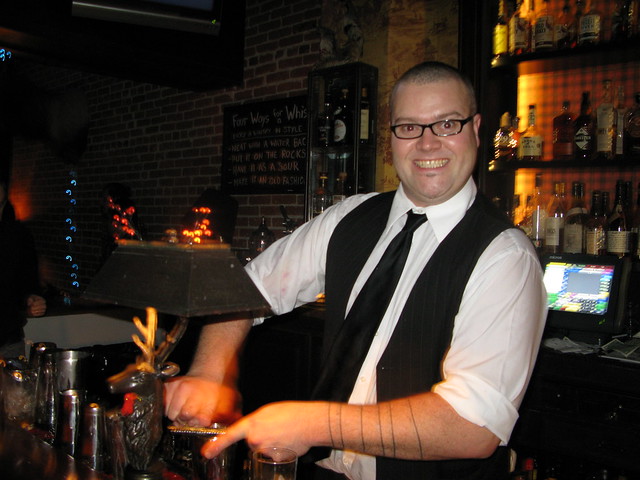 Damian and his winning smile and cocktail-making skills.

So maybe LA missed out on a couple of awards at this year’s Tales of the Cocktail Spirited Awards (Best American Cocktail Bar and American Bartender of the Year) but the boys of Roger Room in West Hollywood brought back the People’s Champion award for Moet Hennessy USA’s 2011 Bar Room Brawl, one of the largest competitions at the annual cocktail industry event! RR bartenders Damian Windsor and Jason Bran and Eric “ET” Tecosky (from Jones) competed against bar teams from Little Branch (NY), The Burritt Room (San Francisco), Sable (Chicago), Eastern Standard (Boston) and Teardrop (Portland), and came up on top, as voted by the people.

Each team had to create four original cocktails using Grand Marnier, Hennessy, Belvedere Vodka and 10 Cane Rum. Here are the Roger Room’s winning cocktails for you to try out at home. Variations of the Spiced Mule and Four Aces are currently on the bar menu but since the other cocktails had appeared in various forms in previous seasonal menus, the guys can do it up for you on request.

King of the Road
By Roger Room, Los Angeles

Add liquid, ice, stir, strain serve on the rocks. Garnish with blackberry on a pick.