Where Have All the L.A. Bartenders Gone? They’re in NOLA for Tales of the Cocktail 2011 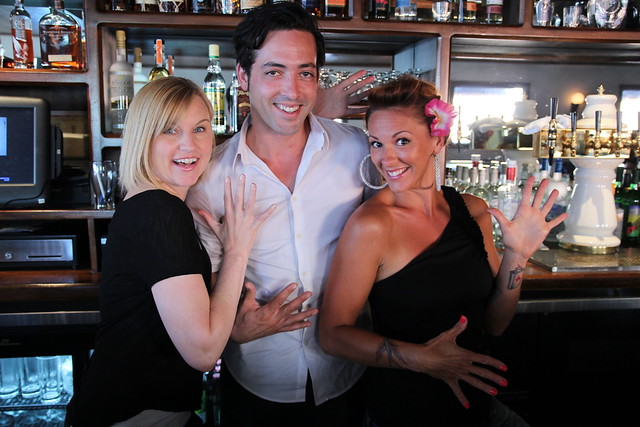 Two out of three Black Market's bartenders pictured here are off in the Big Easy.

If you’re a cocktail geek, chances are you’ve heard of the annual Tales of the Cocktail event in New Orleans and even plan your social calendar around it. Every year drink slingers, liquor companies and cocktail enthusiasts do their liver stretches and build up their alcohol tolerance before descending on the Big Easy for booze-fueled mingling, seminars, parties and competitions. So now through Sunday, when you visit your usual watering hole and wonder where your fave bartender is, he/she is most likely in NOLA. But to save you from that disappointment, here’s a list of which of our esteemed Los Angeles barsmiths will be out of town this week and competing in contests with the hopes of bringing back some impressive titles for L.A.

Next Door Lounge’s Joseph Brooke threw down at the Viva! Sangrita Nationals yesterday. His winningest recipe below.

The Roger Room’s Damian Windsor, Jason Bran and Zach Patterson will go up against three bars from other cities (boo! hiss!) at the Moët Hennessy USA’s Bar Room Brawl on Friday. Last year, LA’s own the Varnish snagged the people’s hearts and choice award so good luck to our guys for holding onto the title for our city.

Nightlife ringmaster Aidan Demarest, also from the Spare Room, is hosting Cointreau and Saveur Magazine’s 2011 Mix-Off Competition on Friday where he’ll announce the Next Bar Star.

Not to say that means there’s no reason to go out cocktailing this weekend. Fortunately there are still ample good bartenders — like Tricia Alley of Black Market,  Matthew Biancaniello of Library Bar, Kiowa Bryan of Eveleigh, Julian Cox of Playa and Rivera and Devon Espinosa of Tasting Kitchen and tonight’s Chaya event — holding down the fort.

If you’re feeling ambitious (and happen to have kaffir lime leaves and the like in your kitchen), here’s Joseph Brooke’s exotic sangrita recipe for you to try at home.