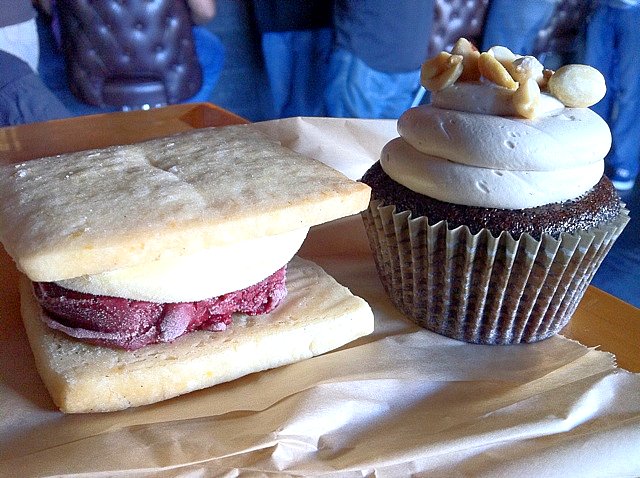 As soon as I heard about the brand-new Father’s Office dessert menu by Lukshon‘s pastry chef John Park at the Los Angeles location, my evening’s plans were promptly put aside so I could go check it out. Enticed with promises of chocolate cupcakes with Rasputin Imperial Stout frosting and unique beer floats made with the same “no substitutions” seriousness as the burgers, I headed straight to the gastropub in the Helms Bakery building in Culver City right after work.

The dessert menu was already prominently displayed on the board over the bar, taking its place beside the food menu and new beer listings. I skipped over the hazelnut-foie gras ice cream sandwiched between two oatmeal raisin cookies (since I’m still on my veggie kick) and went for the chocolate cupcake with the stout frosting ($4) as well as the ice cream sandwich with lemon shortbread, blackberry-cassis sorbet and buttermilk ice cream ($4.50).

Alas there was only one beer float being offered and it was a bit too cha-ching for just me and my bf to split — $18 for a 22-ounce bottle of Ballast Point Sculpin IPA and $3 for a scoop of grapefruit sorbet — plus we weren’t THAT hungry. The idea behind the a la mode beer float program is that you can share the specified bottle with a friend/friends and pay for as many scoops as you want.

A la cart scoops of ice cream/sorbet are NOT available. No ‘cross-pollination.’ Each float is paired to complement flavor profiles so no mixing and matching.

Kinda bummed they didn’t have more beer float options. And I get the whole not wanting to let diners mix and match beers willy nilly but why not at least do a float from a beer that’s available on tap so that solo diners (or those who don’t want that much dessert) can enjoy it, too? Hopefully that will change with time. 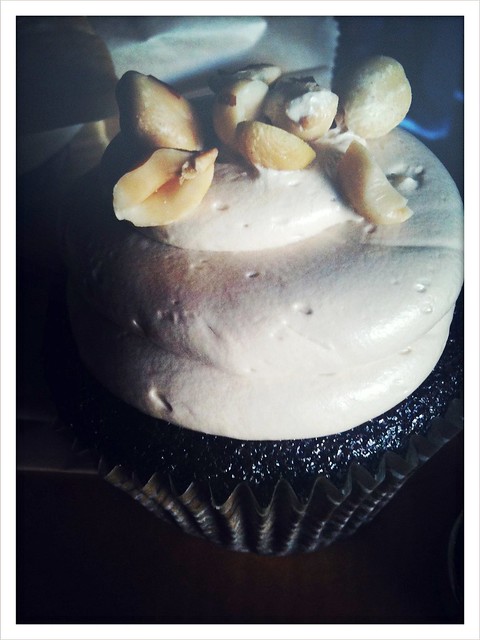 Can't taste the beer in that frosting.

Anyway, on to the Father’s Office desserts I did have. Oddly enough I actually preferred the shortbread ice cream sandwich to the chocolate cupcake. Sure, the cupcake’s cake was moist and rich but its frosting was like whipped air. I couldn’t taste the stout which Grubstreet LA had described in its review as making “the frosting taste just a little bit bitter, with a very light and creamy body at the same time.”

Hm, somehow I missed that. Nope, here I could only taste the peanuts that garnished the cupcake. I was tempted to scrape off the frosting altogether, something I NEVER do. Fortunately that cake was perfection.

The shortbread cookie ice cream sandwich was a bit of a struggle to eat initially because of the hard ice cream and harder shortbread but after letting it thaw in its brown wrapper a bit it was easy to enjoy the summery flavors of the lemon cookie, berry sorbet and creamy ice cream. Definitely my favorite…over the chocolate cupcake! What gives?

Apparently the Father’s Office dessert menu is currently only available at the Los Angeles restaurant but will some day also show up at the Santa Monica location. 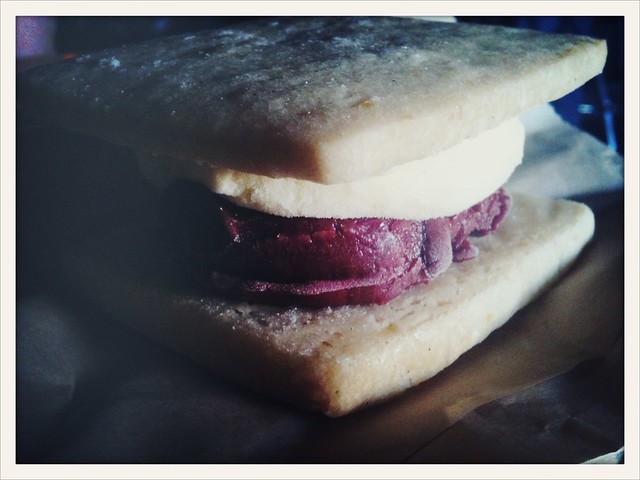